News Staff
By using infrared wavelengths, the HAWK-I infrared imager mounted on ESO's Very Large Telescope (VLT) in Chile was able to capture this image of the star cluster RCW 38.

RCW 38 is over 5,00 light years away (look toward the constellation Vela) and is composed of several short-lived massive stars that will eventually supernovae, but also has some 8,000 other x-ray emitting objects.

HAWK-I is installed on Unit Telescope 4 (Yepun) of the VLT, and operates at near-infrared wavelengths. It has many scientific roles, including obtaining images of nearby galaxies or large nebulae as well as individual stars and exoplanets. GRAAL is an adaptive optics module which helps HAWK-I to produce these spectacular images. It makes use of four laser beams projected into the night sky, which act as artificial reference stars, used to correct for the effects of atmospheric turbulence -- providing a sharper image. 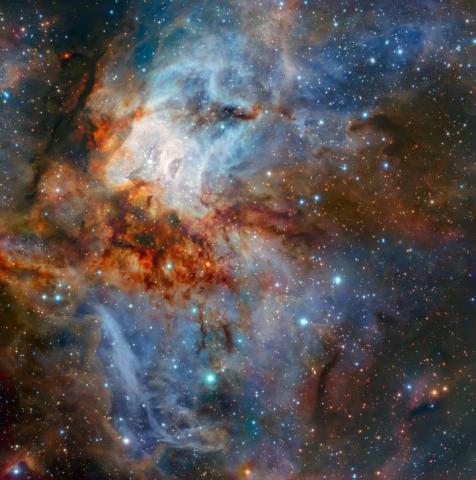 The central area of RCW 38 is visible here as a bright, blue-tinted region, an area inhabited by numerous very young stars and protostars that are still in the process of forming. The intense radiation pouring out from these newly born stars causes the surrounding gas to glow brightly. This is in stark contrast to the streams of cooler cosmic dust winding through the region, which glow gently in dark shades of red and orange. The contrast creates this spectacular scene -- a piece of celestial artwork.

This image was captured as part of a series of test observations for HAWK-I and GRAAL. These tests are an integral part of the commissioning of a new instrument on the VLT, and include a set of typical scientific observations that verify and demonstrate the capabilities of the new instrument.
News Articles
More Articles All Articles
About