News Staff
Beer has been important throughout human history. Given how dangerous water was in the past, it is arguably true that civilization would not exist without beer.

Yet if you make your own, you have to think about waste. Spent grain, the malt and adjuncts left over from the mash, is 85 percent of brewing waste. If you don't have a compost pit or a farm somewhere close by, it's going inro the garbage.

Since craft brewing, and ever more bitter IPA beers, has become a huge fad, there has been a big surge in spent grain. Spent grain is up to 30 percent protein and up to 70 percent fiber, fine for cows but a real struggle for humans. New results show the protein and fiber can be separated from brewer's spent grain and used to create new types of protein sources, biofuels and more. 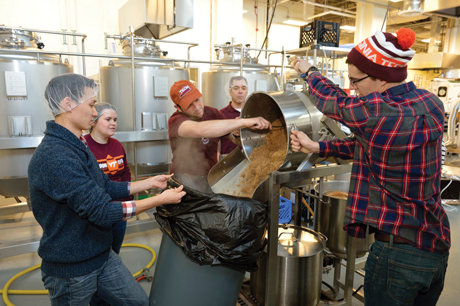 A Virginia Tech student spoons spent grain from the brewhouse container into a trash can while classmates look on. The new work hopes to throw less into landfills. Credit: Virginia Tech

The researchers developed a wet milling fractionation process to separate the protein from the fiber. Compared to other techniques, the new process is more efficient because the researchers do not have to dry the grain first. They tested three commercially available enzymes -- alcalase, neutrase and pepsin -- in this process and found that alcalase treatment provided the best separation without losing large amounts of either component. After a sieving step, the result was a protein concentrate and a fiber-rich product.

Up to 83 percent of the protein in the spent grain was recaptured in the protein concentrate. Initially the researchers proposed using the extracted protein as a cheaper, more sustainable replacement for fishmeal to feed farmed shrimp. They began to explore using the protein as an ingredient in food products, catering to the consumer demand for alternate protein sources.

They got a species of Bacillus lichenformis from a spring at Yellowstone National Park. In the paper, they noted that the bacteria could convert various sugars to 2,3-butanediol, a compound that is used to make many products, such as synthetic rubber, plasticizers and 2-butanol, a fuel. So, they pretreated the extracted fiber with sulfuric acid, then broke it down into sugars from cellulose and hemicellulose. They then fed the sugars to the microbe, producing 2,3-butanediol.

Will it scale? Is it economically feasible? Not yet, the enzymes are expensive, but this is basic research, so turning it into applied science would need to be done by the private sector.
News Articles
More Articles All Articles
About