News Staff
There is a war on opioids and legitimate pain patients have been caught in the stigma of recreational abuse. High-profile class action lawsuits against drug manufacturers are going to create an "icy chill" for pain medication just as they ran antibiotics out of the country.

But perhaps new approaches from other nations will fill that gap. A new paper discusses a fungus, a previously unknown Penicillium sp MST-MF667, sampled from an estuary in Tasmania's pristine Huon Valley, with a set of uniquely shaped (LDLD chirality) tetrapeptides mimicking endomophins. They developed it into a new opioid type with fewer side-effects and created an effective analgesic for pain relief - at least in the laboratory.

From the fungus, the researchers discovered three versions of tetrapeptides, a chain of four amino acids (the 'molecular building blocks of life) joined by peptide bonds. But it was their curious molecular structure that caught the researchers' attention. 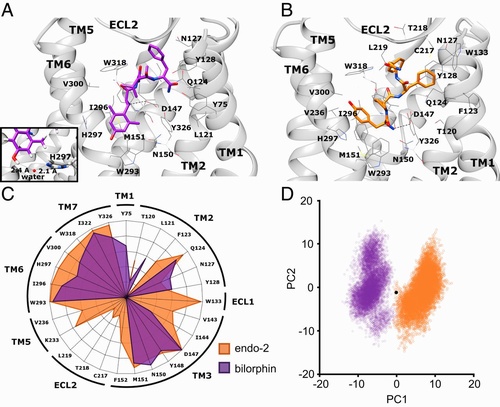 Predicted binding poses of bilorphin (purple) (A) and endomorphin-2 (orange) (B), and the positions of the surrounding binding pocket residues (gray) obtained after molecular docking and 1 μs of MD simulations. The salt bridge between the protonated amine of the ligands and Asp1473.32 is marked as a dashed black line. TM7 has been removed for clarity. (C) Ligand–residue interaction fingerprints for the bilorphin–MOPr complex (purple) and endomorphin2–MOPr complex (orange). Data are expressed as the percentage of simulation time each residue is within 4.5 Å of the ligand, with points radiating outwards from 0 to 100% in 20% increments. (D) Principal component analysis was performed on the alpha carbons of the receptor transmembrane domains, before projecting the receptor conformations at each simulation time point onto PC1 and PC2. The bilorphin–MOPr complex is in purple, the endomorphin-2–MOPr complex in orange, and the black point indicates the conformation of the inactive MOPr model to which the peptides were docked.

In some molecules, geometric orientation is referred to as chirality or 'handedness'. Molecules can be 'left handed' or 'right handed', mirror images of each other, but the way they are orientated makes a huge difference. In nature, almost all amino acids are 'left-handed' in shape.
There are exceptions in nature, with molecules twisted in the 'right hand' orientation, but this is extremely rare in mammals. The ones that were found in the fungus were twisted in this unusual way.

According to senior author and University of Sydney Professor Christie, "No one had ever pulled anything out of nature, anything more ancient than a vertebrate that seemed to act on opiate receptors - and we found it."

Finding the fungus in the estuary

The sample that prompted the research had been taken from the Tasmanian estuary as part of a program involving Professor Rob Capon, a natural products chemist from UQ's Institute for Molecular Bioscience.

University of Queensland Professor Rob Capon had been part of a program that screened dirt and mud for microbes with biological activity, and 16 years ago found the molecule from penicillium fungus isolated from mud next to a boat ramp.

Under the microscope it looked like the molecules in our body that interact with the opioid receptor. And then basic research began.

Of course, drug companies will have to take this basic research and spend a fortune to develop it and then hopefully go to clinical trials, where they will spend a billion dollars and up to 15 years to get government approval. The same drug companies we have been taught to hate.
News Articles
More Articles All Articles
About