News Staff
There is no question depression can have physical effects but it is unclear how much of depression is caused by biology and how much is psychology.

A new study finds there are increased amounts of an unmodified structural protein, called tubulin, in lipid rafts, fatty sections of a cell membrane, compared with non-depressed individuals. Tubulin is part of a protein complex that provides structure to cells. This complex also is involved in binding a specific protein called Gs alpha, or Gsa, which is a signaling molecule that conveys the action of neurotransmitters like serotonin.

Previous work showed that high levels of Gsa were in the lipid rafts of depressed individuals and that Gsa lost effectiveness when in those lipid rafts. Gsa moved out of the lipid rafts after treatment with antidepressants or after using a drug inhibitor for histone deacetylase 6 (HDAC-6) -- an enzyme that removes modifications from tubulin -- suggesting a role of tubulin in depression as well.

Researchers analyzed post-mortem brain tissue from individuals with and without a diagnosis of depression to determine the location and degree of modified tubulin. A subgroup for depression also included individuals who died by suicide. They found a profound decrease in the extent of acetylated tubulin in lipid raft membranes from brains of all depressed subjects. 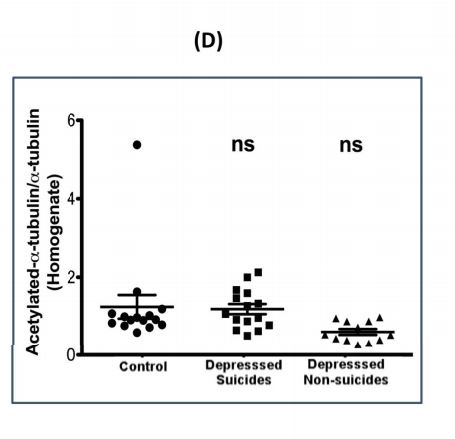 α-tubulin acetylation status in postmortem brain prefrontal cortex derived from 552 normal and depressed suicides: Prefrontal cortex tissue from control (normal subjects), 553 depressed suicides and depressed non-suicides were homogenized (H), run on SDS-PAGE gel 554 and transferred to nitrocellulose for detection with either acetyl-α-tubulin or α-tubulin antibodies. 555 The signal intensity was quantified and scatter plots used to show the extent of tubulin acetylation 556 in each group (ns=non-significant compared to control).

In all groups, there were no significant changes in the amounts of modified alpha tubulin, HDAC-6, or alpha tubulin acetyltransferase 1 -- a protein that adds modifications to tubulin. However, there was less modified tubulin found in the lipid rafts of both depression groups versus the non-depressed group.

The data suggest that diminished tubulin acetylation may be essential in harnessing Gsa to lipid rafts during depression. Antidepressants reverse this process and allow fuller function of Gsa and the neurotransmitters that activate it.
News Articles
More Articles All Articles
About