The Extraterrestrial Way The Atacama Desert Got Its Sheets Of Glass
By News Staff | November 2nd 2021 02:56 PM | Print | E-mail

News Staff
In the Atacama Desert in Chile east of Pampa del Tamarugal, a plateau in northern Chile nestled between the Andes Mountains to the east and the Chilean Coastal Range to the west, fields of dark green and black glass inhabit a corridor stretching for 30 miles. If you've ever seen a glassblower at work, you know high heat will do the trick, but lacking a crucible 12,000 years ago, it has been a mystery what provided the 2,400 degree heat needed to turn the sand into molten glass that then solidified.

A new study finds it was not of this earth.

Samples of the desert glass contain tiny fragments with minerals found in rocks of extraterrestrial origin, minerals that closely match the composition of material returned to Earth by NASA’s Stardust mission to the comet Wild 2. The team behind the work conclude that the glass was created by the thermal radiation and winds from a fireball exploding just above the surface. It was no ordinary bolide fireball. 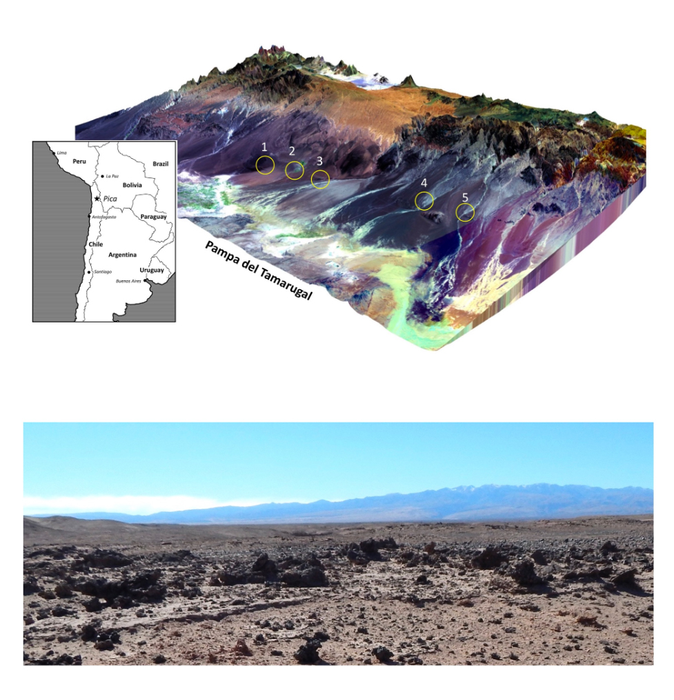 Lacking any evidence for volcanic activity, some researchers had posited that the glass resulted from ancient grass fires, before the region was desert. During the Pleistocene epoch, there were oases with trees and grassy wetlands created by rivers extending from mountains to the east, and it’s been suggested that widespread fires may have burned hot enough to melt the sandy soil into large glassy slabs.

But the amount of glass present along with several key physical characteristics made simple fires an impossible formation mechanism. The glasses show evidence of having been twisted, folded, rolled and even thrown while still in molten form. Rather than a volcano or a fire, it’s consistent with a large incoming meteor and airburst explosion, which would have been accompanied by tornado-force winds. The mineralogy of the glass casts further doubt on the grassfire idea. Detailed chemical analysis found minerals called zircons that had thermally decomposed to form baddeleyite. That mineral transition typically happens in temperatures in excess of 3,000 degrees Fahrenheit — far hotter than what could be generated by grass fires, Schultz says.

The analysis also turned up assemblages of exotic minerals only found in meteorites and other extraterrestrial rocks, the researchers say. Specific minerals like cubanite, troilite and calcium-aluminum-rich inclusions matched mineral signatures from comet samples retrieved from NASA’s Stardust mission.

“Those minerals are what tell us that this object has all the markings of a comet,” said Scott Harris, a planetary geologist at the Fernbank Science Center and study co-author. “To have the same mineralogy we saw in the Stardust samples entrained in these glasses is really powerful evidence that what we’re seeing is the result of a cometary airburst.”

Tentative dating puts the impact right around time that large mammals disappeared from the region.
News Articles
More Articles All Articles
About