News Staff
How did the most famous concept devised in neurobiology--the homunculus of neurosurgeon Wilder Penfield - originate?

Some answers derive from assessing Penfield's archives at the Osler Library of McGill University, as well as the only known copy from which the beginnings of the homunculus may be traced--Edwin Boldrey's 1936 McGill master's degree thesis supervised by Penfield.

The iconic homunculus was devised by Penfield as a teaching tool to aid memory, and was drawn by Hortense Cantlie, a medical illustrator at McGill. She rendered the complex idea simply for its first appearance in 1937 as an acrobat hanging from a trapeze by his knees, with his head tilted up to look at the audience. The areas devoted to the opposable thumbs, necessary for grasping tools, and to the tongue and lips, necessary for speech, are disproportionally large, reflecting their relative importance with respect to human experience.

Boldrey, one of Penfield's neurosurgery trainees, wrote the analysis of the largest and most intricately studied collection of intraoperative stimulations and mappings during human brain surgery ever performed up to that time and his thesis provides an incredible record of electrical brain stimulations of over 100 patients studied from 1928 to 1936 during open brain surgery, and includes later additional cases. Each stimulation point was assigned to one of 28 brain maps, each representing a specific function. These included movement and sensation of the tongue, mouth, jaw, face, and throat; swallowing; vocalizing; and sensation and movements of fingers, hand, arm, shoulder, trunk, leg, and foot.

Vision and audition were also represented, as were autonomic functions and head and eye movements. Each stimulation point was placed on the appropriate composite map according to its distance from the sylvian and rolandic fissures, thereby creating a cluster diagram of individual data points. In this way, probabilistic maps with widely outlying points were created, a reflection of the individual variations that one sees in grouped data obtained from biological systems. 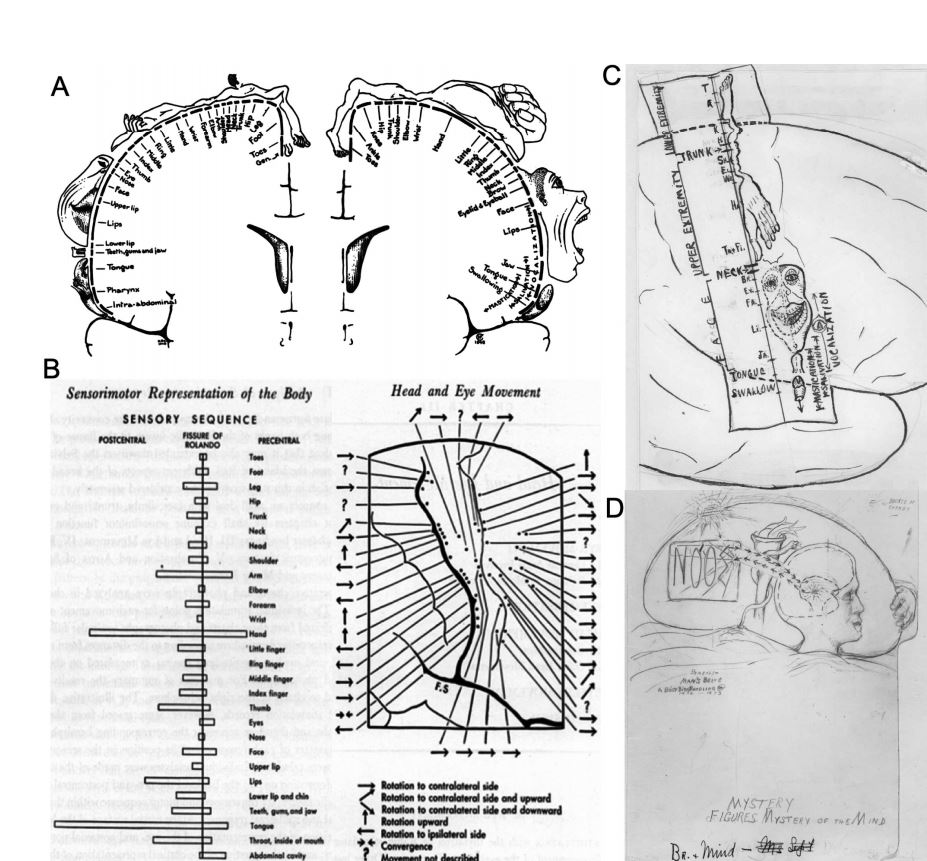 Drs. Mark Preul, Gurpreet Gandhoke, and Richard Leblanc state, "Penfield's homunculus is a symbol of the extraordinary efforts that were expended in the exploration of the conscious human brain, which was achieved with the most rudimentary technology, and captured the imagination of succeeding generations of neurobiologists. One of Penfield's greatest contributions may be that he sought to explain the mysteries of the brain to everyone, as proclaimed by his own notes and letters, and he realized that there was no better way to understand cerebral functional organization than by a humanoid mnemonic, 'the sort of thing that people in general understand,' as he wrote in his letters. Boldrey's thesis is one of the most remarkable publications in the history of neuroscience and provides a fascinating window into the origin of the extraordinarily influential and endearing concept of Wilder Penfield's homunculus."
News Articles
More Articles All Articles
About