Nicholas Staropoli
Someone forgot to tell James Beck that Oceanographers are supposed to work near an ocean.

Beck, the CEO of Missoula, Montana-based Sunburst Sensors, LLC, took home both first prizes at this week's Wendy Schmidt Ocean Health XPRIZE.The award is named after Wendy Schmidt, the President of The Schmidt Family Foundation and the competition received entries from all across the world, challenging teams to develop instrumentation that could measure the ocean pH in both shallow and deep waters. A $2 million purse was split into two categories (1 million apiece; $750k for first and 250K for second): accuracy and affordability. Sunburst Sensors swept both categories.The competition launched in September 2013 and proceeded through 4 phases, with teams being eliminated along the way.

The final stage was conducted off the coast of Hawaii in April of this year and had five finalists competing to see whose pH sensor performed the best at an ocean depth of 3,000 meters.

The victor, Sunburst Sensors, is a small company (<10 employees) and have historically focused on making sensors that detect amounts of CO2 in freshwater. Beck told us that it was a challenge to convert their existing sensors, which were made to read at 600 meters, for such extreme conditions. They succeeded, sweeping both categories and bringing home $1.5 million in combined prizes. 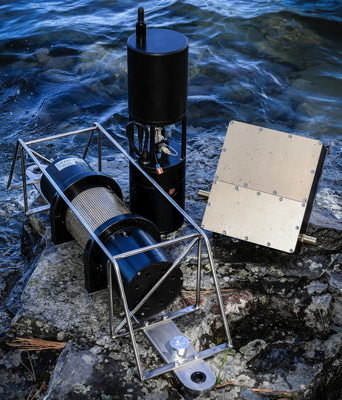 ANB of Britain, a group that spent a reported 2 weeks on their prototype, finished in second in the affordability category while Team Durafet, a conglomerate of several oceanography groups, placed second in the accuracy category.

XPRIZEs have been given out in a variety of categories dealing with incentivizing innovation in science and technology. Notably, they have given out awards previously for advances in categories as diverse as aerospace travel to oil cleanups.They have targeted ocean health and, in particular, ocean acidification because it is a problem that can have far reaching effects, but is also very data poor. Ocean acidification is happening due to rising CO2 emissions, which dissolves into the ocean and lowers the pH. The same process occurs in your blood. As much as 30 percent of all CO2 emissions are dissolved in ocean waters.In some areas, such as temperate oceans, ocean acidification is well documented. However, in many areas, like the deep sea, the effect of acidification is poorly understood. Most of the instrumentation on the market currently is expensive and inefficient.

The goal of the competition was to create better instrumentation that will equip researchers and scientists with more data on the extent and the patterns of ocean acidification. At last night’s award dinner, a panel of industry experts discussed what more data will mean to oceanography and society as a whole. The long term goal is to develop models that can forecast local ocean pH days in advance. Many industries will benefit from having this type of information: fish farming, tourism, medical and pharmaceutical, and even the military.

The panelists also noted that the need for more data is paramount to oceanography because of how little we currently know about our oceans. One example used to illustrate this is the fact that we have yet to find the remains of the Malaysian Airlines flight 370 which presumably crashed in the Indian Ocean in March of 2014.
Nicholas Staropoli
More Articles All Articles
About