How Will Anti-Science Activists Treat GMO Humans Of The Future?
By Nicholas Staropoli | November 2nd 2015 09:34 AM | Print | E-mail

In the 1970s, scientists used genetic modification to insert the gene for human insulin production into yeast and bacteria cells. They turned those cells into tiny insulin factories, meaning insulin no longer had to be created from animal pancreases, which created allergy issues. This was a breakthrough for science and two generations of people have benefited from this GMO insulin.

Cut to 2012. General Mills attempted to engage Cheerios fans on Facebook as part of a PR campaign around the question "What do Cheerios mean to you?" and instead of being a positive, the company received a barrage of backlash from anti-GMO activists who hijacked the campaign and turned the General Mills Facebook page into an anti-biotech forum. The content of the comments were nothing new if you read comments on anti-GMO sites: “Not welcome in my home”, “I won’t let my child eat them”; “I have the right to know when a food has been modified.” 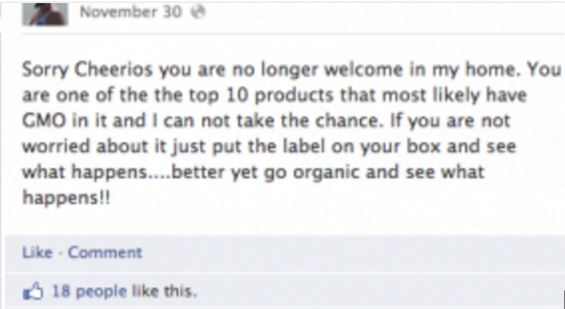 The bizarre thing. Cheerios contain no GMOs, they are made from oats. There are no GMO oats.

Regardless of the science, ardent GMO critics maintain a level of disdain for anything genetically modified that is usually only reserved for the likes of rodents and roaches, and what they want is made abundantly clear: all GMO products should be banned, or failing that, labeled so they can avoid them like the plague.

Unfortunately, labeling GMOs is not as simple as placing a warning label on every Chipotle burrito. Nor is it as simple as putting one on insulin pumps. Is it ethical to label genetically modified people? Is it necessary? And more importantly, given the way in which anti-GMO activists treat plants with genetic modifications, the question must be asked: how will these activists treat genetically modified humans?

Who are these GM Humans?

If the phrase ‘designer baby’ came to mind when reading the above paragraph, than you are a little off the mark. It is true that we may be very close to editing the genome of human embryos. Earlier this year a group of Chinese researchers claimed to have successfully used CRISPR-Cas9 to edit a human embryo and researchers in Britain recently requested permission to do the same. However, that is an ethical quagmire I am going to avoid.

The technique that I am referring to is gene therapy. If you are unfamiliar with gene therapy, it is a precise genome editing technique used to cure diseases which are caused by a faulty gene or genes. Scientists develop a vector (usually a modified virus like the Adenovirus) that will infect cells–sometimes just one cell type but it can be the whole body too. The vector then can either replace a faulty gene with a functional copy or insert simply insert the functional version. If you are familiar with how a GMO plant is made using the Agrobacterium as a vector then this process will sound very familiar to you.

So how close are we to successful gene therapy on humans? The short answer is there already are.

Recently, a company called Spark Therapeutics announced its intention to file for FDA approval in early 2016 for their drug, SPK-RPE65, which is a gene therapy for the treatment of a form of Leber’s congenital amaurosis (LCA). The announcement came with news that the treatment had passed a late stage clinical trial with flying colors. SPK-RPE65 targets photoreceptor cells (i.e. rods and cones) in the eye where it replaces a faulty RPE65 gene which codes for an enzyme that is vital to sight. Currently there is no treatment.

People with a mutation of this gene have night blindness. People who have participated in these clinical trial are GMOs. These People now have(or temporarily had) their vision restored. When the drug is approved next year many more People will have the same opportunity.

Some may argue that SPK-RPE65 only targets a small population of cells inside one organ, so these people don’t really constitute a GMO in the way Bt or Roundup Ready Corn are GMOs. However, both corn types only produce their inserted proteins during short windows, while the inserted RPE65 is needed frequently for normal vision at night.

Furthermore, many subsequent gene therapies will target much larger numbers of cells. Muscular dystrophy is a potential target to be cured by gene therapy in which every muscle cell will need to receive a functional version of the gene for the protein dystrophin. A recent study showed a gene therapy in dogs that successfully delivered the gene to every single muscle cell, clearing the way for eventual trials in humans.

Many other gene therapies face imminent approval. According to one 2012 report there were over 1,800 clinical trials ongoing in the 31 countries for gene therapies and the list for diseases they aim to cure is inspiring: sickle cell anemia, cystic fibrosis, Huntington’s disease, severe combined immunodeficiency and hemophilia. Many cancers have the potential to be cured using similar genome editing techniques. HIV may also cured in a similar way eventually.

What reaction awaits these people from anti-GMO activists?

If anti-GMO activists are consistent with their treatment of GMOs then there is no telling what lengths they will go to in order to ostracize these genetically modified humans.

Will they donate millions to fund groups that attempt to eliminate their existence?

Will they campaign and lobby to have the government label them as GMOs? Scarlet letter anyone?

Will they gather by the million to protest their existence in cities around the world like they have with the March Against Monsanto rallies?

Will they burn down hospitals and labs where gene therapy clinical trials are occurring in the way they burned fields that were testing Golden Rice?

Maybe the response will be more subtle. They may try to denote those people lucky enough not to need a gene therapy with a ‘non-GM-human gold star’, but that approach didn’t pan out too well for the sneetches?

Maybe it will just be cyber bullying on social media pages with reminders in their profile pictures that genetically modified humans aren’t welcome in their homes or near their children.

In truth I don’t expect anti-GMO activists to do any of the above. I expect the activists will treat genetically modified people with the same respect and dignity any normal,moral person would treat someone with a rare and life-threatening disease. The point of this is to discuss the basic logical inconsistencies the anti-GMO movement has, as well as point out what is really at the core of their movement.

Not all GMOs are the same, because modification is a technique not a result. Every baseball player uses a wooden bat, but not every swing is a home run.

After modification, an organism is altered by a change in their genome. It doesn’t matter if it is done via a gene therapy, or a gene gun, or the Agrobacterium doing this in the lab or in nature, or mutagenesis. The ‘how’ should not be judged. Instead the ‘what’ should be judged. Is the final altered product better for the farmer? the seller? the consumer? and society? If the answer is yes to all of these then it should receive our support. Golden Rice fits this description in the same way SPK-RPE65 does. Society is improved by the presence and availability of both.

Unfortunately, the previous paragraph will not register with the anti-GMO activists. Their disdain for GMOs is not because they believe the technique is dangerous or harmful. Their opposition is based in preserving and even enhancing the profit margins for their billion dollar industry. Since gene therapy means no reduced profit margin for organic crops, they have no reason to oppose it.

On the other hand, I could be wrong about that and they could attack these people. After all, they did go after type one diabetics who used GMO produced insulin.

Research associate at the American Council on Science and Health.