Bente Lilja Bye
Extreme Geohazards – what are they?
In December 2004, we all learned one Japanese word; tsunami  (津波, lit. "harbor wave"). Japan has seen a number of tsunamis through out times, situated right there on the Ring of Fire, and when the Sumatran earthquake hit the ocean floor in the Indian ocean in 2004 creating the monster waves killing some 300 000 people, tsunami became a household Japanese word, included in many languages. 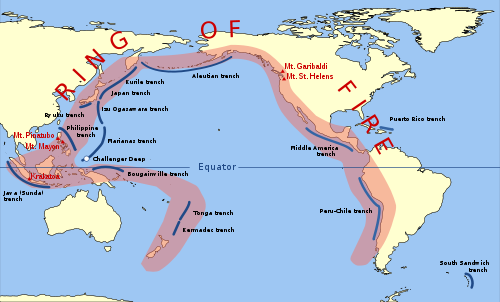 The Ring of Fire is an area where large numbers of earthquakes and volcanic eruptions occur in the basin of the Pacific Ocean.

I visited Japan for the first time in 2001 and I did notice some signs showing a simplified wave when I was walking the streets of picturesque Kamakura, a coastal city a little south of Tokyo. I did not understand what they meant until later, in 2004, when I was catapulted into the field of tsunamis and early warning systems. At the time I was Director of the European Sea Level Service, a network of tide gauges measuring sea level. Sea level change together with seismic activity and crustal movements are the basic variables describing this geohazard.

What is a geohazard?
Geohazards can be defined as events related to the geological state and processes that may cause loss of lives as well as material and environmental damages. These geohazards all arise from global geological processes inside the Earth, driving deformation and displacement of its crust. Underneath the thin crust the Earth consists of a sticky fluid of melted rock we call the mantle that turns and twists like boiling water in slow motion, causing the crust to move ever so slowly.

Conceptual drawing of assumed convection cells in the mantle. Compared with boiling of water. Credit: USGS

The crust is divided in different plates (tectonic plates) and when these plates interact the resulting crustal movement can cause earthquakes, allow volcanoes to erupt and set off landslides. All of these three; earthquakes, volcanoes and landslides can trigger tsunamis if they happen in or close to the ocean. These four geohazards are what I call the Fantastic Four in Planet Earth: Extreme Beauty – Extreme Danger.

Earthquakes: Fractures in Earth's crust, or lithosphere (its crust and upper mantle), where sections of rock have slipped past each other are called faults. Earthquakes are caused by the sudden release of accumulated strain along these faults, releasing energy in the form of low-frequency sound waves called seismic waves. A major earthquake are usually followed by aftershocks. The epicenters of large earthquakes are normally located along known seismically active zones, although the disruptive effects of an earthquake may extend over areas 100s of kilometers away. Earthquakes may cause liquefaction, landslides, marine landslides and tsunamis.

Volcanoes: A volcano is defined by an opening in the Earth's crust from which lava, ash, and hot gases flow or are ejected during an eruption. Volcanic hazards vary from one volcano to another and from one eruption to the next. The big killers are pyroclastic flows, lahars, and tsunamis triggered by volcanic eruptions. The most frequent lethal events are so-called tephra explosions – very rapid jets of lava .  The longest-lasting damage is usually inflicted by thick lava flows or major collapses of volcanic edifices, as at Mt. St. Helens in 1980.


Volcanoes are spectacular sights. This is from Hawaii.

Landslides: A landslide is a geohazard that involves the breakup and downhill flow of rock, mud, water and anything caught in the path. Landslides are one of the main processes by which landscapes evolve and the related hazards result in a complex, changing landscape. Landslides both vary enormously in their distribution in space and time, the amounts of energy produced during the activity and especially in size. This means that the resulting surface deformation or displacement varies considerably from one type of instability (that trigger the breakup) to another. Individual ground instabilities may have a common trigger, such as an extreme rainfall event or an earthquake, and therefore occur alongside many equivalent occurrences over a large area. This means that they can have a significant regional impact. 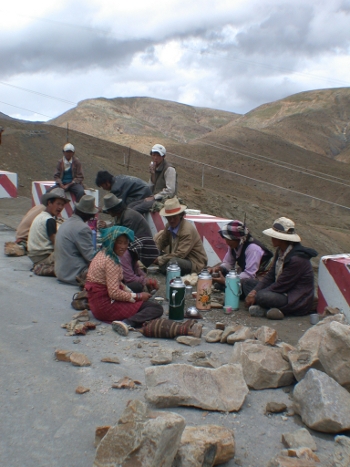 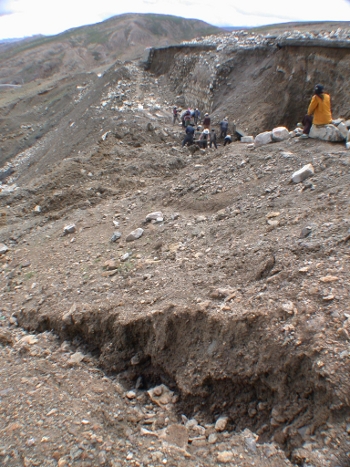 Tsunamis: Tsunamis are gravity waves (different physical features than wind induced surface waves) created by a rapid displacement of a water column. The displacement can be the result of earthquakes, volcanic eruptions or landslides. These energetic waves travel fast with long wavelengths and relatively small amplitudes in open ocean. When hitting shallow water they build up an amplitude and can become tens, and on very rare occasions, even hundreds of meters high. The coastal inundation can be devastating and catastrophic.

Extreme geohazards
The Sumatran earthquake/Indian ocean tsunami was one of the most extreme geohazard in modern history (see list of earthquakes). This extreme reached us all, beyond the mere geophysical waves. As tourists come from all over the world to visit the beautiful shores of the Indian ocean, the 2004 tsunami affected people from around the globe. The extent of it's destruction and the dimension of the disaster are parts of the definition of extreme. That, combined with their physical features that normally are several orders higher or more powerful than the average geohazard. So, when we talk about extreme geohazards we not only refer to the physical characteristics of the geohazard but also the risk they represent in terms of consequences of this hazard. 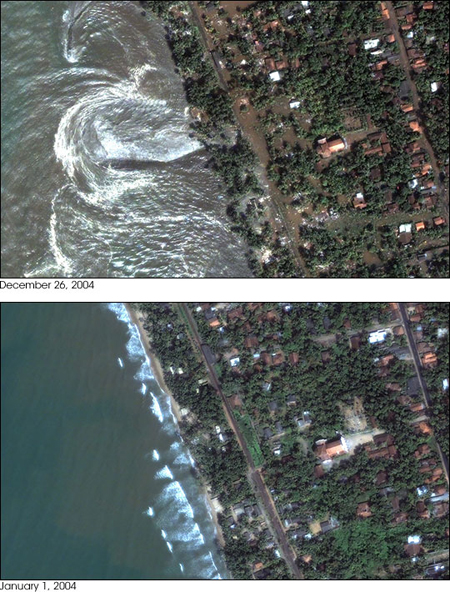 DigitalGlobe’s Quickbird satellite captured an image of the devastation around Kalutara, Sri Lanka (top), on December 26, 2004, at 10:20 a.m. local time—about an hour after the first in the series of tsunami waves hit. Credit: DigitalGlobe

Chilean 1960 earthquake/tsunami is considered the largest – or most extreme – geohazard and natural disaster in modern history. Since there were several warning foreshocks the earthquake itself did not take that many lives, but the tsunami came as a surprise and in turn led to the construction of the Pacific tsunami early warning system.

The 7.8 magnitude earthquake in Tangshan, China, in 1976, is the most deadly earthquake ever recorded. The number of deaths is however unclear (I've seen between 250 000 - 800 000) to date as the Chinese for political reasons towards the end of the Cultural Revolution did not want to deal with the disaster other than saying that the disaster stricken would and should rescue themselves etc.

Really extreme geohazards – megastunamis and supervolcanoes
Norway is situated in a safe distance from the Ring of Fire. Crustal movements in this part of the world are very slow stemming from post glacial rebound, the uplift of ground due to the absence of heavy glaciers that melted thousands of years ago. Norway has in fact a rather high number of earthquakes as well but these far from qualify as extreme geohazards. But, if we look at the geological history of Norway we find evidence of a really extreme geohazard. More than 8000 years ago, the submarine Storegga landslide caused a wide ranging megatsunami hitting most of our entire coastline. 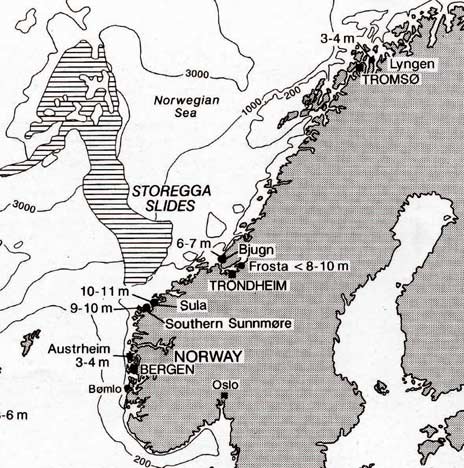 The dimension of both the Storegga slide itself and the resulting tsunami is almost incomprehensible. We cannot even begin to think what damage such a tsunami would do to Norwegian oil industry, fisheries and our coastal population if it would have taken place today.

Moving over the North Atlantic and almost to the West coast of the US in Wyoming, we find the beautiful Yellowstone national park.  Yellowstone is known for its wildlife and its many geothermal features such as geysirs. This park is namely situated on the top of a vast calderas from several volcano eruptions so big that Yellowstone merits the name supervolcano. Yellowstone is monitored by scientists that for obvious reasons find this place particularly interesting, and they report that there are no signs that indicate the supervolcano is about to erupt any time soon. 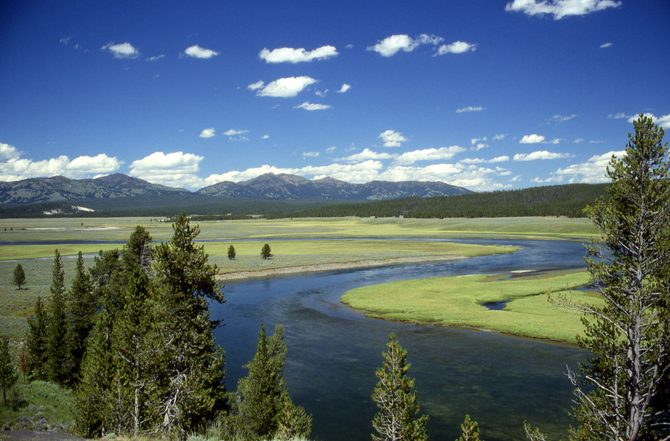 Today Yellowstone seems like the most peaceful spot on the planet, but looking closer (and being a geoscientist) you'll find evidence of a dramatic past. The Yellowstone supervolcano last erupted 650 000 years ago, the calderas covering an area of 55x 72 km.

There are several other fascinating geohazards of great dimensions such as Santorini in Greece, Lake Toba in Indonesia and several others.

The author is attending the European Science Foundation - COST high-level conference "Understanding Extreme Geohazards: The Science of Disaster Risk Management Cycle." at Sant Feliu de Guixols in Spain. The conference takes place on a location that has "Eden" in its name - and it is living up to its name in sharp contrast to the topics discussed at the conference! 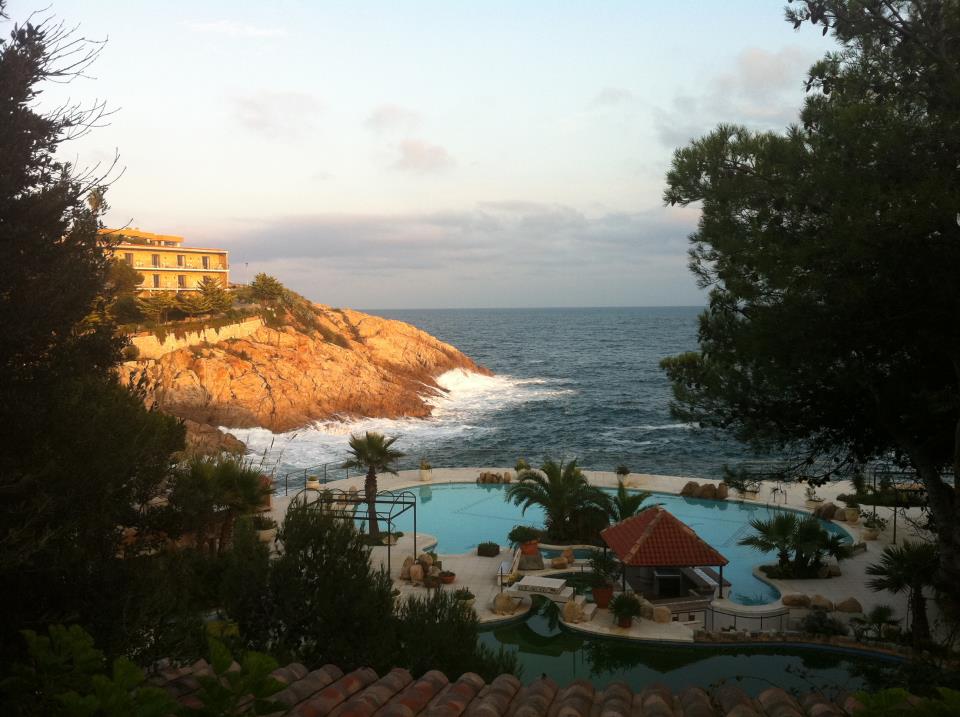