Bente Lilja Bye
This week is World Water Week. The big event takes place in Stockholm Sweden where Stockholm International Water Institute SIWI is organizing this yearly event. The World Water Week is an unique forum for the exchange of views and experiences between scientific, business, policy and civic sectors from around the globe. By harnessing and linking best practices, scientific understanding, policy insight and decision-making, the meeting aims to transcend rhetoric and provide real answers to the world’s water-related problems. This year the topic, besides the fact that it is all about water of course, is The Water Quality Challenge: Prevention, Wise Use and Abatement.

Access to clean water and proper sanitation is one of the 8 millenium goals. Better understanding of the water cycle is thus an important task for our global society, particularly in the developing countries. With increased urbanizations in areas where access to fresh water seems to be in peril makes events like World Water Week and research connected to better understanding of the water cycle an even high political and scientific priority. The overall niche for the current World Water Week period 2009-2012 is Water – Responding To Global Change.

Observing inland water from space
Earth observations from space have been used as a source of information about water for many years. We've seen satellite images of various floods on numerous occasions. The immense flood in Pakistan is particularly impressive in the many satellite images from both ESA and NASA satellites. 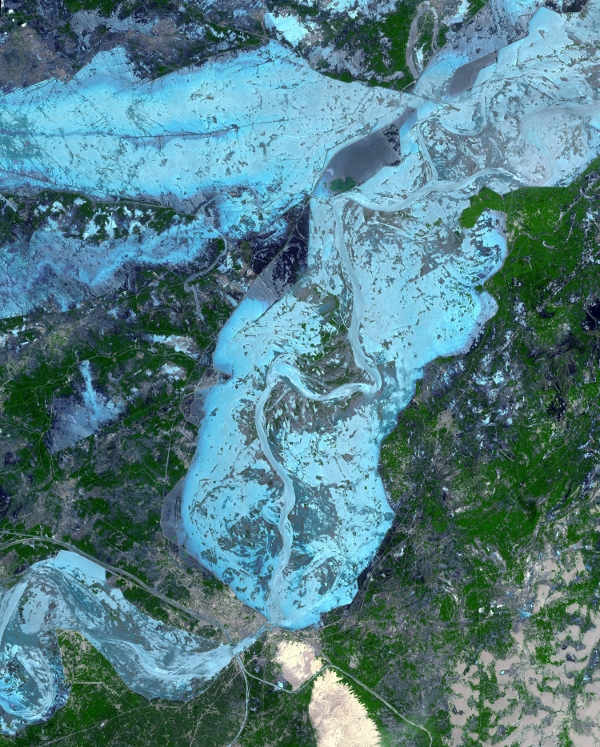 Flooding in Pakistan. The areas shown in blue are inundated regions. Credit: NASA


ESA's Envisat Advanced Synthetic Aperture Radar (ASAR). The image illustrates the difference between 24 August and a reference image of 8 September 2009. The areas shown in blue are inundated regions. Credits: ESA

New techniques
New space-based observation techniques are emerging though. ESA's Soil Moisture and Ocean Salinity - SMOS has the potential of becoming an additional space-based technique to underpin our understanding – and warning of potentially hazardous floods – by giving information about the degree of water saturation of the soil in the vicinity of rivers like Indus. If the soil is saturated with moisture at the point when rivers are flooding the uptake of water by surrounding soil will be limited.

SMOS was launched last year and activated under the International Charter on Space and Major Disasters to assist in the relief and management of the flood in Pakistan. The result was reported in Floods in Pakistan. 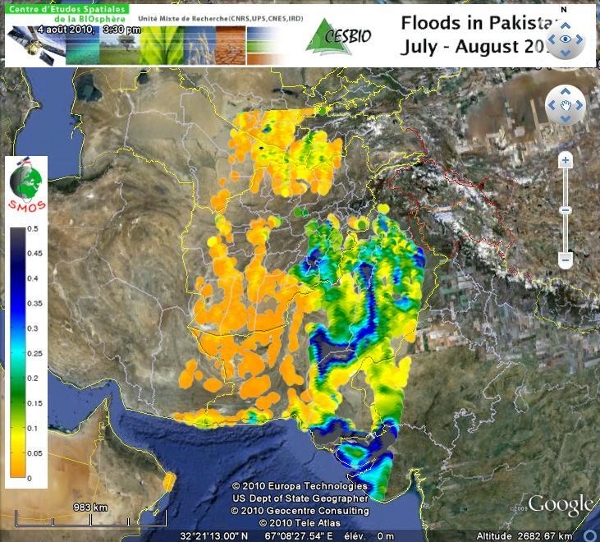 ESA's Soil Moisture and Ocean Salinity satellite sees the flood in Pakistan - and also potentially how much the surrounding soil is saturated with water. Credit: ESA - CESBIO

In May I talked to one of the pioneers in the field of satellite altimetry and SMOS expert on retrieving information about soil moisture – professor Philippa Berry. You can watch and learn here:

Too much - too little water
The problem in Pakistan right now is too much water, but the areas downstream from the Himalayas have also the opposite problem, namely too little water. This particular complex problem is discussed in a feasibility study ordered by The Norwegian Ministry of Foreign Affairs. It is a challenge for the people in the Hindu Kush-Himalayas to adapt to the increased climatic risk of severe floods and droughts. Read the report Too much - Too little Water: Adaptation to Climate Change in the Hindu Kush Himalayas and Central Asia.

With the help of another kind of satellite, GRACE, measuring variations in gravity, one is able to see that ground water is retracting from large areas in India. This was discovered last year in a study published in Nature and reported by NASA as NASA Satellites Unlock Secrets to Northern India's Vanishing Water. It turns out that human activities such as irrigating cropland does not allow the groundwater aquifers to refill with the same pace. 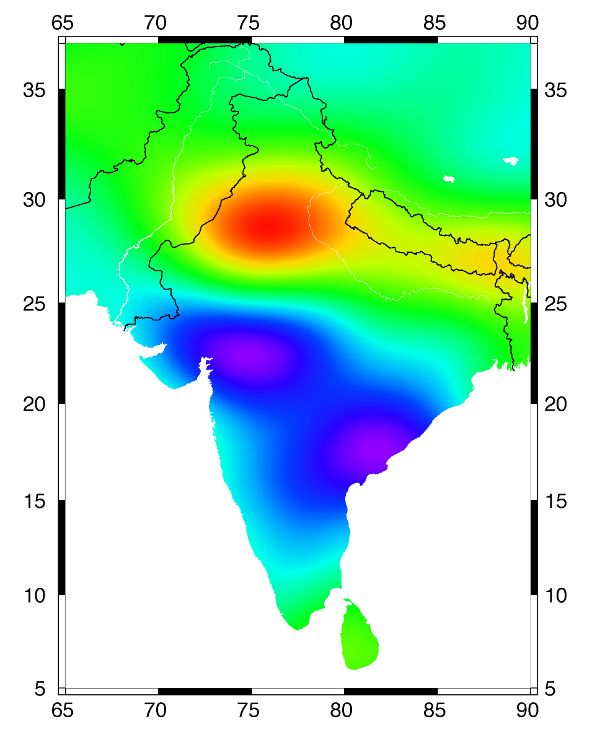 In the period 2002 - 2008 GRACE data show that Northern India is loosing a lot of its groundwater (red). Credit: NASA

We can only hope that meetings like World Water Week are able to absorb the information that space-based Earth observations, like I've given a few examples of above, is properly integrated in their programs and discussions. I am sure there are room for improvements though - and hence this little article...

Water is important.
PlanetBye
More Articles All Articles
About