Tommaso Dorigo
It is so annoyingly sweet to be right, when being right means that one's job is not going to become more exciting in the near future... Today CDF published their analysis of CP violation in the Bs sector, where a very exciting three-sigma deviation from the Standard Model predictions had been a bit prematurely and uncautiously claimed by a group of phenomenologists in 2008.

The group had analyzed the results of CDF and the results of DZERO on the phase of B_s mixing, fitting them together with other information using some assumptions on experimental details they did not have access to (if I recall correctly, DZERO had not made available their full likelihood, so the combination was on shaky ground).

To be fair, many in the CDF and DZERO collaborations were excited by the experimental results, too: the effect observed would be in line with several NP models. I mean to say I do not want to cast the blame on happy combinations of results: it just happens that three-sigma results evaporate, once one analyzes more data. And this occurs especially often when the three sigma are put together by collecting a one sigma result here, a one and a half sigma one there, etcetera.

In fact, three years and a half after the excitement, the analysis of an over three times larger dataset allows CDF to bring back the departure from SM predictions to just 1 sigma, i.e. no effect. No new physics. Nothing of the sort. To be clear, a one sigma effect is something that happens to you 32% of the time... 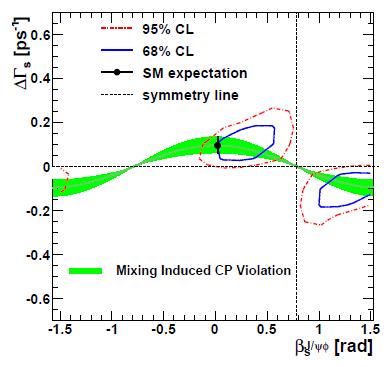 The results are contained in this long paper, which I have no time nor energy to review for you. I can only dig out of it the money plot, which shows the angle beta_s of Bs mixing as a function of the width difference Delta-Gamma_s between the neutral B_s mass eigenstates: the SM predictions are shown as a black point with error bar, the green band shows the expected dependence of the two parameters when CP violation effects are present induced by the mixing of the B_s mesons, and the blue contour shows the one-sigma region of the experimental result on the two parameters.

If you want more detail on the status in 2008, above I was referring to a discussion I made in my blog in March 2008 of the experimental status of measurements in CDF and DZERO and of the theoretical interpretations which had previously appeared in a preprint (0803.0659). Self-quoting myself from there:

I cannot help thinking that it would be really remarkable if among all the beautiful measurements that CDF is making these days, one were unable to squeeze out a 3-sigma discrepancy with standard model expectations. Sure, it is a discrepancy that fits well with some model-independent new physics scenario. But is that enough to get hyper ? Here is what the authors have to say in their conclusions:

“With the procedure we followed to combine the available data, we obtain evidence for NP at more than . [...] We are eager to see updated measurements using larger data sets from both the Tevatron experiments in order to strenghten the present evidence, waiting for the advent of LHCb for a high-precision measurement of the NP phase”.

What can I say. Good luck. I would be so damn happy if you were right… But I bet you are just being optimistic.

So my bet would be a winner, as of today. No new physics, and all is in good order in the B_s sector according to CDF.
A Quantum Diaries Survivor
More Articles All Articles
About