Eilam Gross is a professor of Physics at the Weizmann Institute of Science of Rehovot, Israel, and a distinguished member of the ATLAS collaboration. That makes him a competitor, since I work for the other experiment around the ring, CMS. But Eilam is also a colleague, especially since we are members of the Statistics Committees of our respective experiments and we cooperate in a joint group to try and converge on common practices for statistical procedures in data analysis at the LHC. Ah, and- I forgot to mention he is the convener of the ATLAS Higgs group| So I am very pleased to feature his own take on the LHC results on Higgs searches...

“The God Particle,” as the Higgs boson is often called, comes from the title of the book by Nobel laureate Leon Lederman that deals with the search for the elusive particle. This particle, according to the Standard Model of Particle Physics, is responsible for giving mass to all of the elementary particles in nature.

The mass of an electron determines the size of a hydrogen atom; ultimately the size of atoms ensures, amazingly enough, our existence. Maybe this is the reason the Higgs has been treated with almost mystical reverence in the mass media.

Three weeks ago, I attended a conference  in Paris. Nearly everyone who is involved in the search for this particle was there. I was the guest of my friend Marumi Kado. At some point after a wonderful, wine-filled dinner, Marumi suggested a glass of grappa. “You must,” he said. “It is Prime Uve, the best there is.” A few hours later, in the wee hours of the morning, Marumi nudged me awake from a deep sleep and said: “Eilam, do you want to see a Higgs?” Of course, I jumped up immediately: “What? Where?” “The computer has stopped running; here are the results,” he said. On his computer screen were images from ATLAS. We were all in shock. Something was out of the ordinary at a mass of 126 GeV (a unit of mass close to that of a proton). Definitely significant – 3.6 standard deviations. We couldn’t believe our eyes – we looked at the screen for ages before we started to digest what we were seeing. For the past three weeks, the entire Higgs search team in the ATLAS experiment have checked and rechecked the results from every possible angle. We checked for errors… for bugs in the program.

In 2011 the LHC particle accelerator in Geneva collided over 300 trillion (a million million) protons in two opposing beams. All of that enormous energy (7 trillion electron volts) went into the effort to produce the Higgs boson. In each collision, other similar particles are created and there is no way to foresee what will be found. Quantum field theory enables us to predict the chances of a certain particle being created. The calculations show that the likelihood of getting a Higgs out of a particular collision is so small that over the course of a year we can’t see the signs of more than a hundred or so (with a mass of 126 GeV). 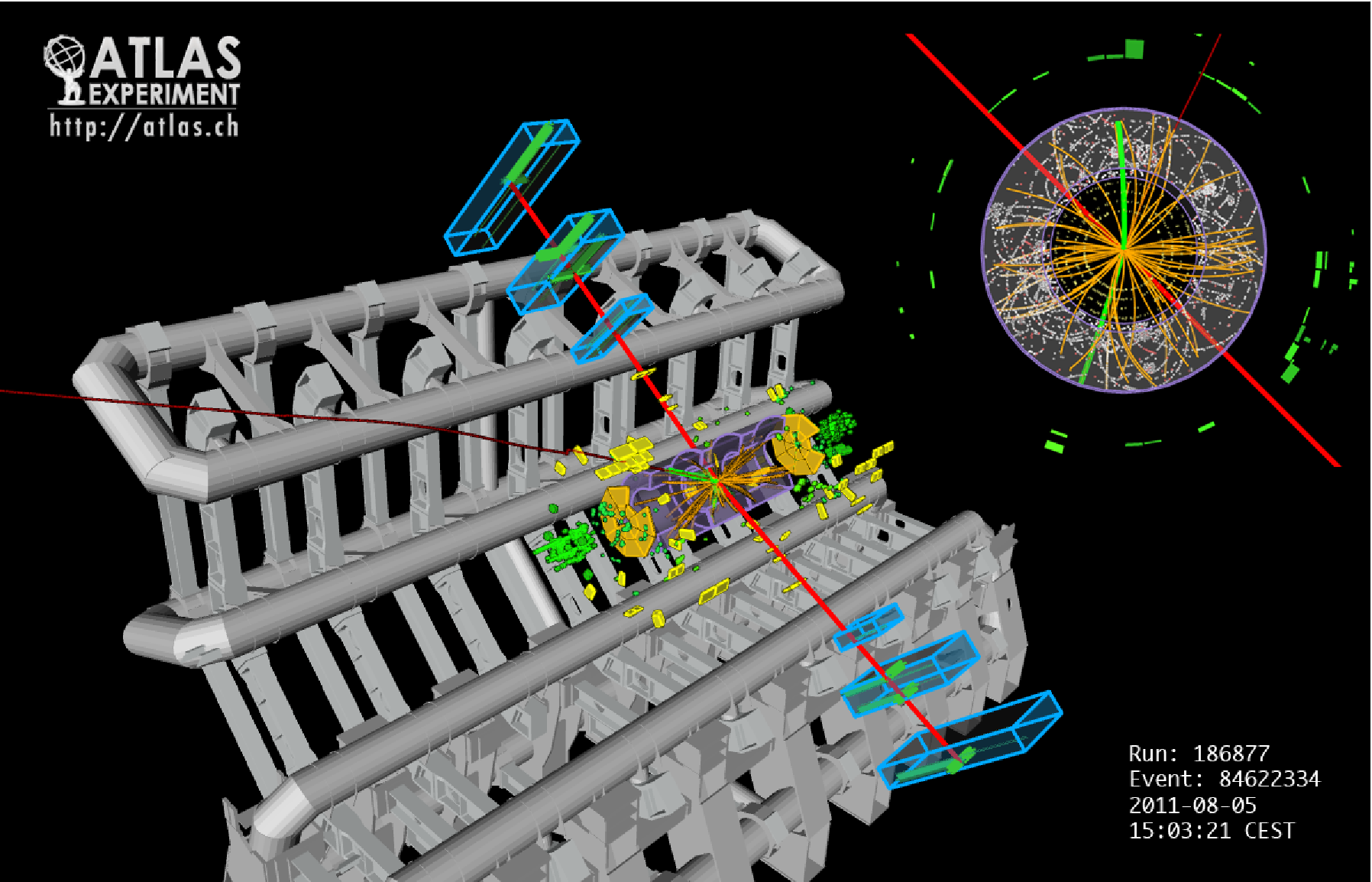 In the figure above we see the result of a collision that looks like a Higgs. But is this a Higgs particle? The problem is that we don’t know enough to conclusively identify it. It could look like hundreds or thousands of other particles produced in the collisions. How can we tell?

We don’t know for sure! What we can do is count how many of the collisions outcome look similar to a Higgs, and we can calculate how many of these we expect to see in the Standard Model without the Higgs. On the basis of observation, we can compute the probability that the number of collisions that result in particles similar to a Higgs boson will fit the Standard Model (without the Higgs). The numerical value of that probability is called p0.

If there is no Higgs, we would expect that value to bearound 0.5 (50%), i.e., the same as the chance that the flip of a coin will come up heads.

But if the Higgs exists, we should get “extra” collision results with a mass in the range that the Higgs might have. Of course, even if there is no Higgs, there could be statistical fluctuations affecting the experimental results. But the chances of such fluctuations are low (that is, they have a small p0).

In the following illustration we see the results of the measurement of the ATLAS detectors in CERN (as they were presented by ATLAS spokeswoman Fabiola Gianotti). 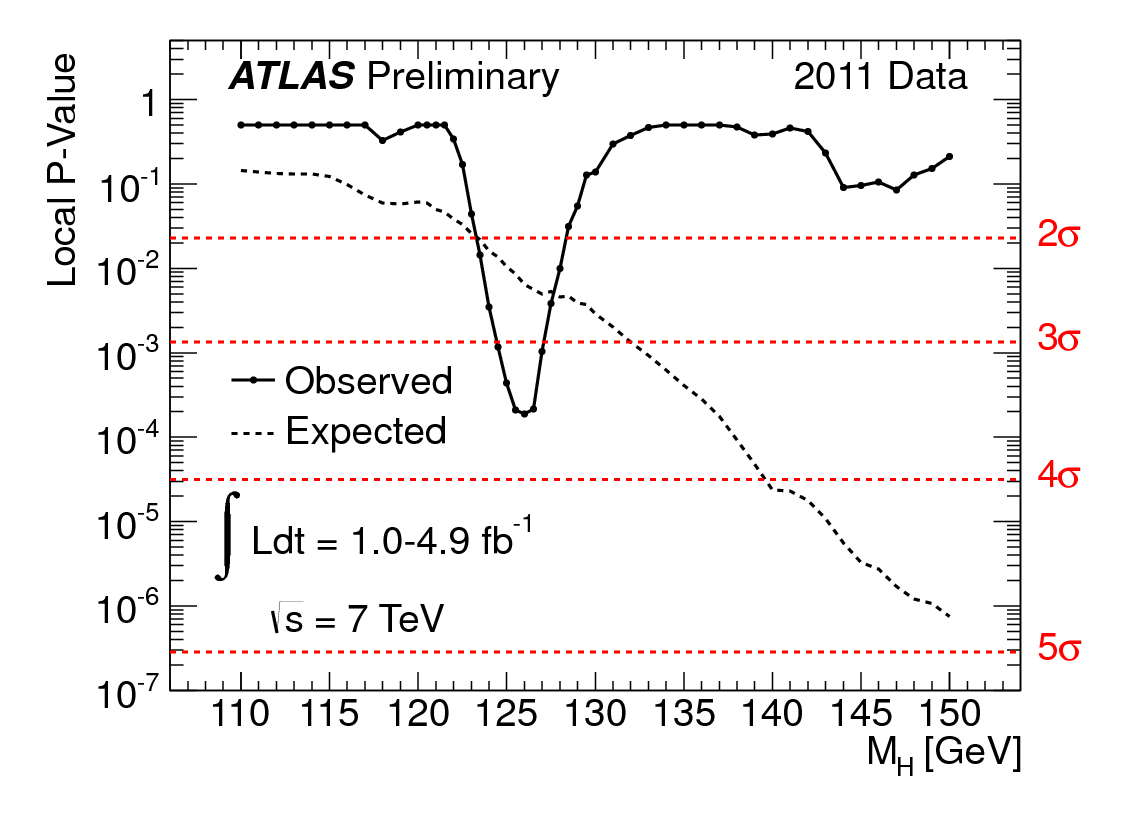 In most of the mass range (between 110 and 150 GeV) the p0 value is around 0.5, as expected if there were no Higgs. But right around 126 GeV, the p0 probability drops to 0.00019, that is, there is a chance of about 1 in 5000 that the “extra” events observed at this specific mass are the result of a statistical fluke rather than the creation of a Higgs boson.

Moreover, had we seen such a peak at a different mass it would also been considered as a possible Higgs signal. This increases the chances that the observed “extra” events are the result of a statistical fluke. (This is called the “Look Elsewhere Effect”).

Does all of this prove the existence of the Higgs boson? Everyone must judge for him or herself the significance of those two hundredths of a percent.

My opinion is – maybe. Maybe yes. Maybe no. It depends.

First, we must see what the results are from the competition– CMS. Unfortunately, CMS did not measure the statistical fluctuations. They measured two statistical anomalies that may be evidence for the Higgs: one witha mass of 119 GeV and another with a mass of 124 GeV, both with a significance of about 1%. That is, the chance of getting the CMS results without the Higgs is not that low (1 in 100).

But it is likely that if we combine the two results, we might perhaps see the first signs of a Higgs in one of two possible places: 119 GeV and around 125 GeV with a relatively high level of confidence.

Will we ever conclusively find the Higgs?

It seems that the year 2012 will reveal it to us. In April 2012, the collider will start up again, apparently at a higher energy and greater collision frequency.

We can expect that the summer of 2012 will be a summer of tidings.
A Quantum Diaries Survivor
More Articles All Articles
About