Tommaso Dorigo
Update: I am keeping out of this, but you may well be interested in reading what Gibbs, Woit, and Motl have to say about recent leaks on the ATLAS and CMS results. So I hope I won't be crucified for three general links now!

Update 2: And it is now public that a seminar at CERN will be given by ATLAS and CMS on December 13th. So the wait is almost over, officially...

I have not written in a while - a full week. This is uncharacteristic enough that I owe you some sort of explanation.

I spent the week in Geneva, where I attended a very intense and tremendously interesting CMS week. CMS weeks are periodic gatherings of the CMS members (they occur every three months). In a long plethora of parallel and plenary meetings one can learn everything about the ongoing activities, the organizational aspects, and the most recent advances in analyses and searches. It is also quite useful for somebody who spends most of his research time off-site to hang around during CMS weeks, because it is the best time to get a hold, interact, and discuss with other members who also live and work off-site.

I of course cannot tell you anything at all about what I learned. I am not even sure I want to tell you what I listened to in very broad terms, since I have grown tired of living "on the edge", when I believe I am on the right side of the rules while some collaborators think I am in fact on the wrong side, disclosing internal information or writing anything that bylaws and specific guidelines explicitly forbid me to write. The limit of what one can and cannot say is fuzzy enough that it is dangerous to get close to it, as I've got to learn the hard way.

What I am pretty sure I can tell you, however, is the following: of course CMS and ATLAS are working night and day to produce results on their Higgs boson searches. And of course I know what CMS has in its hands. I do not, however, know what ATLAS instead has gotten in their 5/fb dataset; so I only know half of the story, and half of the story is not enough to understand what the ending is. Yet, for sure we can have a look at a couple of graphs produced some time ago, to figure out where we might stand when, in very little more time, the two collaborations will release their results.

The first one above, by CMS, shows you what kind of "significance" of a Higgs boson signal CMS predicted in 2010 they could extract by combining all the relevant search channels where the particle is looked for, as a function of the Higgs mass. Here the way to read the graph is to assume a Higgs mass value -a point on the horizontal axis- and read off the median significance that the experiment expects to obtain. There are several curves, but you should only look at the full blue line, which corresponds to the actual data collected in 2011: five inverse femtobarns of 7-TeV proton-proton collisions.

What we learn is that if the Higgs boson has a mass of 119 GeV (a value I have been favouring for a while now, as even my TEDx conference testifies) CMS alone should typically obtain a significance of just about three standard deviations. Beware, this is a "local significance", that is a number that does not take into account the famous "look-elsewhere effect", the effect of looking for the particle in a wide mass spectrum, whereby a statistical fluctuation has a multiplied probability of occurring somewhere. But if you had bet on a particular mass hypothesis since last year, you could well ignore the "look-elsewhere correction" to the significance, and be happy with its local value at the mass of your choice.

And then, let us look at an ATLAS projection, again done one year ago, which describes instead the other side of the Higgs search: the job of excluding the particle's masses which are the wrong ones. In other terms, the absence of a signal at a particular mass may imply that the particle does not exist with that mass, if the sensitivity of the experiment is sufficient. 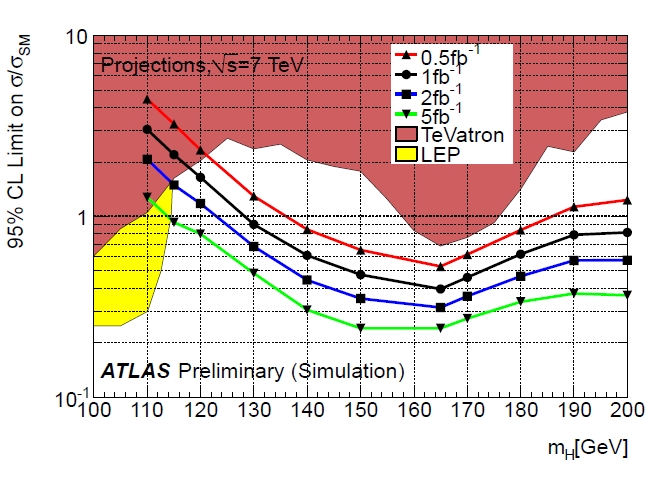 In the figure what is shown is the "95% Confidence-Level upper limit" that ATLAS expects to set on the particle's production rate, as a function of the particle's hypothetical mass. Here we pick a place in the horizontal line and we can read off, for the corresponding Higgs mass, what is the upper limit that a search can set on the production rate of the particle (in units of the predicted rate, such that 1.0 is the SM prediction), if the particle does NOT have that mass. Only look at the green curve (the one below all others) since it is the one corresponding to the data in ATLAS hands right now.

If the figure confuses you, focus on one simple thing. What matters is if the green curve is below the horizontal line at 1.0: since the production rate is computed in units equivalent to the predicted Standard Model rate, a upper limit below 1.0 means that the particle does not exist at that mass value. The figure is a projection of data still to come, but it shows what kind of situation we might be in once the ATLAS results are released.

I should also explain that the purple and yellow zones are the excluded production rates by the Tevatron and LEP II experiments (the Tevatron ones have since improved, but they are not qualitatively much different). What is important but missing in the plot is instead the LHC limit, which now excludes all masses above 135 GeV or so.

And then let me clarify something in addition, before I forget: a upper limit at 95% confidence level is not enough to assert that the particle does not exist: the particle is then only "disfavoured", because only once in twenty cases would the experiment find that result if the particle did have that mass and existed and behaved as the Standard Model predicts. It is, so to speak, an "indication" of the likely and unlikely places where the Higgs may be hiding.

Now, from Summer conferences and following combination of results by ATLAS and CMS we know that the Higgs boson probably has a mass between 115 and 135 GeV, if it exists. Now, the graph shows that ATLAS has a chance to exclude the particle in that full remaining interval, if it indeed does not exist. In other words, we might be able to have a first indication that the Higgs mechanism and the whole model is wrong, if that is the case. But beware, it would only be an indication!

There is reason for concern that such a result would be mishandled by the press. For we would be saying "There is a one in twenty or less chance to get data smelling as little of Higgs bosons as the data we actually got, if the Higgs does exist". And the press would say: "The CERN experiments prove that there is no Higgs boson!", with all the consequent easy-to-guess comments about failures, moneys spent in vain, etcetera.

No: in order to really prove that our understanding of electroweak symmetry breaking is flawed and that there is no Higgs boson we would need a much, much more solid evidence than a mere "95% exclusion". I would not be satisfied with anything less than a 99.9% exclusion (over three sigma) across the full mass range.

But I do not honestly believe that we will ever get into such a situation. I do believe, in fact, that the particle is there, and that it will be found very soon! So stay tuned and place your bets if you haven't already. Time is running short.
A Quantum Diaries Survivor
More Articles All Articles
About