- Philip Gibbs does a great job, as always, at combining -albeit approximately- the results of different experiments in the Higgs search. He now has even a full combination of LEP II + Tevatron + CMS + ATLAS, where the signal strength, in SM units, fits absolutely bang on for a Higgs mass of about 125 GeV. Please see his article at the link above; but I cannot resist from stealing his most intriguing picture (sorry Phil!):

If Phil did his homework correctly, the combination fits well the signal hypothesis and is over three sigma away from the no-Higgs hypothesis at that mass.... This reinforces my belief that what we saw today does constitute "firm evidence". My opinion, sure.

- Information on the Higgs analyses is now publically accessible at this link.

- Also, on an afterthought I decided I will not update the plots in this article -they are nice in that they reflect the "draft" nature of this piece as I wrote it in real time. I will pick better pictures for the next posts commenting the result, of course.

- Finally, Matt Strassler in his article about the Higgs today stresses that I am badly wrong on calling this a "firm evidence". Oh well - that's my opinion, and I believe I am entitled to it. He has a point (in a later comment in the thread) when he says that my prior beliefs are somewhat intermingled with my conclusions, but I think that is sincerely unavoidable if you ask people for their real opinion on something, rather than a dull scientific "uninformative" answer. 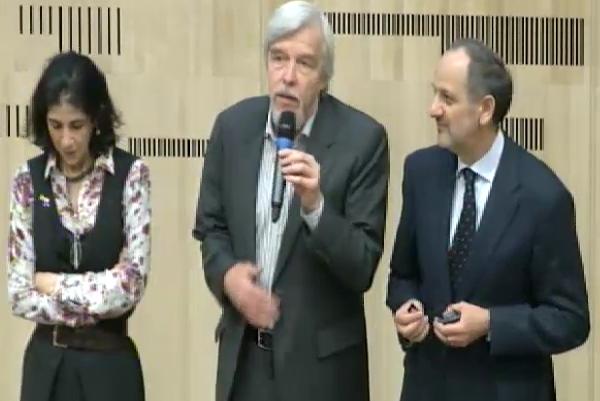 (above, Heuer with Gianotti and Tonelli during the presentation)

The news is all in the title of this post. I know some of my colleagues will disagree, and the message is by no means the one that officially CERN wants to deliver nor publicized by the press. But "Firm Evidence" is what I personally would call the now public results of the ATLAS and CMS experiments in their multi-pronged searches of a Standard Model Higgs boson.

I will explain why below, using some of the most important graphs shown by Fabiola Gianotti and Guido Tonelli today; but before I continue, let me tell you why I have stressed "Standard Model" above. A particle which behaves like the Standard Model Higgs, both in the way it is produced and in the way it decays, cannot in my opinion be considered a hint of Supersymmetry just because some of the SUSY theories do predict that the lightest of the 5 or more Higgs particles will behave like a Standard Model Higgs boson!

So, SUSY enthusiasts should remain quiet for the time being, especially since large swaths of parameter space are being directly canceled by the CMS and ATLAS searches -for instance, a 500 GeV gluino is by now almost totally excluded (it remains possible in very specialized and ad-hoc scenarios) and Gordy Kane no later than one year ago was willing to put his money on it.

But let's not divagate. The Higgs. The Higgs (SM) was predicted to be light from the observation of many observable quantities connected to it - dozens of them, to be sure. Most of the precise results of the LEP experiments allowed to fit for the Higgs mass, once supplemented with information on the W and top quark masses. And the answer was unequivocal: the Higgs must be light, most probably below 161 GeV or so (the LEP electroweak working group indicates this in their web page, although it is probably not updated with the most recent information).

So let me now answer the question I posed at the beginning to myself: why do I believe this is firm evidence of the existence of a SM Higgs at 124-126 GeV.

First of all, we expected it to be around there, given the indirect information from electroweak fits.

Second, three-point-six standard deviations above background expectations from one experiment would not be enough if the other one did not have a confirming evidence, albeit weaker, in the same place of the wide mass search region. But the two experiments are providing a very coherent picture.

Third, the evidence is coming from different search channels, and they all appear to be coherent with the Standard Model expected cross section.

Fourth, I do not believe we need to worry anymore too much about the look-elsewhere effect (aka trials factor), which is a derating of the local significance due to the many places you look. If (big if, but follow the argument) the Higgs boson exists, it is virtually certain to be where ATLAS and CMS have first found an indication. On the other hand, if you believed the Higgs did not exist, you would have to reckon with the fact that two experiments exclude it in a wide mass range, where a fluctuation might produce a signal with a cross section much different from SM predictions, while they find a significant excess with about the right production rate in the same place. In other words, no other place in the mass spectrum yields excesses which are compatible with the SM prediction, and we can revert the look-elsewhere effect argument: how likely is it that both experiments find an excess just at the same location in this wide range ?

So let us examine the two "money plots" of ATLAS and CMS, which combine information from many different channels. ATLAS only updates results in the most sensitive channels, namely the diphoton, di-Z-boson, and di-W-boson final states (but the latter only with half the total statistics), using "solid" cut-based analyses. CMS instead did a better homework, and can boast results with the full statistics with all the available search channels, which include also b-quark pairs, tau lepton pairs, and uses also multivariate techniques in some cases. 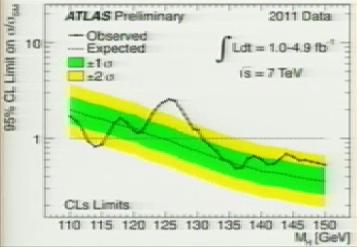 The one above is from ATLAS. The one below is from CMS: 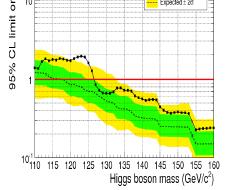 In these figures the y axis has the Higgs boson cross section, in Standard Model rate units. What is plot is the 95% confidence level limit obtained by the two experiments upon combining their search results in all the considered channels. The black curve shows the obtained limit, the band shows the 1- and 2-sigma range of expected limits. The fact that both experiments have upper limits departing from the expectation, for masses around 125 GeV (a bit below that for CMS, a bit above for ATLAS), is the result of both having excesses of events there.

Next let us look at the p-value plots. These are tightly connected with the figures above, but give a different picture: they describe what is the agreement of backgrounds and data more directly. There are also expected p-values which would be obtained if the Higgs boson did exist: the compatibility of the observed p-values with the latter curve indicate that the fluctuated data are in agreement with expectations for the signal. 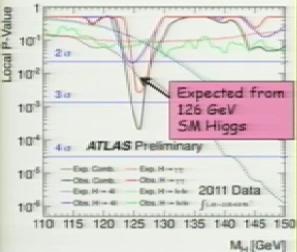 Above, the ATLAS result. The expected p-value above is the dashed black curve extending toward low values at high mass. (I apologize for the poor quality of this picture, I will add a better one once it becomes available).
And below see the CMS one:

CMS has compatibility with SM expectations for the p-value in a wider mass region than ATLAS: both a 119 GeV Higgs and a 124 GeV one would be roughly in agreement with observations. 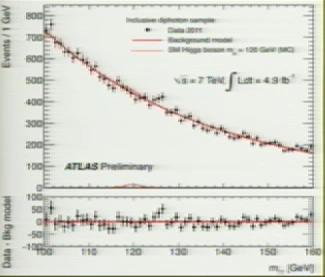 The significance in ATLAS is driven by two signals: three ZZ candidates, and a inspiring bump in their gamma-gamma distribution (which is however more pronounced than what should be expected by the SM signal). See the mass distribution on the left: the small three-bin bump at 126 GeV is the source of the significance that ATLAS quotes at that mass. The signal is more prominent when examined in the lower band, which is a background-subtracted distribution. 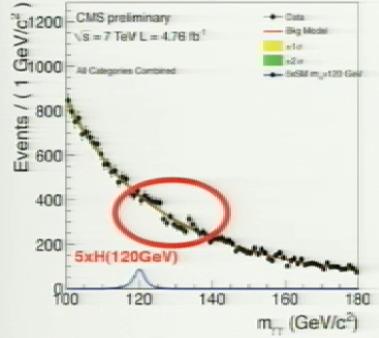 On the right I also attach the CMS gamma-gamma mass distribution. The signal is smaller than the one seen by ATLAS, but there is some sort of compatibility between the two.


Now some additional random notes I took from the seminars. First of all, from ATLAS:


And now from CMS: 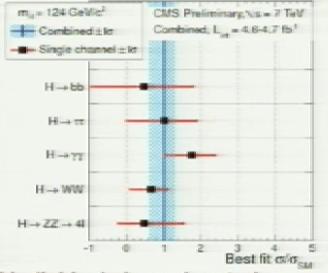 And I conclude with a very nice Higgs to gamma gamma candidate by CMS: 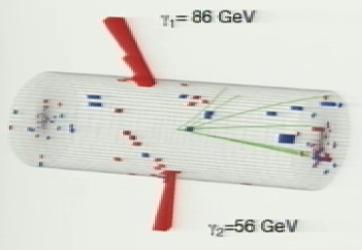