Tommaso Dorigo
The Draconids (also called Giacobinids) are a meteor shower associated to comet Giacobini-Zinner (see below for a 100-year-old picture of the comet). While most years this shower passes unnoticed to all but few professionals and experts amateurs, yielding only very few meteors in the nights between October 6th and 10th, every once in a while the Draconids do put up a real show, producing hundreds, or even thousands of meteor streaks per hour in clear skies.

This year is the right one: the Earth will pass through filaments of debris that the comet left in its passages of 1887-1926. According to international expert Peter Jenniskens (who wrote a "bible" on meteor showers a few years ago -I reviewed it here),

Recent outbursts are insignificant compared to what can happen when Earth passes through the densest parts of a trail. The best return in future years will be the anticipated storm of October 8th, 2011. (Meteor Showers and their Parent Comets, Cambridge Univ. Press 2006, p.334)

Despite being less famous than other streams, Draconids produced in the past some of the best-remembered storms, with Zenith Hourly Rates of about 10,000 both in 1933 and 1946. A witness, Alasdair Mac Ranouill, recalls the 1946 encounter:

I remember driving at night during this meteor storm -it was literally like a snow storm, with so many flakes coming at me; so many lights, many more than were possible to count. Sometimes I wonder why the Leonids get more attention in the news than the Draconids ?

By the way: the Zenith Hourly Rate is the number of meteors that an observer could see in a clear sky if the radiant point of the shower were located at the zenith. Observable rates are always smaller, due to the radiant being lower (with an effective rate decreasing with the cosine of the angle between radiant and zenith), and to less-than-perfect sky conditions (clear sky, no moon, no light pollution, limiting magnitude of +6.5).

Jenniskens notes that the 1946 storm occurred with a full moon in the sky; yet the slow speed of the meteors with respect to the Earth must have made many of them slow enough that they were still visible when other ones appeared. 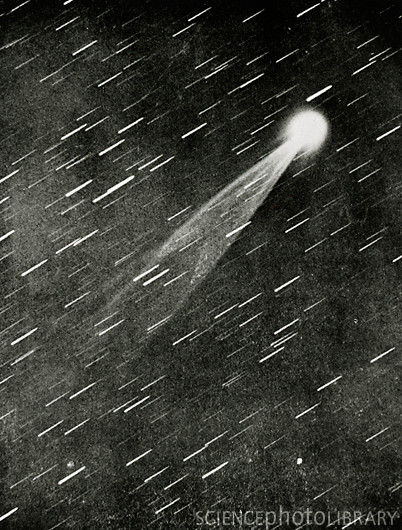 So what to expect this year ? Predictions differ. Most of them tell of rates in the ZHR=600-1000 range, but a few differ (for instance Michael Maslov and Aldo Vitagliano), predicting that the Earth will miss the bulk of the dust, passing only close to its periphery, and yielding smaller counts.

The predicted encounters with the most dense regions will occur at 19.09 and 21.57 Italian time - that is two hours past the Universal Time (17:09, 19:57). Observers in the United States will have to catch a flight to see the storms, while ones in Eastern Europe and the middle East are ideally located to observe an evening shower.

So please, if you have a chance, peek out of your window at about the specified times. Better still, go to a dark location and lay down staring at the sky. But don't overdo it: the almost full moon will anyway prevent you from observing most of the meteor streaks, so light pollution will not be a limiting factor. If the ZHR is really 1000, you should expect to observe a rate of about a meteor every ten seconds or so at the peak. But who knows, maybe higher rates could occur!
A Quantum Diaries Survivor
More Articles All Articles
About