Tommaso Dorigo
Do you remember the multi-muon anomaly in CDF ? The matter was discussed with quite some detail in a series of posts in this blog (back then at wordpress). In a nutshell, CDF could not explain their sample of events containing two muons, when these particles had a very large impact parameter (the impact parameter is the minimum distance of a trajectory from the interaction point: a large value indicates that the particle was produced elsewhere). Further, in these events one found a disproportionally large number of additional muons, which known Standard Model sources could not explain.

After the publication of the CDF study theoretical interpretations flourished, and the debate raged for a while. A possible source of multiple muons with large impact parameter would be the production of "hidden valley" particles, according to a theoretical idea with a few notable followers. The potential of the result being a unexpected signal of new physics begged for experimental confirmations.

The competing experiment at the Tevatron, DZERO, tried shortly thereafter to perform the same analysis done by CDF, but produced a rather inconclusive result: while it appeared to not find any unaccounted source of large-impact-parameter muons, thus disproving the CDF anomaly, DZERO did not see either any contamination to that sample caused by long-lived kaon and pion decays in flight which are known to exist, thus disproving their own result; the reconstruction of charged particles with large impact parameter by the software algorithm was blamed to be inefficient, making DZERO insensitive to the anomalous CDF signature. I am not aware of any improvement of that effort.

As for LHC experiments, I cannot say whether CMS sees or not any anomalous tail in muon impact parameters, or excess of large muon multiplicities; however, since we have been studying those spectra for a while and produced measurements of b-quark cross sections with dimuon samples fitting the impact parameter distributions, you can draw your own conclusions. A definitive study, in any case, still waits to be performed; so the matter has pretty much remained "on hold" since the fall of 2008, when the "muon anomaly" paper by CDF first appeared.

Now the same CDF researchers who studied the matter since the start of Run II, a group led by Paolo Giromini, has produced a much "simpler" analysis than the extremely complicated one of 1998, basing it on a larger data sample. It is a welcome change from the rather impenetrable cuisine on which the 2008 result had been based (suffices to say that even after multiple readings of the CDF publication, eminent theoreticians got the resulting "new physics" cross sections implied by the data wrong by a factor of three). 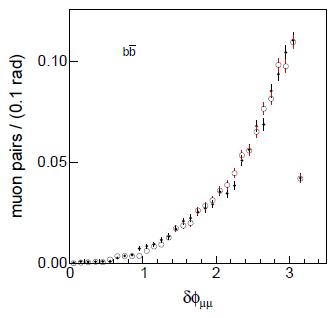 So what does the new paper study? It concentrates on the observed azimuthal angle between the two "trigger muons" - the duo firing the collection of the event by the online trigger system of the CDF detector. The angle is studied in the whole data sample (almost 4 inverse femtobarns of Run II data) and is compared with simulations of QCD bb (see right) and cc production events, finding good agreement. Studies of muon pairs from resonances also produce a similar distribution to the QCD heavy flavor ones: a distribution peaking at 3.14 (back-to-back muons), with a long tail down to smaller angles. The paper also deals with typical sources of fake muons, showing that the distribution of the azimuthal angle for events with a fake muon also has a similar shape.

However, when additional muons are searched in the events, the resulting subset shows a striking change in the azimuthal angle between the leading muons: this distribution now peaks much more sharply at 3.14 (see figure above: on the left events with three muons, on the right events with four muons); in other words, the long tail toward smaller angles, characteristic of QCD radiation processes "misaligning" the two muons, is gone. These events appear to have a quite different kinematics, unexplained by known sources.

The paper does not attempt to attach a significance or similar measures of agreement with known backgrounds. Indeed, there is not much to compute: if the azimuthal angle of true muons in multi-muon events is so strikingly different from the one of the original sample of dimuons, any statistical test will just confirm what your eye says.  A conclusion might be that there has to be a new physics process contributing there, one which is preferentially selected by the request of additional muons.

Yes, maybe. However, I remain convinced that the two trigger muons, or at least the additional ones, in these events are fake ones caused by punch-through of light hadrons, which manage to pass through the thick calorimeter and steel, and get detected as muons in the outer drift chambers which CDF uses to identify muon candidates. The explanation I can offer for the reason of the back-to-backness of this subset is that by requiring many muons, you are preferentially selecting events with two high-energy back-to-back jets, which contain a larger number of punch-through tracks.

I must say I know well that this obvious explanation has been studied to death by the Giromini group, and it looks quite arrogant on my part to put it forth here. But I just find it too much to buy that this new physics only appears in this very special dataset, with low-pt muons which are known since 1985 to be problematic in CDF. But of course, I would be very, very happy to be wrong on this!
A Quantum Diaries Survivor
More Articles All Articles
About