If an extraterrestrial race - or indeed later civilization on the Earth looks at the relics of our space explorations - one thing they might notice is our fondness for placing flags and pennants in space. All the space faring nations have signed the Outer Space Treaty. So these are not claims of territory (forbidden by the treaty) but rather, celebrations of national pride and accomplishment.

This photograph shows the deployed Apollo EASEP package - with the Stars and Stripes. What you might not know is that Buzz Aldrin also placed a graffiti Union Jack on the Moon (without realizing it) when he discarded the cover of this instrument package. As the engineer Keith Wright admitted in a talk to the British Interplanetary Society.

Buzz Aldrin after he deployed the Early Apollo Surface Experiments Package (EASEP) with a seismometer in its base - with the stars and stripes in the background.

Somewhere on the Moon close by is the discarded cover of ESAP which Keith Wright says has a graffiti Union Jack on it.

And actually, the very first "flag" on the Moon was Swiss - but it didn't depict the Swiss flag. Was just a plain white sheet, used to analyse the composition of the solar wind. But this was the first flag like object deployed on the Moon, before the Stars and Stripes, later returned to Earth. It was deployed first, before the US flag, to maximize exposure to the solar wind. First "flag" on the Moon - a plain white sheet, later returned to Earth to study composition of the solar wind. Swiss made. Though no Swiss flag on it.

The Soviet Union sent many pennants to the Moon and symbols including Luna 2's sphere of pentagonal shields - designed to explode on impact and send the shields flying in all directions. This was the first object to land on the Moon during the space race. But it was a hard impact so much of it probably vaporised. 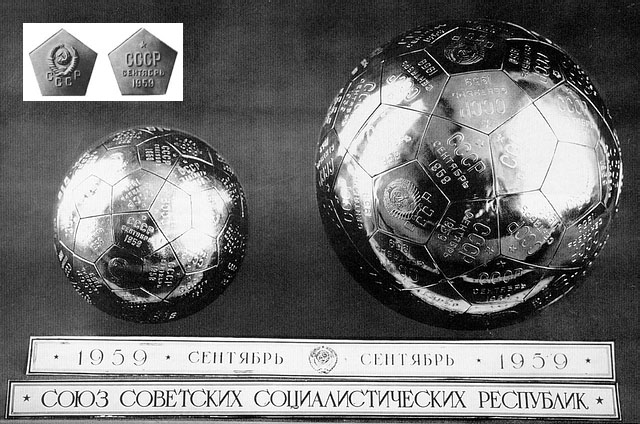 Shields of Luna 2 were like this - designed to explode, sent the shields in all directions, though they may have been vaporized by the heat of impact

Before that, Luna 1 carried a similar sphere, but missed the Moon and remains in orbit between Earth and Mars. So this sphere is still intact, and orbits out there in the solar system. 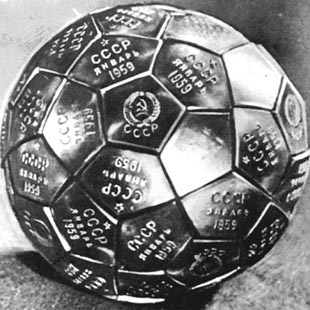 Luna 24 was the last of the Russian landers in 1976, which returned a sample to Earth, later found to contain 0.1% of water by weight. Last soft lander on the Moon until the Chinese lander. It has various pennants and includes a Russian flag 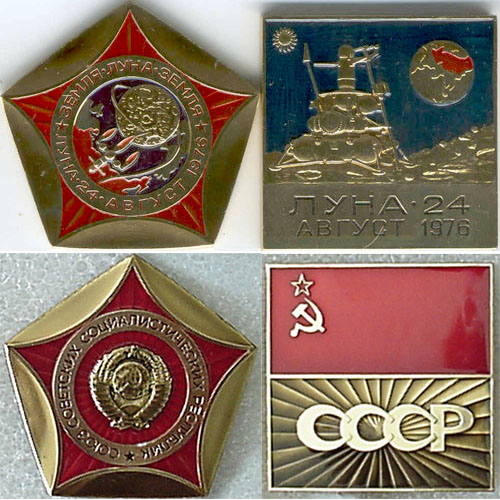 Luna 24 emblems include a Russian flag, last Russian mission to the lunar surface.

For more about this see Soviet Spacecraft Pennants

The Smart-1 lander from the European Union also crash landed on the Moon, does it have a flag anyone know? I tried to find an image but haven't found anything yet.

Since it was crashed in order to create a vapour cloud I would expect it has mostly vaporized.

Japan also has sent a spacecraft to impact on the Moon.

This shows the Japanese Hiten - and on the top, the tiny polygonal Hagoromo which was placed into lunar orbit. Communications were lost - and after orbiting for a while it impacted the Moon.

I've tried to find out if Hagoromo had the Japanese flag on it. Again does anyone know if it did?

In future, we'll surely see many more flags on the moon by various nations. Also many more "firsts", robotic or human carried.

This is a 2010 Japanese idea for a robot to draw the Japanese flag in the lunar soil, original plan was to send it there by 2015.

What would it take to put a walking robot on the moon?

This would be a major challenge as robots fall over easily.

And this is an idea for a robot that may draw drawings on the lunar soil launched in 2017, which would be visible also from orbit around the Moon - one of the contenders for the Lunar X prize. Part of the Moon Arts Ark project. It will include many drawings engraved on a sapphire disk, and one of these may be drawn on the surface of the Moon using its tracks. Members of the public were asked to submit drawings which had to be traced in one go without lifting the pen (so that they could be drawn as tracks on the Moon).

This episode of the "Clangers" gently pokes fun at our human "Flags and footsteps" approach. Have a watch from about six minutes into the video, to find out what the Clangers make of the flag left by the astronauts.

I see this as like the flags carried in the Olympic games. It's important for national pride that e.g. Usain Bolt carries the Jamaican flag. But you also have the Olympics flag for an event where all the nations come together in friendly competition. 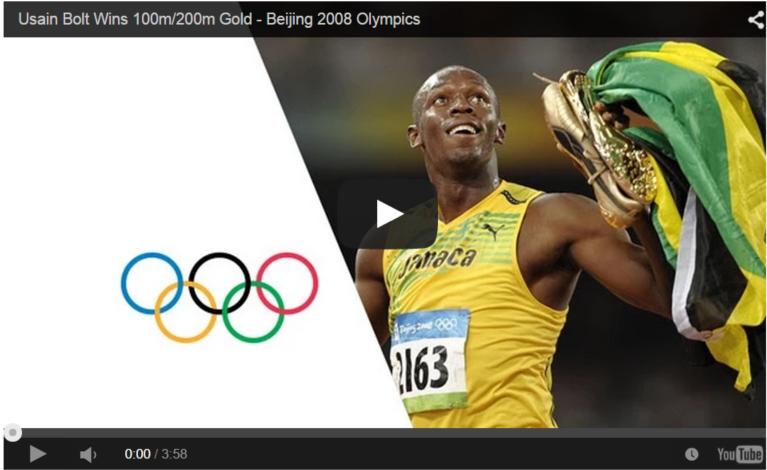 The Olympic flag was created for the Olympics Jubilee Congress in 1914, so it turned a hundred last year.


See 100 years of the Olympic flag.
This is also a bit like taking flags to the top of Everest. Tenzing holding flags on the summit of Everest in 1953. There are no photos of Hilary on the summit, just Tenzing, as Hilary took the photographs. His ice axe carries three flags - the Union Jack, the United Nations Flag, and the Nepalese flag.

When you do this, you aren't claiming Everest for your country. You just do it as a way of celebrating your achievement of getting there. 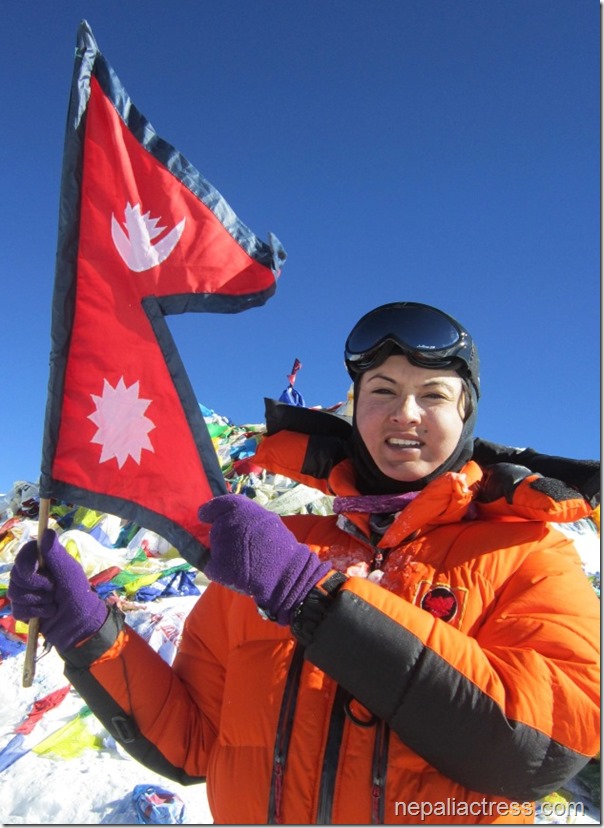 Nisha Adhikari (Nepali Actress) holding the Nepal flag on the summit of Everest. The Nepal flag is the only national flag with this unusual shape, not square, or rectangular.

Sewed together flags of Palestine and Israel on Everest - held up by an Israeli climber who promised to do this for a Palestinian climber who collapsed on the way to the summit and had to go back down.

There have been many suggested "flags of the Earth". I rather like this recent one, as it resembles the Olympics flag with its symbolism of linked rings. 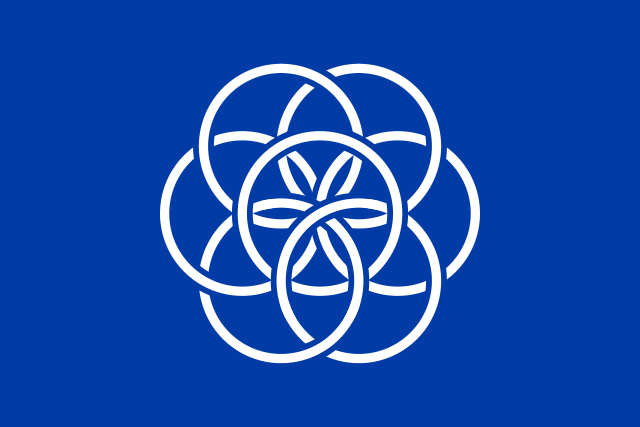 Here is his artist's impression of a human astronaut holding the flag on Mars: Before a mission like that could be approved, a COSPAR workshop would need to show that it is consistent with planetary protection requirements, and would not risk introducing Earth life to Mars surface habitats. Or else there would need to be international agreement that Mars no longer needs to be protected from Earth microbes. To my mind, seems unlikely that either could happen before the 2020s or 2030s.

But we could send humans to explore Mars from orbit. And they could plant flags on its two moons, Phobos and Deimos probably without any planetary protection issues. Also of course send more flags on robotic missions. See To Explore Mars with Likes of Occulus Rift and Virtuix Omni. 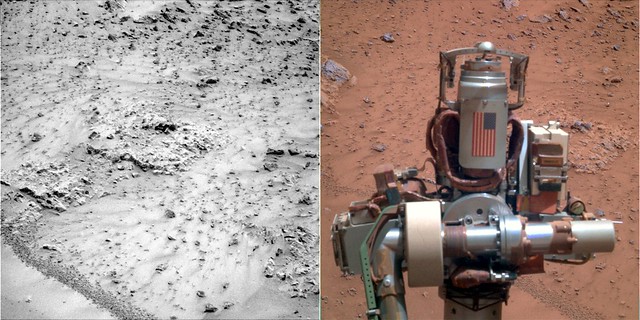 If it was thought important would be technically fairly easy to add a flag on a pole to one of our landers on Mars as well :).

For that matter, as a Buddhist, I'd suggest we take prayer flags on interplanetary missions :). Just as the summit of Everest is festooned with prayer flags, as is base camp

The idea is that as the flags disintegrate, they spread blessings of love and compassion and wisdom throughout the world. So, a disintegrating fading prayer flag on the Moon, Mars, Deimos or Phobos, could be thought the same way, as spreading blessings to the planet or the solar system, for peaceful exploration etc.

It's just a symbolic thing, but so also are flags taken for reasons of national pride.

Perhaps the world flag could be understood in this way? I don't think anyone has taken a world flag on any space mission yet. It might be a nice gesture if someone does, e.g. it might be suitable for one of the partly international crowdfunded projects such as LightSail or Lunar Mission One.

Do any of you know of any missions that plan to send a World Flag into space? Or of any other flags on the Moon. Or interesting flags elsewhere in space? Do say in the comments.