This may be a welcome change from the climate change discussion which got a bit heated over the weekend. The Talanoa climate change story telling dialogs. They have been going on all day, in seven simultaneous sessions, today, 11th December 2018. The stories have been archived and you can rewatch them via Skype

Talanoa is a traditional word used in Fiji and across the Pacific to reflect a process of inclusive, participatory and transparent dialogue. The purpose of Talanoa is to share stories, build empathy and to make wise decisions for the collective good. The process of Talanoa involves the sharing of ideas, skills and experience through storytelling.

During the process, participants build trust and advance knowledge through empathy and understanding. Blaming others and making critical observations are inconsistent with building mutual trust and respect, and therefore inconsistent with the Talanoa concept. Talanoa fosters stability and inclusiveness in dialogue by creating a safe space that embraces mutual respect for a platform for decision making for a greater good.

They speak in their native languages, probably with multilingual translation through headphones but you only hear the raw audio, not the translations. Luckily many speak in English. You can watch them on Skype here

You can see the list of participants for each room and the order in which they speak here.

Just been dipping into some of these - they are all recorded for re-watching. I haven't watched them all by any means, indeed there haven't been enough hours in the day to do so given that there were seven sessions happening simultaneously, each for several hours.

However I happened on an especially interesting one from the ambassador for the environment for the republic of Suriname - smallest country in South America, and one of the few CARBON NEGATIVE countries absorbing 8.8 million tons of CO2 every year. That's 16 tons of CO2 per year per person. 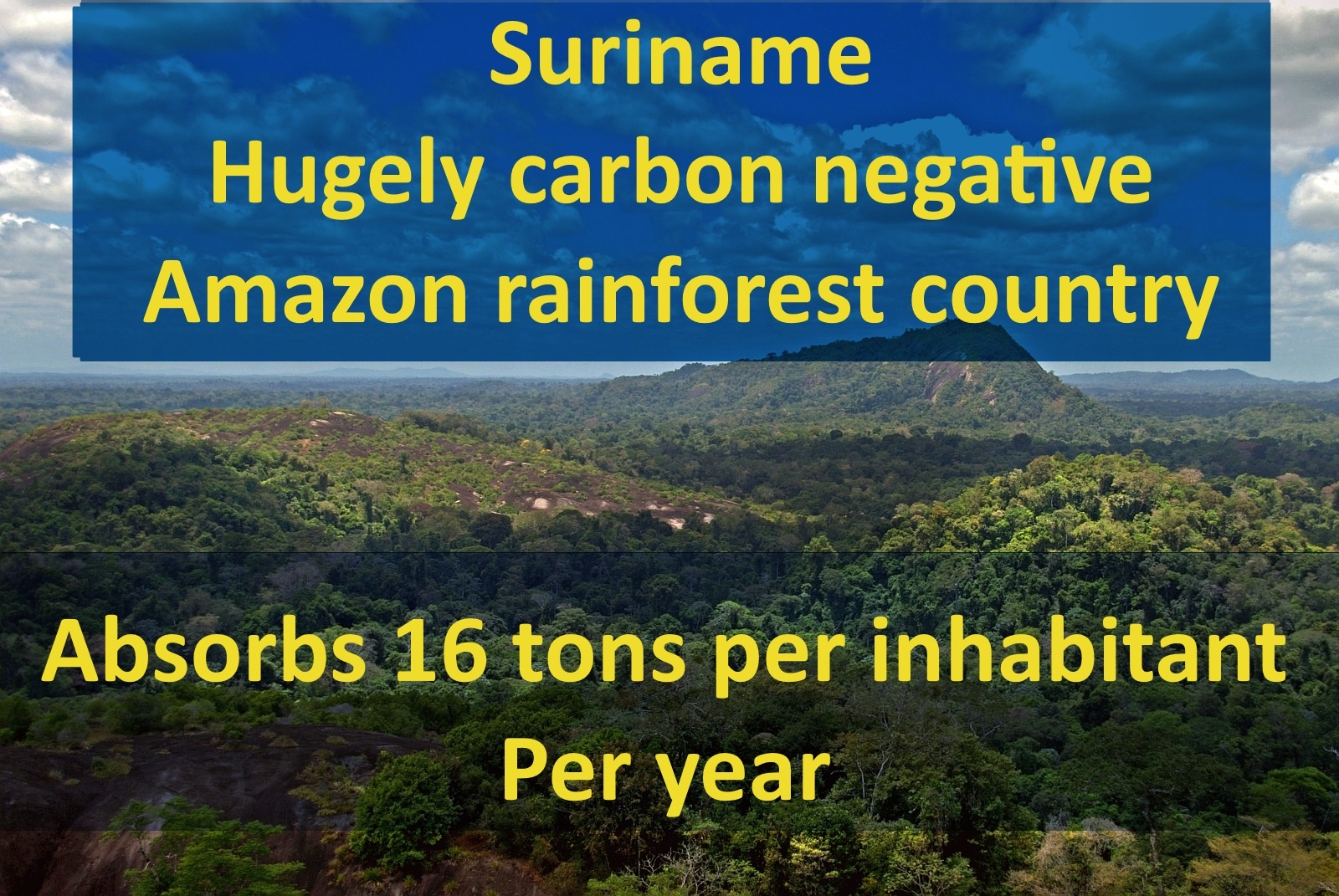 Photograph from the summit of Mt. Volzburg in Suriname by David Evers

The global average is to emit five tons per person per year. So the population of 541,638 is not only carbon neutral. By those global averages, their country is offsetting the CO2 for 1.7 million additional people every year. Already. Has been since before anyone was talking abbot climate change.

It starts 3 hours and 14 minutes into WROCLAW Talanoa Dialogue 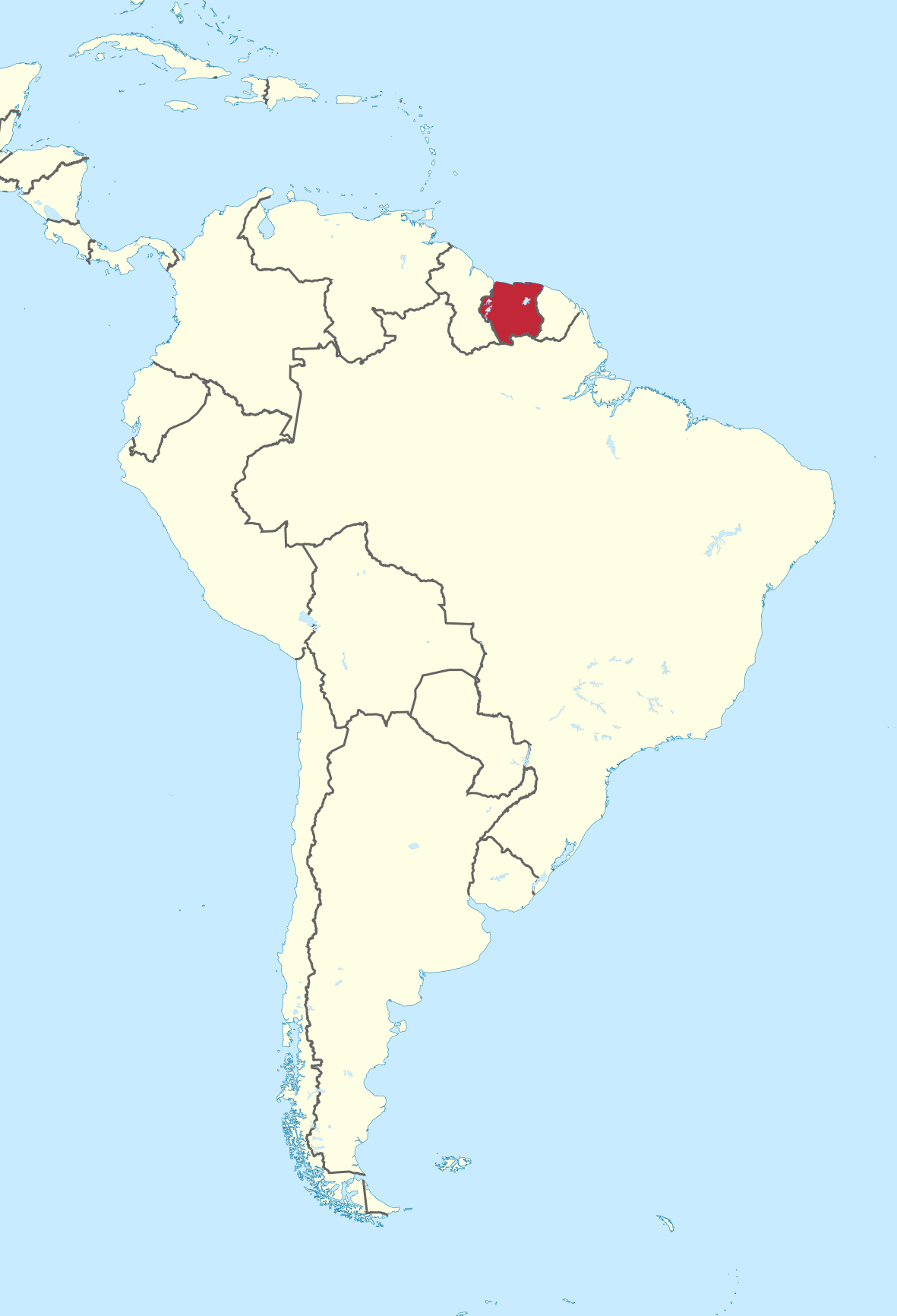 I'd heard of Bhutan as being the only carbon negative country. Apparently not. Suriname is as well. With 165,000 square kilometers, it's an average of three people per square kilometers. Most of their electricity generation is from hydroelectric.

It's 93% original Amazon rainforest, and most of the population live near the coast. Then, 80% of their population and 40% of their GDP is in danger of flooding due to climate change not caused by them. They need technical support and financial help with climate mitigation, for education, and to prevent the sea from flooding their country. Their INDC is mainly to maintain their 93% forest cover so that it continues to act as a carbon sink for the world, prevent illegal deforestation, encourage their sustainable logging, keeping the forest cover, to replace the small percentage of diesel generated power e.g. for remote villages by micro-renewables, and dikes and river defenses, e.g. to protect their mangrove forests and also their rivers.

Total cost just short of $3.5 billion. It is a lot for 500,000 people to find, $7,000 each. They have unconditional contributions too but to preserve their forest and their coastal mangroves and rivers as well as transition to renewables, that's the cost. It's the paradox of a small number of people living in a country that is of disproportionately high benefit to climate change. They are not a poor country, so don't get the support of the poorest countries, but they are not wealthy either but fall between the two and find there isn't much support for them.

It explains their dilemma:

Amongst the most vulnerable and who stand to be significantly impacted include those living in the coastal zone,along the coastal riversas well as Indigenous and forest-dependent people living along the rivers and shores.

Based on current trends, climate departure for Suriname will take place in 2028 at which point the country will experience, inevitably, huge losses and irreversible damage. This will impact the very way of life of the Surinamese people.

Thus far, Suriname has had to deal with the losses and damages, undertake adaptation interventions and build climate resilience mainly from its small national budget. Moreover, recognizing the vulnerability of the coast and ever increasing impacts on a significant percentage of the population, Suriname’s dilemma is whether to continue to invest heavily in adaptation or relocate and rebuild its entire economy away from the threat of the rising sea. This would mean shifting inland, a massive costly venture which would also have the effect of placing pressure on the country’s forest resources and which could jeopardizing Suriname’s contribution of maintaining 15 million ha forest as both a huge carbon sink and the lungs of the earth for the global community. Notwithstanding these challenges, Suriname has over the years taken steps with limited resources to prevent, reduce and cope with the effects of climate change.

Suriname continues to advance its efforts towards climate resilient and compatible development through a number of green policies and initiatives and in particular, actions to protect and sustainably use its forests. ...

With the Paris agreement, they have well established methods for carbon credit for forests. Not just Suriname, many countries do this, it's been a change since Kyoto when they didn't have enough scientific understanding of forests to quantify the amount of carbon sequestered. But they know how to do it now.

Incidentally, crop land IN GOOD HEALTH AND MANAGED WELL can also take CO2 out of the atmosphere. It's not the crops so much as the soil that does it - the crops themselves are eaten and the CO2 goes back to the atmosphere in our breath. But the soil if well managed - and for instance with cover crops rather than left bare after cropping Adding some trees to your land increases the CO2 storage too. And mulching and forage crops and adding legumes to pasture so that they take up nitrogen . If you use fertilizer then adding exactly the optimal amount of fertilizer.

Reminder, you can see the rest of the sessions here:

If any of you watch the sessions, do comment with other interesting nuggets from them.

Also as usual if there are any mistakes do say.