This is an update to my article: How A "Dwarf Planet" Gas Giant Could Challenge IAU Definition - Pluto, Ceres, Haumea Etc Can All Be Planets. That article pointed out that we could discover a gas giant in our own solar system that satisfies the IAU definition of a "dwarf planet" as it wouldn't clear its orbit if it was far enough away. First, I should have pointed out there that the WISE search has not ruled out gas giants in the remote parts of our solar system. It ruled out a Saturn sized gas giant out to 10,000 au and a Jupiter sized gas giant out to 26,000 au, but the hypothetical Nemesis would have orbited 1.5 light years away or 100,000 au.

So anyway in that article I asked if any of the exoplanets discovered so far might be dwarf gas giants if we use the same definition. Anyway I had a go at calculating  Margot's Π for some exoplanets since then. The various measures are all are in pretty good agreement in the discrimination between planets and non planets - and that's the easiest to calculate. I haven't found any dwarf gas giants yet, but have found a potential dwarf exoplanet whose mass is unknown.

If it is a gas giant it's got Margot's PI > 1 but it could give indirect evidence of two shepherd planets, and if so one may have mass around that of Mars which would make it a dwarf exoplanet. My first draft of this article had a mistake in it - as Den Maroca says in a comment, which lead to the false conclusion that there are many candidate dwarf exoplanets. This fixes it. If anyone spots any errors do say in the comments, and I'm interested to hear of any other candidate dwarf exoplanets.

Let's use Margot's ? - the various measures are all are in pretty good agreement in the discrimination between planets and non planets - and that's the only one that's easy to calculate. Very easy.

We want a heavy star with the planet far from it, so to find it I sorted the Wikipedia list of exoplanets with the most massive star first.

Here is the formula:

With the planet m measured in Earth masses, M is measured in solar masses, and a in au.. And k for those units is 833. S

One of the best candidates is Fomalhaut b. This one has actually been imaged :). Or at least a cloud or dust around it. 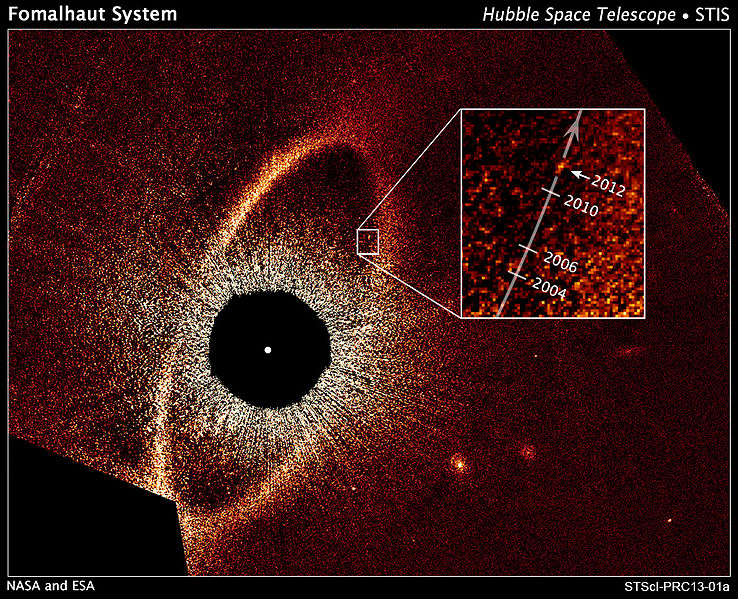 Fomahaut b is in a 2,000 year highly elliptical orbit from these observations by Hubble.

It orbits at a distance of 115 au around a star that has mass at least 1.9 times the mass of the sun. It is probably a planet of mass at most twice that of Jupiter though probably much less. So putting this into the equation: Artist's impression of Fomalhaut b (courtesy NASA). If it is a gas giant as shown, it will have Margot's PI > 1.

However surely it is just a matter of time before we find a gas giant orbiting far enough from its host star to not be orbit clearing?

Now it could be a much smaller planet as they don't know its size. What could its mass be to give a Margot PI less than 1? Let's use Earth masses:

According to one theory for Fomalhaut b it may consist of two planets, with the scattered optical light measurements detecting one of them. Both probably both less in mass than three Earth masses, or else one is much more massive than the other. One possibility they discuss is the case where one is a super Earth and the other is a Mars mass planet. If so the Mars mass planet would have Margot's PI < 1.

So, are there any other candidates for dwarf exoplanets yet? Wikipedia has a useful list of exoplanets which lets you sort it by any of the columns. So it shows Fomalhaut b as the planet discovered furthest from its host star. The other candidates are more massive than Jupiter and closer to their host star and most of the host stars are smaller too. Eventually as you go down the list you can find some very small planets close to their host stars, but when as close as that they'd have to be very small. The ones found by radial velocity measurements can be ignored as they only give us a minimum mass for the planet.

So it seems our best candidate to date.

Do say if you know of any other candidate dwarf exoplanets according to the IAU definition!

As for whether we find a gas giant dwarf planet non planet in our solar system, well that could happen at any time. It could be just on the edge of detection. For instance by chance the search for a new "Planet X" could easily accidentally turn up a more distant and larger object than expected. And whether or not, I think surely it is only a matter of time before we find a gas giant dwarf exoplanet.

I think this means that the IAU definition is both

My earlier article is here:  How A "Dwarf Planet" Gas Giant Could Challenge IAU Definition - Pluto, Ceres, Haumea Etc Can All Be Planets

Do please comment on this article with any errors / corrections / suggestions. For some reason I can't reply to your comments because every time I try to reply I get a 500 internal server error. Have tried dozens of times including commenting while logged out, just can't do it at all right now. No idea why. Until this bug is fixed, whatever it's cause, I will reply by commenting here instead.

So, thanks Den Maroca for your correction to the original article, much appreciated!