2002 NT7 is closest at 16.50 today, UTC time. It will be 61 million kilometers away and they know the distance exactly to within 127 kilometers, and the time of the flyby accurate to the nearest minute. It is no risk to Earth.

It is already well above our orbit though, it crossed the orbit of Earth several days ago on the 8th. And 61 million kilometers is further away than Mars at its closest. It is not very close. 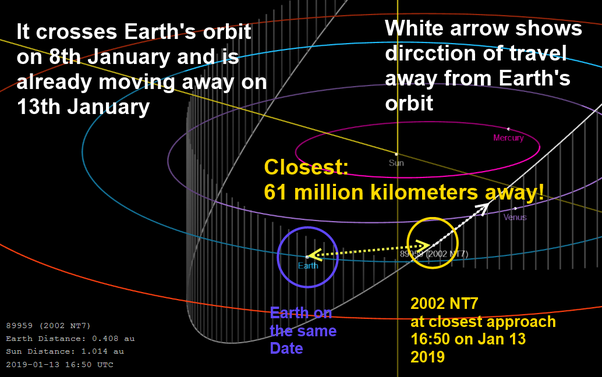 Why You Don’t Need To Worry About Asteroid 2002 NT7

I have written this article to help scared people. I continue to get PM's on Quora and Facebook, every day, by people who are scared that this asteroid is going to kill them, saying they are terrified, can’t sleep, etc, based on out of date, exaggerated nonsense in the sensationalist press. Which sadly Google News chooses to feature prominently at the top of its search results, and it is the same for other news aggregates.

Though, you may be glad to know, my two Science 2.0 articles on the topic are now in two of the top four positions in Google news.

The other two are sensationalist irresponsible fake doomsday nonsense from the UK red top tabloids, the Daily Express (top slot) and Daily Star (2nd or 3rd), which simply shouldn't figure in Google News at all. They are famous in the UK for running almost anything with a cavalier disregard for truth. Same brand of journalists as the ones who brought us "Freddie Starr ate my hamster". 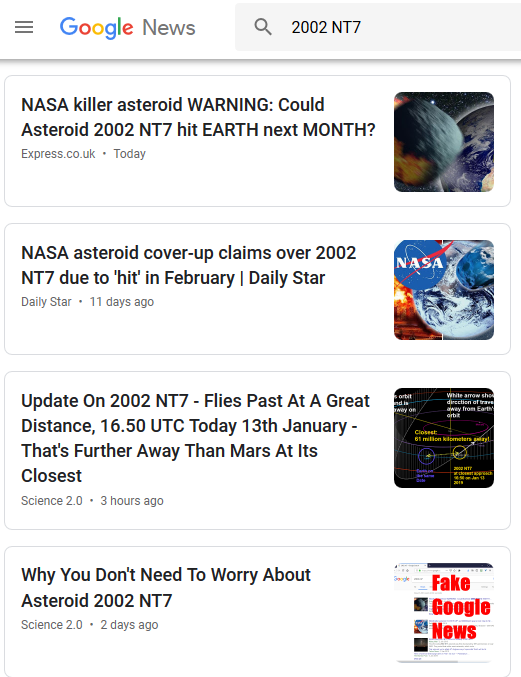 Also in Google search results in the news tab: 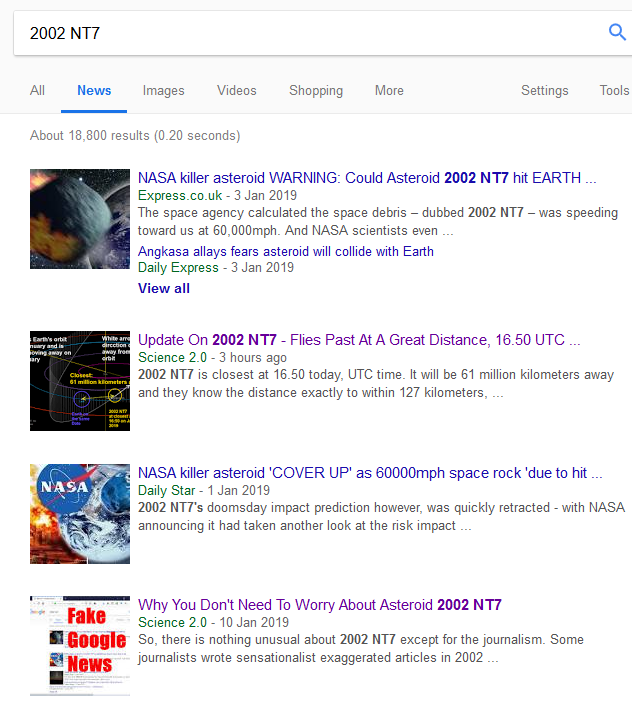 Note, 2002 NT7 is not visible to naked eye, it is very faint and needs powerful telescopes. I have been trying to find out if anyone is observing it this time around.

It is rather far away also, further away than Mars at its closest, and tiny. It would only be one of the faintest stars in the field of view at highest magnification and sensitivity and the only way to know what it was is to photograph it on two separate nights and see the motion of one of the very faintest stars in your telescope.

There are amateurs worldwide who do look for these asteroids and photograph them and send in observations to the minor planet center. But it is rather specialized. Most amateur astronomers wouldn't know how to do this. That is to say, they would know how it works in theory but not the nuts and bolts of it, they would have things to look up / check on how to do it before they got started on the project.

It’s estimated magnitude right now is 17.5 as estimated by JPL. That’s pretty hard to spot. You need excellent seeing and a good telescope. For instance by this telescope limiting magnitude calculator, leaving the rest at defaults, and a 50 times magnification and a 24″ telescope (so power 1200) then you’d see stars down to 17.9 so have a chance of seeing it:

That’s a big telescope, couple of thousand dollars or more in cost, most likely in its own separate observatory.

Here is a typical amateur who specializes in tracking asteroids, with a 30″ telescope - he would be able to see it fine: 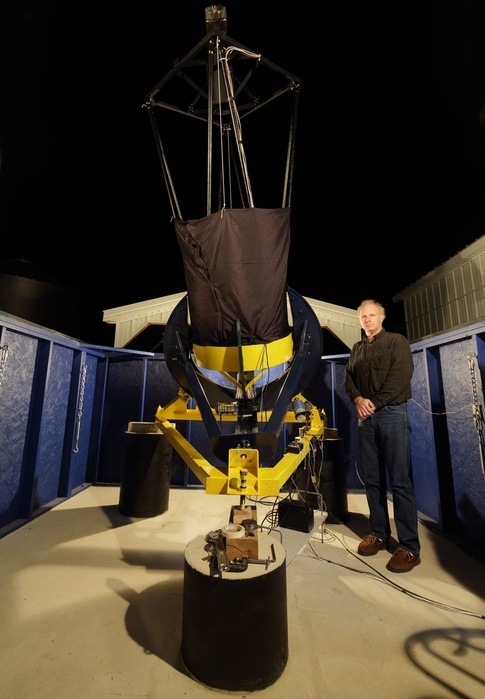 Bob Holmes with one of his telescopes - a wide field of view 0.76 m (30 in) telescope with a sensitive CCD camera purchased with a 2013 grant from the Planetary Society. Bob Holmes of the Astronomical Research Institute in Illinois, USA

It is in the constellation Virgo at:

Virgo there is a pattern of stars in the night sky. From the northernn hemisphere it is easiest to spot about 6 am to the south, look for the big dipper, follow the handle down to find Arcturus orange coloured, and continue down and the next bright star is Spica, white star, the brightest star in Virgo.

More details here, with many more links to find out more at the end: