Andrea Kuszewski
How do we learn best?


It depends on the individual! In the video below, Salman Khan is demonstrating what those of us in psychology, education, and intelligence research already knew: Everyone learns at a different pace, in different ways. And I'm not reducing this to 'visual learner' versus 'kinesthetic learner', etc. I mean linear versus non-linear, and all stages in-between.

When I was in art school, I took 3D modeling for the first time. That software was wicked intense and complicated, and like nothing I had ever used before. The first day of class, my professor did a lightning-fast live demo, which we were supposed to be following along with on our own computers. I couldn't do this. For me, it was mindless imitation, and after 15 minutes, I was lost and frustrated and discouraged.

The class took a short break, and when we returned, I changed my strategy. I watched her intensely, and took notes instead, writing as fast as I could... short-cut keys, navigational tips, sequences for different modifications, etc. I have to admit, I was a bit concerned I was falling behind, as I saw my classmates zipping through the interface.

That evening, I asked a friend of mine who was a year ahead of me in the Biomed program (and fluent in 3ds Max) to sit down with me and show me how to build a model in 3D. He did, bless his heart, for 6 hours straight ... as I watched, then periodically stopped him--asked why he did a specific action, asked how to do another action, asked what would happen if A, B, and C... for the entire 6 hours. I wanted to know more than how to build a model in 3D; I wanted to learn how the software worked, and what it was capable of. Only then, could I really innovate with it.

After that one 'tutoring session', I went on to master the software in less than 3 days, and by the middle of the semester, the quality of my 3D models surpassed my professor's. By the end of the semester, I owned that software--I no longer just followed the 'rules of use', but I had discovered new ways to hack the software for my own specific uses, in order to get the results I wanted. 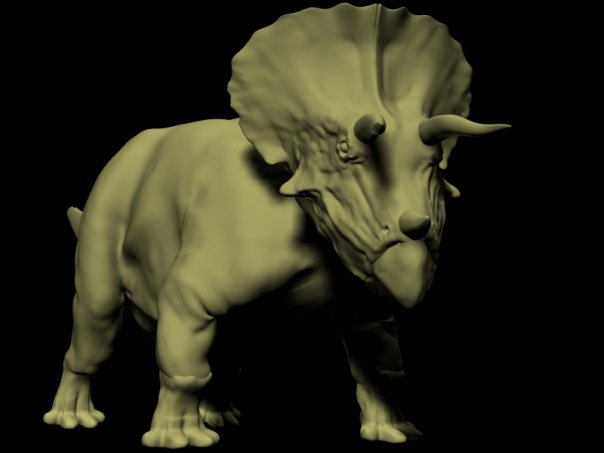 This is one of the 3D models I created in that introductory course, after less than a semester of instruction. Triceratops!!


For me, I need to figure out a new topic, medium, problem, or whatever, inside and out. I need to fail at it for a short time, and in that way, I really understand it. If I take the time to fully and thoroughly investigate and figure out a tool or problem, there are no limits to what I am able to do with it. I describe my learning style as a 'very sharp learning curve'--I screw something up and fail with it for a bit in the initial stage, at a time when others seem to be achieving ahead of me, but then once everything falls into place and I understand the inner workings, I take off with it exponentially. After a brief period, I own it. There has never been a tool, artistic medium, or subject I have failed to master when I approach it this way. For myself (and many other learners I've met like me), the initial learning stage is the most crucial for real comprehension and mastery. I need to take a little more time in the beginning to figure out everything about how that object works, but I quickly catch up and surge ahead in the end.

I really believe the future of education will be more and more focused on individuality, tailoring instruction and methods to best suit the learner. Also, learning will be more self-driven. What are the chances every student happens to learn best sitting in a desk, being lectured at, at a fixed pace? We have the technology and the tools and the capability to do better. And I believe we will. We are already headed there; society as a whole just needs to accept it and stop standing in the way of progress. Khan sets a good first example--but this is only the beginning...
The Rogue Neuron
More Articles All Articles
About