Andrea Kuszewski
It has been known for quite some time that exercise promotes neurogenesis, but now a study by Leuner, Glasper, and Gould, published by PLoS ONE this month, claims that the most intimate form of exercise - sexual activity - can produce the same effects.  And better yet- having multiple, repeated sexual experiences results in a greater positive effect than a single experience alone. Added bonus: it reduces anxiety as well.  I love that kind of data!

A lot of bloggers have been buzzing about this study for a few days now.  I mean, understandably so.  Who doesn't want to hear that lots of sex is beneficial on multiple cognitive levels?   I can practically hear the cheers rising up from college campuses everywhere.

Here's a question to ponder: If sex makes you smarter via changes in synaptic strength  following the act, can you get the same benefit from virtual sex, as long as your brain is convinced it is real at the time?  I'll discuss this idea in a bit, but first let's look at the methods and the data from the actual study.

"Aversive stressful experiences are typically associated with increased anxiety and a predisposition to develop mood disorders. Negative stress also suppresses adult neurogenesis and restricts dendritic architecture in the hippocampus, a brain region associated with anxiety regulation. The effects of aversive stress on hippocampal structure and function have been linked to stress-induced elevations in glucocorticoids. Normalizing corticosterone levels prevents some of the deleterious consequences of stress, including increased anxiety and suppressed structural plasticity in the hippocampus."

Previous studies have shown that high stress levels have a negative impact on learning and memory.  However, not all stress is bad.  I have stated before, namely in my recent presentation at the H+ Summit, that some amount of stress, of a specific type, can actually be good for you, and can improve your cognitive functioning.  In this study, they decided to use a fan favorite as their "good stress" variable: Sex.  Additionally, they wanted to see if all sex was created equal in terms of beneficial outcome.  Specifically, whether or not one novel sexual experience (acute condition) had the same impact as repeated sexual experiences (chronic condition).

Here we examined whether a rewarding stressor, namely sexual experience, also adversely affects hippocampal structure and function in adult rats. Adult male rats were exposed to a sexually-receptive female once (acute) or once daily for 14 consecutive days (chronic) and levels of circulating glucocorticoids were measured.

Finally, to evaluate whether sexual experience alters hippocampal function, rats were tested on two tests of anxiety-like behavior: novelty suppressed feeding
and the elevated plus maze.

To sum up, going on the previously discovered knowledge about exercise promoting neural growth, and negative stress impairing neural activity, they wanted to see if positive stress (a happy sexual experience) had a positive or negative impact on neurogenesis.  They also wanted to know what effects this type of stress had on anxiety levels.  Here's what they found:

We found that acute sexual experience increased circulating corticosterone levels and the number of new neurons in the hippocampus. Chronic sexual experience no longer produced an increase in corticosterone levels but continued to promote adult neurogenesis and stimulate the growth of dendritic spines and dendritic architecture. Chronic sexual experience also reduced anxiety-like behavior. These findings suggest that a rewarding experience not only buffers against the deleterious actions of early elevated glucocorticoids but actually promotes neuronal growth and reduces anxiety.

Yay! Good news! So what does all of this really mean?

Well, the fact that repeated sexual experiences can reduce anxiety is no big surprise.  I think most of us knew that already.  But what is interesting to me is the extent, the type, and the conditions of the neural growth that occurred following the sexual experiences.

*to see all of the detailed graphs and data points, go to the original article here.*

Let's look at all of the things we already know, based on this study's results, past research and basic knowledge about neurological functioning:

Mini-summary: According to these results, sex is indeed a good form of stress, and it induced neural growth. Additionally, more frequent sex is even better than a one-hit-wonder when it comes to maximizing the growth and easing anxiety.  All good stuff.  I am definitely adding "Have more sex" to my "Maximizing Your Cognitive Potential" checklist.

Now- here is where I want to touch on the more interesting theoretical concepts.  These points have not been discussed as much, but they should be.  First, why is sex rewarding and pleasurable? And why does it enhance learning?

Why aren't more people discussing the dopamine factor?!? Dopamine! My BFF! Dopamine ties everything together.

Cited by the authors of this paper, a previous study's results suggest that ICSS (Intracranial Self-Stimulation- translate: press a lever, an electrical impulse is sent to an implanted electrode to artificially stimulate an area of the brain) was enough to increase adult neurogenesis.

Another study, Dynamic Changes in Accumbens Dopamine Correlate With Learning During Intracranial Self-Stimulation ( Owesson-White et al, 2008), looked at the action of dopaminergic neurons in response to cues of a rewarding stimulus.  Basically, they wanted to see if they could condition the activation of dopamine D1 receptors by merely presenting a cue for a stimulus, without actually having to stimulate the neurons directly.

This phenomenon is similar to seeing a slice of lemon and salivating without tasting it; you have paired an actual lemon with a sour taste in the past, and now the visual cue of the lemon is enough to induce salivation on its own.  Well, that is what happened here, only the induced response wasn't salivation, it was activation of dopamine receptors.  Even better!

Dopamine, as you may know, has many wonderful functions in the brain: reward, motivation, pleasure, focus and attention- just to name a few.  The fact that the subjects in the ICSS study were able to activate those specific dopamine receptors merely in response to a cue was a pretty significant discovery.

According to the authors, "This D1 activation is highly significant because it has been linked to neural processing related to LTP (Long-Term Potentiation), a change in synaptic strength related to learning."  In other words, they were able to stimulate neural growth just by seeing a cue for the stimulus, without actually having to engage in the activity.  Subsequent research has shown this same result.

This is a pretty big deal.

Basically, you can get the neural benefits of engaging in a pleasurable activity without actually having to do anything other than trick your brain into thinking it is getting the reward.  This can be done via conditioning or paired association learning, like in the mentioned ICSS study, but what about more technologically induced ways?  Like Virtual Reality? 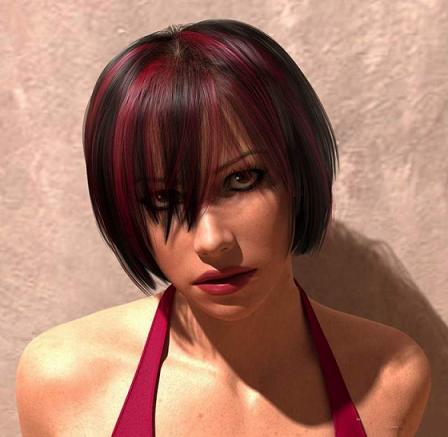 Get smarter and learn to talk to women?  This is not my World of Warcraft avatar,  mine has longer hair.

Some of my transhumanist friends swear that by the time we perfect Full-Immersion Virtual Reality, humans will no longer need or want to have sexual intercourse.  Now, I am not saying that is my personal stance on the issue, but they do have a point in some respects.

Leuner, et al claim that the pleasure component of the activity is crucial to the maximum benefit derived from engaging in it.  If this is the case, does bad sex induce the same levels of growth and anti-anxiety benefit as great sex?  Is it a continuum of minimum to maximum benefit based on how good the experience is?

For example, exercise promotes neural growth, but I haven't seen any studies that rate the quality of the exercise experience and then compare the amount of resulting neurogenesis as a function of the good or bad rating of the activity.  But if the emotional valence of the activity is important in its ability to neutralize the negative impact of the stress, one would assume the more enjoyable, the better.

So now look at Virtual Reality (VR) sex.  In theory, it is perfect in every way, tailored exactly to your utmost desires, so ultimately, it is the best sex of your life every time you switch on your little device.  Your brain actually believes it is engaging in this activity, so you would expect to see the same types of reward response in the neurons, activation of the dopamine receptors, following the simulation.  If this is true, in theory, you would also experience neural growth as a result of engaging in VR sex, even though your body is passive.

In fact, if the amount of neurogenesis achieved is in any way related to the quality of the sex or the amount of pleasure experienced, would you get even MORE neural growth from virtual sex than you would in actual sex?

Looking at the brain in this way opens the door for all kinds of artificial enhancements.  If we could trick the brain into perceiving an activity as pleasurable, activating those addictive little dopamine receptors, we could potentially enhance learning capacity merely by experiencing a simulation in our mind.  How many people do you think would spend all weekend having virtual sex if this were possible?

(I personally know of MANY who would, incidentally)

I wonder, though, after the VR sex simulation is over, and you consciously understand that it was not real, does this impact any of the positive effects that may result?  I guess the only way to really know is to conduct original research and see what results of it.

Is there any funding out there for such a project? I'm sure I could round up several hundred volunteer subjects...