Stephanie Pulford
At the opening of last week’s Nobel Laureate symposium, US Energy Secretary Steven Chu endorsed a low-tech tool to keep climate change at bay: white paint.  According to Chu’s colleague Art Rosenfeld, lightening our planet’s dark roofs and roads would be enough to offset the carbon emissions of cars for the next 11 years.

The principle behind Chu’s call to whitewash is pretty straightforward.  Light surfaces reflect more heat energy than dark ones.  Increasing the ground’s reflection will help to stave off warming of the earth’s surface.

Chu’s proposal bears a lot of resemblance to Andrew Watson and James Lovelock’s 1983 computer simulation of life on a fictitious planet called Daisyworld.  This whimsical model earth contains no life forms except daisies—one kind with white petals, and one kind with black petals. 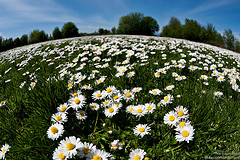 The daisies’ colors have implications both on their ability to survive and their effect on the planet.  Black surfaces absorb heat, so Daisyworld’s black daisies are able to thrive in the cold by raising their local temperature.  In the process, they retain more heat at Daisyworld’s surface, making the planet hotter.  White daisies reflect heat, increasing their own heat resistance and reflecting heat from Daisyworld’s surface.  So in cold weather, black daisies thrive and raise the overall surface temperature.  In warm weather, white daisies thrive and lower the surface temperature.

The twist in this model is that Daisyworld, like our world, is becoming warmer.  Daisyworld’s sun puts out more solar energy every year.

The daisies’ population dynamics aren’t surprising.  In Daisyworld’s cold early years, nothing can grow.  As the sun’s heat increases, black daisies can retain enough heat to live. They cover the planet, giving the temperature a boost in the process, until Daisyworld is warm enough to support white daisies as well.  White daisies reflect some of the heat that a black daisy might have absorbed, so the temperature increase becomes less rapid. 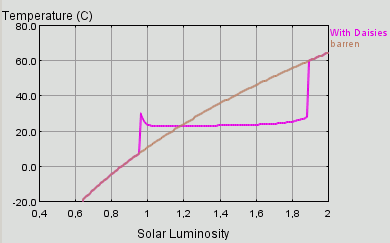 The most remarkable result of this simulation is not the changing population dynamics, but rather their effect on Daisyworld’s environment.  As long as the conditions of the planet support daisies, the shuffling daisy population can keep the temperature at a stable value.  In the plot above, the presence of reflective white daisies offsets the sun’s output until the solar energy becomes too great for an entirely reflective planet.  At this point, the daisies die off and daisyless Daisyworld returns to its barren temperature.

“The Parable of Daisyworld”, published in the meteorological journal Tellus B, was initially used to illustrate the Gaia Hypothesis of planet-organism interdependence.  Today Daisyworld provides a very obvious analogy to Chu’s white roofs and pale roads.

According to Rosenfeld’s calculations, adopting a daisyworld strategy in just 100 major cities could completely offset the next decade’s expected rise in global carbon emissions.  The benefits of such a simple building modification are so compelling that the state of California has already made white roofs a law for flat-roofed nonresidential buildings.  Thrifty homeowners are starting to adopt white roofs as well.  Painting the roof white doesn’t just have purely altruistic consequences; as hot countries already know, it saves on the air conditioning bill. 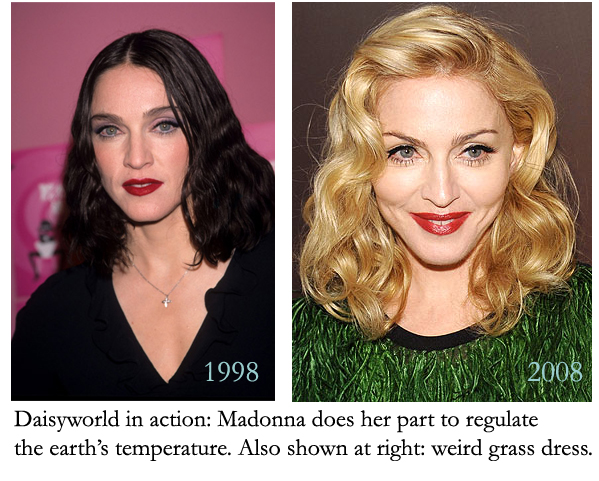