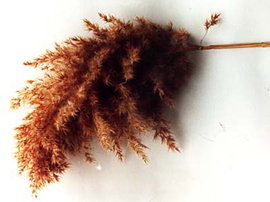 Comic books have warned us time and time again to keep villains away from radiation.  It only makes them stronger.  Researchers at University of Delaware have discovered that ultraviolet radiation from the sun increases the plant-destroying powers of the common reed, making it an invasive archnemesis to its wetland plant victims.

Phragmites australis is a giant among weeds—its bamboo-like stalks reach up to 20 feet in height.  It grows to high density on land, in shallow water, and even as an aquatic plant in floating mats. Like most weeds, reeds do their best to fulfill a manifest destiny.  Reeds propagate readily, using both seeds and shooters to grow to high density in marsh areas.

In order to pave the way for its progeny, the reed isn’t above using a bit of chemical warfare.  Many plants, such as walnuts, pine, and ferns, secrete harmful chemicals defensively to keep other plants at bay.  The reed secretes gallic acid, a trait it shares with oak and tea leaves.  But the reed uses it aggressively.  Rather than using plant poison to keep its own ground safe, it uses it to cut down existing plants in its path as it spreads.

Humans have nothing to fear from gallic acid; we use it in dyes and inks, and as an antifungal agent.  It  isn’t quite so beneficial to many plants.  Gallic acid destroys tubulin, the structural molecules that enable cells to move organelles and divide.  In the presence of gallic acid, plant roots can’t grow.    Conveniently, the reed itself has no gallic acid sensitivity—in fact, the acid is secreted by its roots. 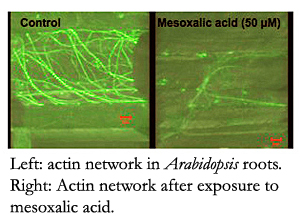 But in intense sunlight, the reed’s plant slaying power becomes even more deadly.  The reason for this is that gallic acid photodegrades in UVB light, forming mesoxalic acid.  Mesoxalic acid also attacks the tubulin and actin of neighboring plant cells, but even more quickly— a cell death cascade starts within minutes of exposure.

The reed, which has been posing innocently as a natural fence between highways and the marsh, has been a weapon-wielding plant menace all along.  And even though the reed’s chemicals aren’t harmful to humans, it may affect us yet.

The University of Delaware researchers responsible for identifying the photodegradation effect note that the increased UV associated with climate change has given this invasive species a boost, making the reed more invasive.  The exotic variety, which produces more mesoxalic acid, is crowding out lesser-producing domestic varieties.  Our wetlands are slowly filling with fitter, more deadly reeds, changing the ecosystem and proliferating a stronger invasive species.

But the reed is only one of many species that secretes gallic acid.  As UVB light exposure increases, we should be on the lookout for supervillain oak trees, supervillain poison sumacs, supervillain buckwheat, and supervillian tea.

It may be time for scientists to start working on SuperRoundup.