Grassroots Science: An Article Wishlist For The Journal Of Scientific Communication
By Stephanie Pulford | May 28th 2009 01:50 PM | Print | E-mail

Stephanie Pulford
I’m fascinated by the contributions of researchers outside of the mainstream— the monk whose bean garden seeded modern genetics, the bicycle mechanic brothers who built a flying machine in their garage, and all of those amateur stargazers who found supernovae in their favorite corner of the sky.

Modern indie researchers, often called "grassroots scientists" or  “citizen scientists”, make especially good food for thought when grad school is at its most frustrating. It’s comforting to remember that at its heart, science is still open to anyone with a bit of curiousity and good observation skills.

Apparently the Journal of Scientific Communication shares my interest. The JCOM is composing a special issue themed on “user led, P2P” research —in other words, research that is conducted outside the established structure of academic institutions. The deadline for abstracts is June 1, so right about now the JCom ought to be receiving a lot of blueprints for some exciting articles. Here are a few I’d like to see.

A far more interesting story, for my money, is how researchers can use existing internet incentive systems to gather data. By designing data-gathering content that internet users might actually enjoy—for example, a game, a puzzle, a Livejournal-ready image, or a quiz that returns entertaining results—researchers can make use of the internet’s viral momentum to access the brains of a heck of a lot of volunteers. Two excellent examples of this are FoldIt, which reimagines protein folding as a puzzle game; and chemistry.com/whyhimwhyher.com’s personality measure, which is presented in the form of a romance-slanted personality quiz. 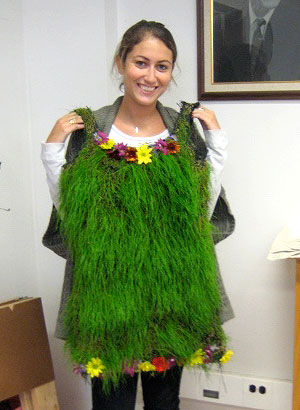 One of the indisputable riches that defines grassroots research is the number of helping hands. Thanks again to the internet and its general pro-science sentiment, it’s that will perform a bit of lab work just for the joy of helping science along. This seems to be one of the areas in which citizen science has a lot to offer the establishment. It’s already been famously put to use by projects such as the bee-tracking Great Sunflower project, the flu-tracking Bioweathermap, and the alien-searching SETI@home. I’d love to see an article that explores the structure of successful crowd-sourced science, including discussion of how researchers manage these projects, how they encourage participation, and the challenge of maintaining good standards in the results.

3. Peer review, publication, and the open access movement
As long as peer-reviewed publications provide both the foundation and the currency of research, the democratization of science and the open access movement go hand in hand. I’d love to see this Citizen Scientist issue of JCom feature a review of the major arguments for and against open access, tailored toward the concerns of extra-establishment research, with a hefty “no soapboxing” condition imposed. Since JCom itself has recently changed its format to creative commons license, I think they’d be receptive to a well-considered essay.

4. Use of Google type tools
Google knows too much, but at least it’s willing to share. Free tools like Google Earth are increasingly finding uses as the citizen scientist’s GIS, assisting in predictive models like this winter’s student Bin Laden search, and journals are paying attention. Juxtaposing informatic projects such as WDSS-II weather data and GECensus census data on the Google Earth platform put a cornucopia of information at the hands of anyone with a computer and a hypothesis. A thorough consideration of this subject would include a call to action for intrepid informaticists to create additional Google Earth tools to fill informational or usability gaps for their fellow at-home researchers.


5. Scientific Standards for Citizen Science.
DIYBio, a prominent community of indie biologists, can scarcely be mentioned in print without dredging up the question of safety and ethical standards. Predictably, Fox News broke one of the most fear-inciting quotes:

Jim Thomas of ETC Group, a biotechnology watchdog organization, warned that synthetic organisms in the hands of amateurs could escape and cause outbreaks of incurable diseases or unpredictable environmental damage.

It’s far more plausible that an amateur scientist could harm him or herself, and nearly inevitable that a novice researcher will unwittingly fumble the experiment and report some bad data. When we review a scientific publication from a university lab, we do it with a certain amount of faith that the research was conducted and recorded correctly. It’s hard to have the same faith in research done in a person’s bedroom laboratory. One of the biggest caveats to the intermingling of citizen science and scientist science is the difficulty of maintaining research standards.

There need to be new models conceived for safety regulations for people who want to work outside of traditional settings. Ham radio operation and high-power rocketry are hobbies that require licenses; I think it's only logical that synthetic biology must be regulated.

If you’re at all interested in the state of research outside of universities, I’d love to hear your wishlist for this issue in the comments.

Hat tip to A Blog Around The Clock. I’m really looking forward to this issue of JCom.