Stephanie Pulford
Thanks to advances in satellite technology, college students are giving government intelligence a run for its money.  A student geography project from UCLA made waves in the Harvard International review for using principles of wildlife diversity to narrow bin Laden’s likely location to a few promising structures in Pakistan.

Bin Laden has everything in common with a member of a species trying to escape extinction. This allowed the UCLA students used theories of wildlife dispersion to predict his whereabouts.

For example,  biogeographical distance-decay theory suggests that as we look further from some initial site, the composition of an ecosystem will change exponentially.  So, the further bin Laden gets from his last known location in Pakistan, the less he'll like the demographics.

According to the researchers, if bin Laden strays far he’ll be likely to find himself in more secular regions, with a less secure network of allies.  This allows the researchers to define a high-probability radius for Bin Laden surrounding his last known location. 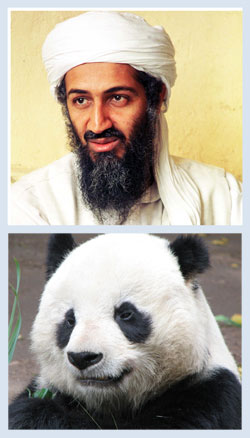 Then there's island biogeographic theory.  Islands that are large and close together provide a series of convenient microecosystems; species can easily hop to a new island if their own becomes inhospitable.   This applies to bin Laden’s impending extinction if we draw an analogy between an archipelago and a city.  If bin Laden sticks to larger cities, he’ll have more resources and more safe places to hide.

The specific needs of bin Laden helps to narrow down the search as well.  If you won't find pandas far from bamboo, you won't find bin Laden far from his entourage of bodyguards and his dialysis machine.  The researchers provided a list of details about Bin Laden that would influence his location.  He is 6’4”, so his living quarters can’t have low ceilings.  And he’s been shown to avoid locations with a clear aerial view.  Knowing a little bit about bin Laden's life helped the researchers to choose three good sites from over 1,000 possible buildings in Parachinar, Pakistan.

Notably, another group of students attempted a similar geographic prediction in 2006, but the results were far less precise.  At the time, satellite imagery of the region was limited to pixels of 30mx30m, or 100 feet square.  The resolution simply wasn’t good enough.  Today student researchers were able to use open-source imagery of topography and photography down to 0.4m pixels, including information from Google Earth.