Project Calliope
While we chug away on our Tubesat-style picosatellite, in the 10x10x10cm range, two independent efforts are working on even smaller satellites, and I thought they were worth a nod.

An aerospace engineering team at Cornell has an ongoing and already funded kickstarter for the Kicksat, which is a cube filled with 300 or more even smaller Sputnik-type "I only beep" ultra-mini satellites.  Each person who contributed gets to name their little piece.  It's a very cool engineering project that's been going on for 3 years, and looks really, really solid.  Better yet, it's met its funding goals, so it's got great prospects.  Go visit and see if you want to participate!

And, a person named Jaanus hunted up the writeup and spec for PCBSats, a super-tiny satellite 1/4th the size of a Cubesat, consisting of, basically, one circuit board + 2 solar cells + tape. 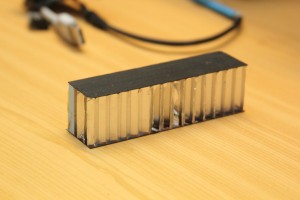 Jaanus's blog is worth reading for open space hardware fans in general, as his goal is to help find then share build/make techniques from other small satellite makers.

Until next week,
Alex
Building the Project Calliope home satellite to convert the ionosphere to music