Project Calliope
Wanna go to Mars?  It's a one-way trip, and over 500 people have volunteered already.

The Journal of Cosomology-- yes, them again-- became the accidental sign-up agency for us ordinary folk who are willing to take that one-way trip to our neighboring planet.

In October of 2010, the Journal of Cosmology received an unexpected and surprising email. A 70-year old man was volunteering for a one-way mission to Mars. Emails from over a dozen hopeful volunteers were received the next day from men of all ages, and the pattern continued until November when a flood of mails were received, over 80 in a single day. Teenage boys and old men, firemen, police, military personnel, engineers, and college students from around the world were all eagerly volunteering for a one way mission to Mars, and detailing their qualifications. Emails were even received from women volunteering their husbands.

"I didn't know what to make of it at first," says Dr. Lana Tao, executive Director of the online Journal of Cosmology. [...]  "And then it dawned on me. They were responding to chapter 12, To Boldly Go: A One Way Mission to Mars. Sure enough, Dr. Davies and Dr. Schulze-Makuch, the authors of this chapter, were also receiving emails from hopeful volunteers." 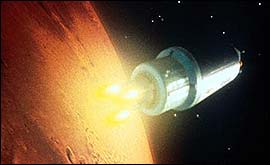 To cut to the quick, JOC is asking volunteers to send an email to OnwardtoMars@JournalofCosmology.com stating why you want to volunteer.  Hopefully they can get Congress and corporations to keep the Mars exploration flame going.

You can read their entire book, "The Human Mission To Mars, Colonizing the Red Planet", free online (or buy a print copy)-- seriously, all of it-- free.