Project Calliope
All space missions end-- some with a whimper, some with a 'fwoosh' of reentry.  For longevity, it's hard to surpass the twin Voyager probes.  They have been flying steadily for almost 30 years (since 1977), have passed the heliopause's termination shock, and are still cruising on momentum and sending back messages using the power equivalent of just 3 light bulbs.

In contrast, the WISE spacecraft just wrapped up its 13 month mission and that, as they say, is that.  WISE was an IR mission, which means it required cryogenic coolant to operate its detector.  Once the cryogen runs out, the mission is over, and no amount of cleverness can change that.

Most NASA missions have a 2-year 'nominal' life, designated the primary mission phase.  Due to, frankly, outstanding engineering, most NASA missions last well beyond that first phase and move into extended operations or secondary phases.  From an economic point of view, surviving to complete the primary mission means that the mission succeeded.  True success often comes from exceeding expectations, however.

In some cases, space missions have been repurposed past their secondary phases to tackle entirely new problems.  Whether it's the 'satellite formerly known as ISEE-3' being sent to visit a comet as ICE, (most recently) 2/5th of THEMIS being repurposed as ARTEMIS, or even the AIr Force's malfunctioning USA-193 being used as a target to test a satellite-killing missile, there's value in getting just one more experiment out of old hardware.

For Project Calliope, the orbital lifetime is brief-- 6 to 16 weeks, at best.  It's intentionally in a low earth polar orbit that will result in re-entry.  This means, on the plus side, it's not going to end up as space junk, and will completely and cleanly disintegrate, becoming lost in the general fall of space dust we already get from nearby asteroids and such.  Yes, the Earth gets anywhere from 100 to 1,000 tons of dust each day, just from plowing through space.  Which means, every day, a few micrograms of dust from space falls on YOU.  Ouch?  Hardly.

Calliope's short life ensures its science goals must be brief and meaningful.  When all the art and mirrors are pulled away, the essential point of Calliope is this permise.  Hearing the levels and variety of activity in the ionosphere in real or near-real time, as ambient sound, will help people get an intuitive sense of the activity and change at the boundaries of space.  I choose to work with musicians because they, by nature, understand how to interpret and present the extracted sounds in meaningful ways.

All I ask is a successful launch, a clean radio signal, and a life just long enough to achieve that goal. 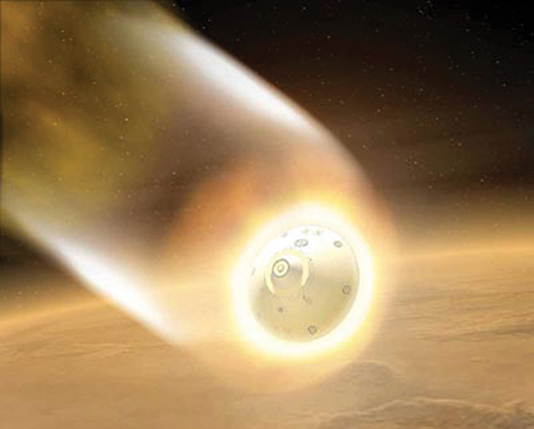