Project Calliope
I just received edition 1.1 of the "TubeSat Personal Satellite Kit Assembly Guide".  Rather than reprinting the entire 50-page instruction set, I decided to rewrite it as "Building Tubey, the Picosatellite", in faux children book style.

Welcome, kids!  Although Tubey the Picosatellite is very complex, we're going to build him with just a few steps.  Right now, we have his clothes-- a bare metal cylinder that Tubey has to fit into.  He'll get rid of his 'clothes' after launch, though.  Yes, Tubey flies naked! 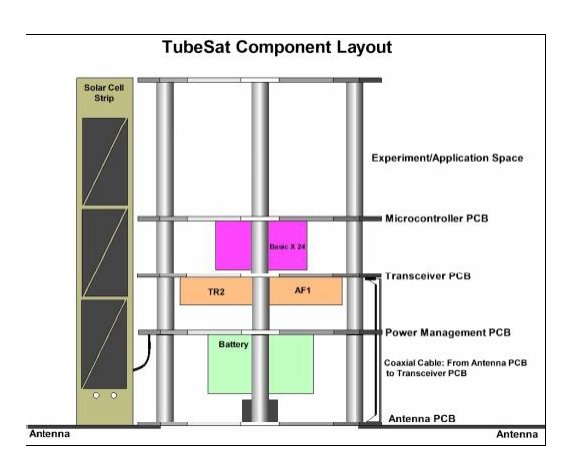 Tubey has no skin.  We can see his bare skeleton and all his innards!  We have to make 8 little boards to put around him.  It's like a knight's armor!  Except it's made out of solar cells, so it's more expensive and really easy to break. Be careful with Tubey's solar cells.

Even though the solar cells are fragile, the 8 boards they are fastened too are fairly strong.  Strong enough to be Tubey's skeleton!

At the tip-top of the tube are his eyes and ears.  This is where you'll invent and place the instruments!  Be clever, or Tubey will have no meaning to his life.

Under that, Tubey has a 4-part nervous system.  Each part consists of a pretty patterned board (PCB) with electronic parts stuck to it.

The top board is the microcontroller, Tubey's brain.  This is a programmable computer.  Technically, Tubey is a moron, but he doesn't have to do much.  Just turn things on and off, mostly, kind of like your folks late at night with their TV remote.

The next part of his brain is the transceiver PCB.  This means it's where all the stuff that lets Tubey talk goes!  It includes an amplifier so he isn't just whispering from spce.  It has a cable running to Tubey's butt, which we'll talk about in a minute.

Under that is Tubey's medulla oblengota.  That's also called his power management PCB.  It controls whether the solar cells are charging the batteries and how power gets around.

The bottom has Tubey's antenna PCB.  So Tubey's butt is where all his radio gear goes.  He has an antenna sticking out of his butt.  Silly Tubey!

Track The Satellite Diaries via RSS feed and Twitter @skyday  (or go slumming in my main column, the Daytime Astronomer)