Project Calliope
Why would anyone build a Tubesat when the Cubesat open standard tends to dominate the picosatellite world?  Well, first, there's only been a bit over a dozen Cubesats, so it's a wide open field.  Second, the Tubesat design is actually a kit, including schematics that are pre-integrated, rather than being an open spec like Cubesat.
In some ways, it's a little odd to compare them, much like you can't really compare an iPhone to an Android smartphone.  iPhones are a device; Android is an operating system used in over 75 different devices.  Similarly, Tubesat is a device; Cubesat is a specification that people fit their own ideas into.  Different approaches.
Earlier I wrote about Cubesat as a fallback for Tubesat.  I borrwed an actual Cubesat shell and, oh my goodness, am I happy.  They are more alike than different!


Here they are side by side (including a top view), with a US quarter included to show their scale. 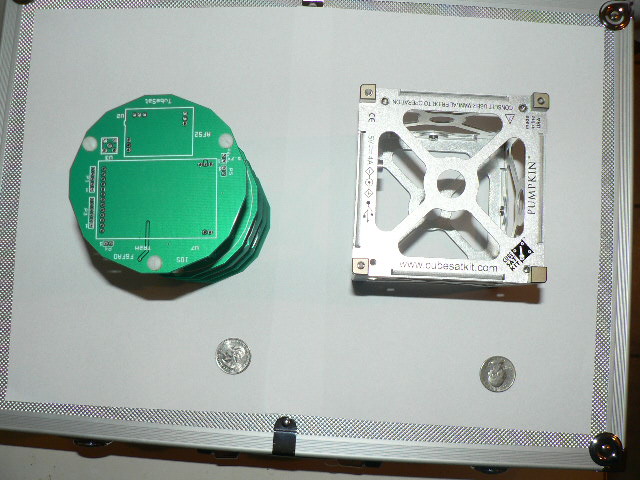 One concern I had earlier was that Tubesat has one launch company at present (Interorbital Systems), while Cubesats have anywhere from zero to a half dozen launch companies.  See, the trick with Cubesats is that, historically, most have been launched as secondary payloads or piggyback on other missions.  These were negotiated on a "who you know" basis.  There are some Cubesat grant programs, and several neat ISS Cubesat avenues.  But so far, there isn't an existing Cubesat-specific orbital launcher that an average, non-affiliated individual can use.  So in that regard, Tubesats and Cubesats aren't far apart.

From a design perspective, our main concern is risk.  If you commit to building a Tubesat, what happens if you suddenly get a Cubesat opportunity?  And if you built a Cubesat, can you fly it as a Tubesat instead?

We'll tackle the last one first.  If you build a Cubesat but want to fly with Interorbital, the people who designed the Tubesat, it turns out they'll fly a Cubesat for you too.  Problem solved!  For the first case, though, what if you have a Tubesat built and want to fly on a different rocket-- one that only takes Cubesats?

For an answer, here is Cubesat eating a Tubesat (side and top view): 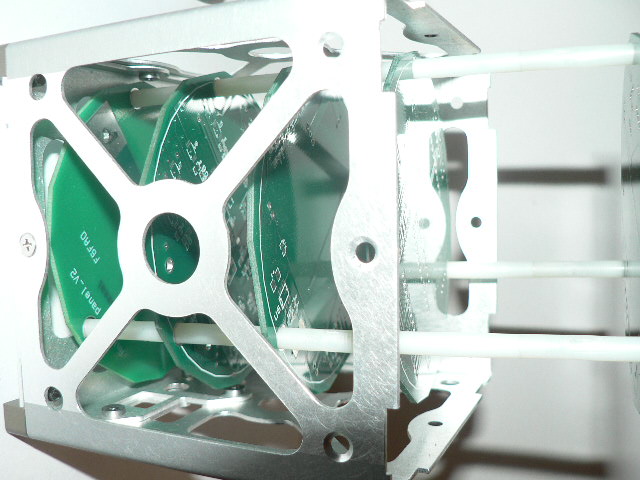 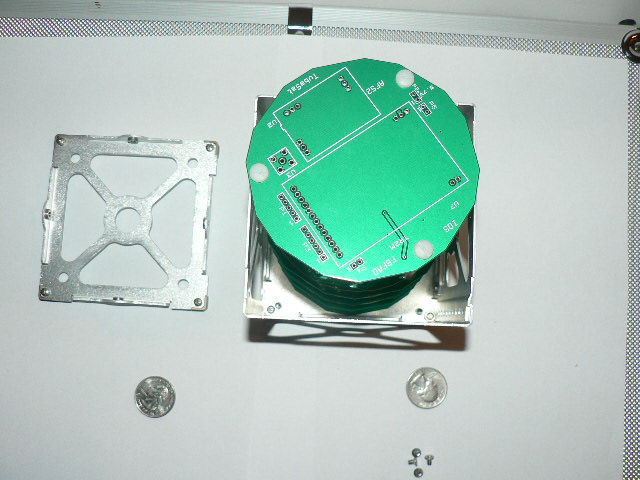 Amazing!  Just by ignoring the instrument payload area (which is larger on a Tubesat), you can fit the core boards-- antenna, power, radio and computer-- directly into a Cubesat shell.  With no modification and a few well-placed bolts, you have a zeroth-level hack.

If you want to be more sophisticated, removing the Tubesat struts and fasten the boards to 4 of the Cubesat shell sides, and you now have a big open area for your instrumentation.  Again, no PCB or interconnection modifications required.

The final transfer modification needed are the solar panels (not pictured).  They are longer than a Cubesat shell, but their active area (the part containing the solar cells) does fit nicely to the Cubesat geometry.  You can-- don't laugh-- just use a hacksaw to remove the excess, unused portions and plunk them on.  You're ready to go.

Yes, there are more elegant solutions-- forking over $200 to fabricate a new set of solar PCBs that don't require trimming, for example.  Reformatting the 4 core Tubesat PCBs to be square instead of hexagons, though why you'd want to it, I can't figure.  But really, if you want to keep with spacepunk ethos and stay with the goal of building it at home then hurling it into space, it's nice to know your options are wide open.

Technically yours,
Alex
ebook #1 on Project Calliope in editing for O'Reilly Media