Hank Campbell
Are bees in peril or not? It's difficult to know, because the moment science declares one thing not an issue (example: neonicotinoid targeted pesticides), environmental groups move the goalposts and declare something else is the problem. When honey bees were shown to be unaffected, groups proposed that wild bees were the big concern, and if amateur record-keeping and a Bayesian estimate agrees, they declare the science settled. If a world-class entomologist does a good, controlled study of bees, it is ignored.

There are over 25,000 bee species. Eight have hives. How do you count wild bees without hives? Obviously citizen science is one of the tenets of the Science 2.0 movement and has been since its inception in 2006, but spotty record-keeping by amateurs leading to guessing at priors in a numerical estimate is not going to instill public confidence in the science around bees, it is going to erode it.

And there are other deflection tactics. Bees may not be dying, they may be "stressed."

I have talked about that before. If I was a bee, I'd be stressed knowing an amateur has taken up beekeeping. While the naturalistic fallacy certainly allows people to be lulled into believing the awesome power of nature will automatically work if they go into beekeeping, in reality if you just stick a hive in the back yard you will end up with a lot of dead bees. And then want to blame someone or something else. Which has happened, to very little discussion, though the original claim it must be pesticides got a lot of attention. 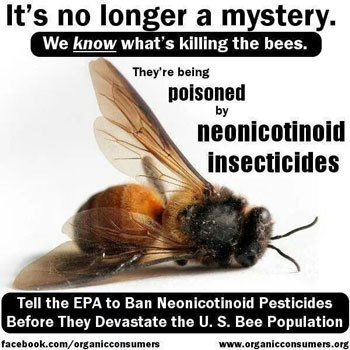 When these corporate trade reps are not scaring the public about science directly, they are creating twisted consumer advocacy groups like US Right To Know to astroturf some environmental hysteria.

A new paper in Scientific Reports (DOI: 10.1038/srep32023) delves into the food stressors of this new-ish migratory beekeeping - renting or even buying honey bees to increase pollination in a field. (1) In conducting three experiments, the scientists concluded that traveling bees have shorter lives than ones who stay in one place. But why? They implicate oxidative stress, which we know is linked to "premature aging" and a lowered immune system. And the big killer of bees is parasites, organic honey keepers are even ditching the organic process label because being organic prevents them from preventing diseases in hives. So a weakened immune system makes bees more susceptible.

When you only live three weeks, losing a day matters. Even short trips impacted the lifespan, a second experiment they detail found. (2)  The final experiment used a lot of travel - three hours of trucking per day for six consecutive days, almost a third of their entire lives. Those bees showed higher oxidative stress, even though it was how they basically had lived their entire existence.

What is the conclusion? I'm not an NRDC employee so I won't make a sweeping declaration, but while manipulating nature by moving bees around is clearly good for crops, it will also obviously be bad for the bees. Still, we can't allow that to be exploited for financial gain by groups who will invoke environmental scares at the expense of good data.

(1) Not to mention the stress in an accident - truck crashes have killed more honeybees than pesticides. If activists really cared about bee deaths they'd stop renting hives.

(2) Unless it was late in the season. Rented bees did better when they were moved to blooming fields whereas the control bees only had their natural habitat and had to work harder to find food.
Science 2.0
More Articles All Articles
About