Hank Campbell
In 2005, environmentalists got what they and former Vice-President Al Gore had lobbied for since the late 1980s; federal subsidies to commercialize biofuels. Mr. Gore later admitted that he was just endorsing biofuels to get corn belt votes for his presidential run and few academic scientists had publicly disagreed because, well, they voted for him.

The result of the last corporate subsidy effort: Corn and soy growers have been happy, to be sure, but poor people got rising food costs and biofuels remain even more of a net penalty to the environment than regular gasoline.

While traditional agriculture has gotten more efficient than ever - we produce far more food on far less land with far less environmental impact than thought possible 30 years ago - a Federal mandate and states eager to pull out of our economic tailspin may have led to millions of acres of grassland being converted to corn and soy.

7 million acres of new land used for biofuels, according an an analysis of the USDA's cropland data layer.

That is not helping the environment any more than it would if we stuck solar panels and power lines everywhere, which environmental groups have now rushed to say should be done instead of the biofiels they used to want. 4.4 million acres of cropland were removed from production but clearly it takes a long time to restore former cropland to nature versus just leaving it alone, especially when it comes to emissions. The new study took a look this carbon-emitting conversion. When added in to the already high environmental cost of biofuels, it makes those look even worse.

The new analysis covers 2008-2012, when the federal Renewable Fuel Standard (RFS) was in full swing. They estimate that the conversion of grassland emitted as much CO2 as 28 million cars would produce in a year. Letting old cropland go fallow doesn't come close to offsetting that because it takes far longer to store CO2 - and the CO2 released is going to stay in the atmosphere for a long time. By looking at satellite maps they determined that some grassland was being converted but because other land went unused, it does not look like a huge net difference. 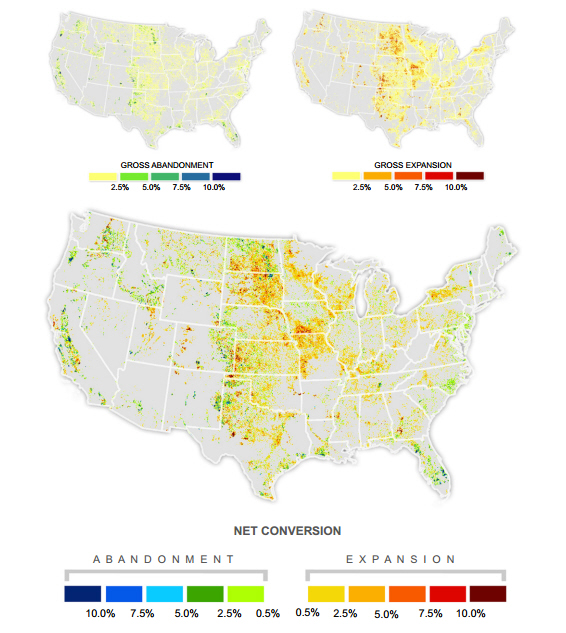 It's another bizarre case where environmental interests act against each other. In an ideal world, new land would not be used for biofuels, but environmentalists got laws passed to mandate and subsidize it so now we are paying companies to pay farmers to do just that, and then paying them to let other land go into the Conservation Reserve Program. Inexplicably, the authors of the study go after the farmers, which is like blaming the victim in a mugging. 93 percent of farms are family-owned small businesses, that's who should be penalized economically, so they have to sell out to factory farms?

The authors advocate the Sodsaver provision in the 2014 Farm Bill, which applies to six states and would reduce federal subsidies to farmers who grow on new land. Sustainability academics and environmentalists may demonize farmers but politicians and the rest of the country sure don't - food is a strategic resource so penalizing farmers by reducing subsidies if they obey the existing law is exactly the wrong move.

First author Tyler Lark presented some of the findings to the Environmental Protection Agency and if the EPA now has authority over agriculture, they should enforce the laws that already exist and ban using any new land for biofuels. Biofuel companies and farmers absolutely will not mind, taxpayers are on the hook for paying the bill anyway, but driving farmers out of business or forcing them to sell to mega-corporarations because they grow on new land while putting other land in the Conservation Reserve Program is short-sighted.