Hank Campbell
Day one if you missed it.  Science is sometimes about  taking a hunch and amassing data to confirm the hypothesis.  I am still amassing data but I am reasonably sure the way to know there is a convention of physical therapists nearby is to look for all the women in gym shorts who happen to be limping and follow them somewhere.   I don't have a lot of data points but, anecdotally, I think I am correct.   The APTA (American Physical Therapy Association) is next door.

Why the limping?  I am not sure on that.  Physical therapists usually help other people with limps so maybe, like drug counselors who were former drug addicts, people who have gone through physical therapy become physical therapists.  More likely they just work out too much.  There isn't much evidence that hurting yourself leads to future health but I am sitting here drinking coffee and eating danish so I can't be sure my method is better than theirs.

Girls in gym shorts?  Did I lose Bloggy in the crowd, you ask?   Well, yes, but not to physical therapists.  Turns out there is also a "Magic:The Gathering" card game conference nearby and card games with cool art overrule physical therapists, even though the participants aren't quite as attractive.
Magic: The Gathering Pro Tour San Diego, February 19-21.   Note how they are all gathered around to see Bloggy's awesome gaming skillz.   Thanks for letting Bloggy bring down the property values in your event, Tara!

I first played Magic when it was a small company and you had to buy the cards through the mail.  With version 3, and availability in stores, it blew up into a phenomenon, basically either creating or resurrecting the card gaming industry, depending on who you ask.  How big?   They started out long after D&D but bought that company years ago.

Like I mentioned in Scientist, Hero there are always going to be spots at a conference like this where it is tough to get to all of the good stuff.   I also can't get our editor to load in my hotel room which means I can't elegantly upload pictures.   I am using a Verizon card there because the hotel has wireless access but it is some weird third-party thing where you have to create an account and then pay a fee, etc.  It's all very 1999 so the Horton Grand gets a fail as a business hotel.

That means most of my writing has to be done at the AAAS press room, which means writing during the day when I could be listening to awesome science.   Journalists in the press room are all nice enough, but they are the 50 people on the planet I know are not reading this site so I don't need to hang out with them.

"Science, Politics and the Public" was really 'How awesome is Barack Obama and how can we frame the debate over climate action so that the public buys into subsidizing current green energy solutions we know don't work'  so I didn't stick around for that.

"Scientific Rationality and Policy Making" at least had the forthrightness to call science a deus ex machina which can 'cure all ills and be the driver of economic growth', which is either creepy or valid, depending on where you come down on the autocracy scale.

If you get the feeling that a lot of this 'communicating science' stuff is done by people who don't actually know how to do it, you are correct.   We have people here from Scientific Blogging, Ars Technica, Scienceblogs and Discover and, really, that covers a lot of readers, yet not a single one was on any panel discussing how to reach the public.

It isn't because we aren't known.  While in the press room I happened to be sitting next to a lady named Aimee Stern, who runs a consulting company and started talking to me about the site because she follows it.  I asked a few questions I always ask like "Who do you follow on Scientific Blogging?" and I got the answer I usually get; "No one, I just see the the teasers and read what interests me."   She went on to remark that we are the least ego-driven of the bloggers out there, which is something we hear a lot also.  I had to laugh when I got my 500th "Oh, you're that guy ..." exclamation upon hearing her say that.

So take heart that no one knows many of your names even if they read 50 of your articles but they don't know my name either.  They still know Scientific Blogging and think we write the best stuff and that's good enough.

She was off to meet Larry Bock, the gent who is putting on the USA Science&Engineering Festival, and biology legend Francis Collins at the Pancake House, the unofficial de facto offsite meeting spot of the convention, it seems.   I know I like, and you probably do too, that they are meeting at a pancake house to discuss the future of science in America.

I first spoke with Larry Bock because he was putting on the San Diego Science Festival and I wanted to do a festival also so it made sense to speak with someone who had traveled that road already.   Darlene Cavalier, the Science Cheerleader, put me in touch with him and it is one of the few times I got off a phone call and gave up on an idea I had and it was for a simple reason; I didn't see how I could do it as well as he could and if I cannot be number one or two in something, I don't belong there.  The man positively exudes science outreach, he put a lot of his own money into making the San Diego festival terrific, and his ability to raise money can't be matched.  I expect the USA Festival to work just as well.  UCSD has taken over the San Diego version and gotten grants, etc., but even though he has given them the template for success, look for there to be a lot of committee meetings and talk and not much else now that a school is doing it.    You can never underestimate the power of a strong personality spearheading a cause and committees can't do that.

'The Arrow of Time' was actually better than I thought it would be.   "Episodic future thought' by Kathleen McDermott  from WUSTL was good, though I could live without seeing anything that is correlated with fMRIs for pretty much the rest of my life.  Sean Carroll discussing 'From the cosmos to the kitchen' covered everything from Boltzmann to the past as a boundary condition and he always does a terrific job in front of a smart audience.  His blog, and his use of it, veers too much into political correctness and culture for me to read him every day but you can't find a more flawless speaker when it comes to making big topics digestible for a wide audience.

Michael Kaessing from University of Koln was perhaps a bit too much speculation regarding the 'arrow of time' in evolutionary biology but you have to give these guys credit for trying to make it work across numerous fields, and Sir Anthony Leggett lost me completely in "The Arrow of Time in Quantum Mechanics" but I willingly concede his target audience may have been above my physics pay grade.

At 5:30 there was a 'social media soiree' which had a lot better attendance that I would have expected.   It was billed as 'get to know your online colleagues and favorite science bloggers ...' which, at an AAAS event, usually means '... as long as they work for us'  but, no, this was truly open.

In attendance were me, of course, but also Carl Zimmer who blogs at Discover but writes for everyone that cares about good science journalism, and John Timmer, the science guy at Ars Technica (who was a lab guy before he became a writer, always a good sign), and I shook hands with Bora Zivkovic, who writes for Scienceblogs.  There may have been other bloggers there but it was pretty crowded.  Once things began to thin out I finally got a chance to meet Scientific Blogging scribe Fred Phillips, who fascinates us all with articles on technology and social change. 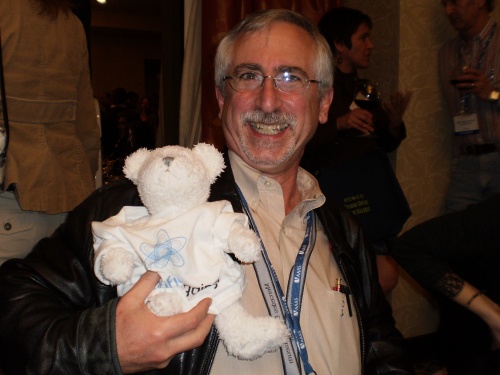 Later that evening were journalism awards which I did not attend - let's face it, if I were getting an award they would have told me by now and I am not anything close to being a journalist.   They also had the Annals of Improbable Research competing with that and I went last year and determined it was more suited to their audience than a science one - if they optimized the material for a science audience it would be different but, at least last year, they did a copy of their own awards show.  Opera about technology did little for me.

So I cursed my Verizon wireless access and went to bed early instead of attending either one.
Science 2.0
More Articles All Articles
About