Hank Campbell
DuPont Pioneer, the seed company that sells corn, sorghum, alfalfa, etc. and was considering expanding Kaua'i operations just a few years ago, has decided instead to close its Parent seed operations there. Like with astronomy, seed operations have been in Hawaii since the 1960s without issue.

But as we are also seeing in astronomy, the infiltration by unaffiliated haole activists into the Democratic Party organization and lower-level elected offices has gained a lot of ground against science since their arrival into Hawaii during the Obama campaign of 2008. They can now chalk up a victory over food and jobs, even though some of their food exports would not exist if they were not genetically modified.

Kaua'i is called "the garden isle" and it is popular with tourists - but not so much the southwest side, that is all business and home to giant farming fields and companies like Pioneer, who make genetically modified seeds. A group of citizens, backed by well-heeled environmental groups (also similar to what has been happening with astronomy) began to sue - but just the large companies - over pesticide usage, and that got into the news, which got them on NPR, then more donations rolled in, and so on. The first effort to ghetto-ize Pioneer failed, the mayor vetoed a council resolution despite agreeing with the premise because it was shockingly bad law, but the pressure never let up and was never going to let up.

So it makes sense to close it and move somewhere more friendly. Pioneer has to pay its lawyers while anti-science groups will happily work on contingency, knowing they will eventually force a settlement or a judgment. That is a problem that large corporations have been unable to solve. 'But science is on our side' has not really worked out all that well for the past 20 years and similar legacy maneuvers, like paying a billion-dollar PR firm every time they get bad press, has led to similarly poor results. 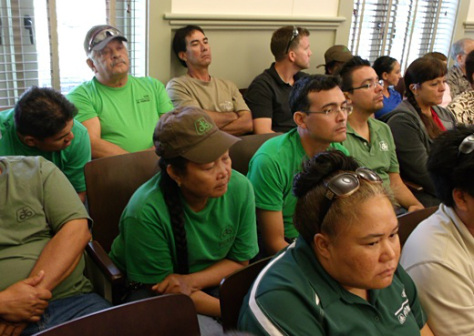 Pioneer employees will now be looking for a job. Photo by Juan Wilson.

Amfac Kauai Sugar pulled out years ago. We can assume environmentalists won't be happy until Dow, Syngenta and BASF are also gone and all 68,000 people on the island are employed bringing drinks and hula dancing for their rich mainland friends.
Science 2.0
More Articles All Articles
About