Hank Campbell
Tropical Cyclone Phailin is closing on northeastern India and by morning will bring winds exceeding 100 miles per hour and a storm surge up to 20 feet.

Windgusts near landfall could be 150 MPH. They were higher than that a few hours ago.

NASA would ordinarily provide details but while the administration has 83% of the government working during the budget negotiations, including 463 people just in the White House and a fully staffed Congressional gym, 97% of NASA and other science organizations are furloughed.

Accuweather says residents of the states of Orissa and eastern Andhra Pradesh should prepare for life-threatening conditions. Earlier today, Phailin had winds of 160 miles per hour and gusts of 200 miles per hour. If it were in the US it would be a Category 5 hurricane, or if it were about to hit Manhattan, it would already be named Super Duper Storm Phailin.

Accuweather also reminds us that the last time India had this kind of storm, in 1999, 15,000 people were killed. It will give us some perspective while we whine that the National Zoo's Panda Cam is shut down in our latest bout of political theater. 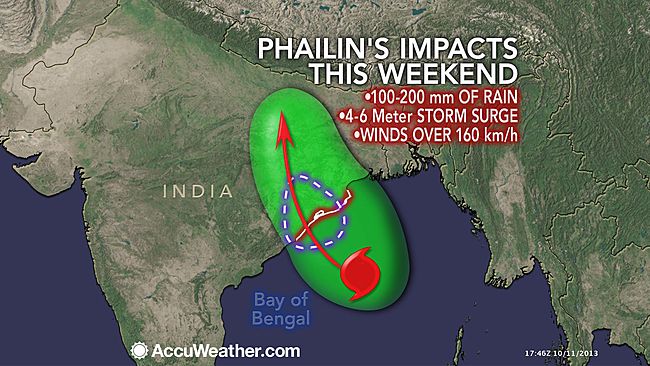 Phailin on Course to Devastate India This Weekend By Eric Leister, Accuweather
Science 2.0
More Articles All Articles
About