Tropical Cyclone Hudhud formed on Oct. 8th and began moving from east to west across the Bay of Bengal in the Northern Indian Ocean.

NASA's Aqua satellite flew over Hudhud today and took a picture of the storm that showed it was still somewhat elongated, but more organized than the previous day. The Moderate Resolution Imaging Spectroradiometer (MODIS) instrument aboard NASA's Aqua satellite provided the hint of a developing eye.

Warnings for winds, rain and surf are already in effect for the northern Andhra Pradesh coast and south Odisha coastline of eastern India as Hudhud approaches. 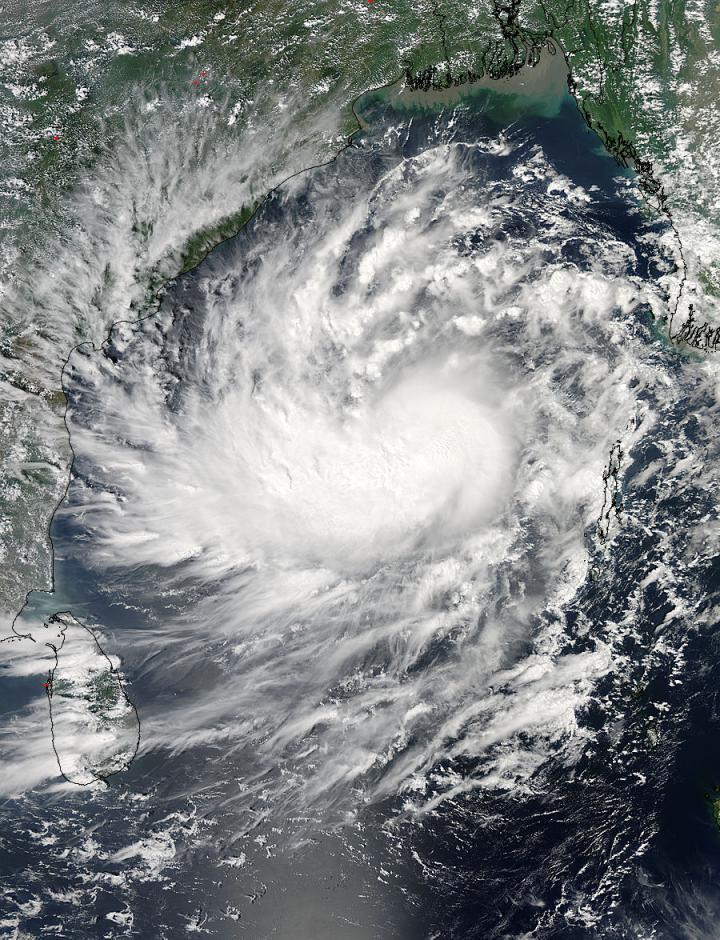 The image showed that Hudhud looked somewhat elongated from east to west, the cyclone has been consolidating and getting more organized over the previous 24 hours. The Joint Typhoon Warning Center (JTWC) stated that animated multispectral satellite imagery taken early on Oct. 9 showed improving organization of the system, with well-defined curved banding of thunderstorms now beginning to tightly wrap into a consolidating low-level circulation center.

JTWC forecasters note that analysis of the upper-level of the atmosphere (troposphere) indicates the system is located in a generally favorable environment. Hudhud is moving along the southern edge of a subtropical ridge (elongated area) of high pressure anchored to the north. The cyclone is expected to remain on a general west-northwestward trajectory.

According to the Regional Specialized Meteorological Centre for Tropical Cyclones over the North Indian Ocean or RSMC, Hudhud is forecast to cross North Andhrapradesh coast around Visakhapatnam during the afternoon of Oct. 12.

On Oct. 9, the RSMC issued the following warning for north Andhra Pradesh coast and south Odish as Hudhud nears for landfall: A Heavy Rainfall Warning is in effect. Under the influence of the system, rainfall at most places with heavy (6.5 to 12.4 cm/2.5 to 4.8 inches) to very heavy falls (12.5 to 24.4 cm/4.9 to 9.6 inches) and isolated totals greater than 24.5 cm over extremely east Godavari, Visakhapatnam, Vijayanagaram and Srikakulam districts of north coastal Andhra Pradesh and south Odisha from the evening of Oct. 11 (local time) onwards. Rainfall would occur at most places with heavy to very heavy rainfall at isolated places over remaining districts of Andhra Pradesh and north coastal Odisha during the same period.

In addition to the Heavy Rainfall Warning, Storm Surge Warning and High Wind Warning. The RSMC noted: Squally wind speed reaching 50 to 60 kph gusting to 70 kph would affect the area along and off the northern Andhra Pradesh coast and southern Odisha coast from the morning (local time) hours on Oct. 11 and onwards. RSMC expects winds to increase to 130 to 140 kph (80 to 87 mph) with higher gusts from the morning of Oct. 12 (local time) along and off north Andhra coast and 80 to 90 kph (49.7 to 56 mph) along and off south Odisha coast.

Storm surge of about 1 to 2 meters (3.2 to 6.4 feet) above astronomical tide would inundate low lying areas of east Godavari, Visakhapatnam, Vijayanagaram and Srikakulam districts of north coastal Andhra Pradesh at the time of landfall.