Tropical Cyclone Nilofar is closing in on the border between Pakistan and northwestern India and NASA's Terra satellite caught it while it passed overhead from space.

Wind shear continued to affect the storm and from their image it looks more like a comet than a tropical cyclone.

The MODIS or Moderate Resolution Imaging Spectroradiometer instrument that flies aboard NASA's Terra satellite captured a visible image of Nilofar on Oct. 30 at 06:35 UTC (2:35 a.m. EDT). Nilofar was still being affected by southwesterly wind shear, which was blowing the clouds and showers to the northeast. In the MODIS image, thunderstorms surrounded the center of the storm making it look like the core of a comet. Wind shear was stretching out clouds and showers to the northeast of the center, making it look like a comet's tail. Those clouds over northwestern India were already bringing rain along with gusty winds to the region. Nilofar was already causing rough surf to coastlines from India and Pakistan west to Oman.

The Joint Typhoon Warning Center noted that microwave satellite imagery showed a ragged eye, but the low-level center of circulation appears to be "unraveling." 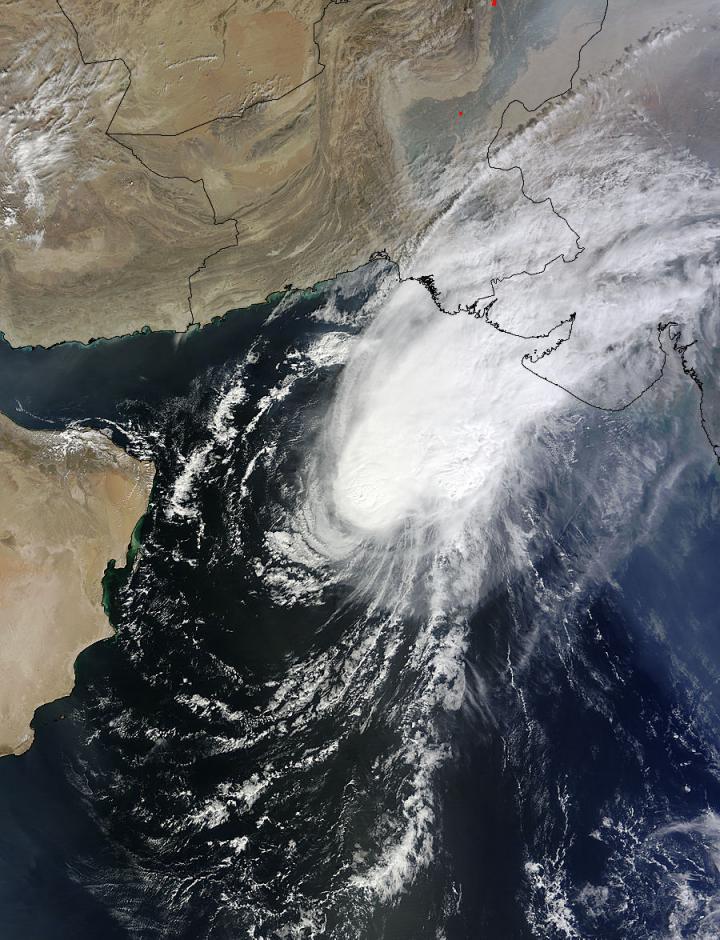 The wind shear has been weakening Nilofar, and by Thursday, Oct. 30 at 900 UTC (5 a.m. EDT) maximum sustained winds had dropped below hurricane-strength to 50 knots (57.5 mph/92.6 kph) and are expected to weaken the storm to a depression by November 1.

The RSMC warned that Nilofar will bring "moderate rainfall at most places with isolated heavy to very heavy falls over Kutch and coastal districts of Saurashtra during next two days. Light to moderate rainfall at many places with isolated heavy falls would occur over remaining districts of Saurashtra, the north Gujarat region and southwest Rajasthan during the same period."