It didn't take long before the Netflix dramedy hit "Orange Is The New Black" made its way into Psychology of Women Quarterly, a publication devoted to peer-reviewing the feminist science.

With all that humor and girl kissing and talk of beatdowns, you know an editor was excited about the chance to link a paper to the show in a press release - things have been rather tame, culturally, for readers and contributors there since "The L Word" went off the air. The American Psychological Association is, as always, happy to ride a cultural wave.(1)

A new paper says that they can connect the dots to prison from mean parents, seeing violence or that prison will result from being a victim of violence from a boy/girlfriend. No one is ever just a criminal, something had to cause it in the idealized tabula rasa world of social psychology.(2) And then the authors get to hear prison stories.

A surprising number of female prison stories involve women who look as nice as Taryn Manning. True to the spirit of feminist psychology, her character is in jail because her parents had too many children and did not live in the city. Credit and link: Deadline.

That's it, really, nothing more to see. They tell the stories as told to them by 115 inmates and then drew a correlation-causation conclusion. (3) Pimps (and all men, really) create prostitutes - that's right, pimps came first; so much for prostitution being the oldest profession (though it wasn't anyway, I have conclusively shown that making beer predates prostitution - sorry, feminism) and men also create female drug addicts and thieves.

Wait, isn't this a feminist journal?  Why are they insisting that women are helpless clay objects that are just shaped at will by any man who just happens to be nearby? It seems sort of patronizing to claim empowered women can't just decide to be thieves, drug dealers and ho's of their own volition. 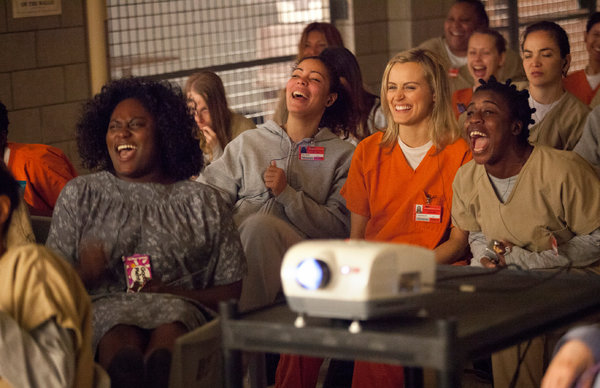 Prison is fun. But no Asians? That's racist. Credit and link: NY Times.

It doesn't matter, the ways evil men create criminals out of otherwise wholesome ethical females is not the reason people tuned in, this is:

Oh wait, that is "Black Swan", sorry. It was Psychology Today who hyper-analyzed that one, with comprehensive sources such as someone's undergraduate thesis they found on the Internet, and a paper on menstruation in Gynecological Endocrinology. Apparently when men are not controlling the mental stability of women, menses are. Credit: tumblr

Here you go, "Orange Is The New Black":

In fairness to the researchers, they did find one thing that seems sort of obvious to the outside world, but at least shows they were paying attention: 50% of the criminals they met had serious mental illnesses and 85% were drug addicts. Like with idiot psychopaths who shoot up movie theaters and elementary schools, mental illness and drugs (including the psychiatric kind) are a common denominator. But psychologists are on the front lines protesting that anyone might look at mentally ill people more carefully despite clear signs of trouble. We don't want to demonize sociopaths so let's demonize all men instead.

Yet even noting that, what they then conclude is all wrong: "The research is critical to development of gender-responsive programming, alternatives to incarceration, and problem-solving court initiatives that address girls' and women's specific needs."

My gosh, the patronization just goes on and on. Even the treatment programs have to be set up based on the existence of a vagina.

(1) Obviously psychologists could have been riding the wave of Piper Kerman's New York Times bestseller before the show came out. No, I did not read it. Despite the egalitarian woo of 'this could be you, or your best friend, or your daughter' in the promotional campaign, unless I am hauling around a suitcase full of drug dealer money, it actually could not be me.

(2) Evolutionary psychologists go the opposite way and contend much of behavior has a biological function.  Everyone is really just fishing in the dark right now - but it will get better.

(3) Don't be mean, I already told you this is a journal that claims there is feminist science. Or science of feminism. Actually, I wonder how many psychology journals were created on a dare.