Groups like the U.S. Environmental Protection Agency and the Food and Drug Administration set the gold standard worldwide for science - but they are still soundly criticized. Every time the EPA clears a pesticide it is blasted because the studies it mandates are "industry-funded", which is required by law. As are trials for drugs.

For many people, the disclaimers about side effects of drugs at the end of television drug commercials (along with the omnipresent 'see our ad in Golf magazine' small print) are somewhat laughable - like with Proposition 65 'cancer-causing chemicals' here in California, when everything is a problem, nothing is - but they have a serious societal impact when the FDA says it.

Metformin is a well-established generic medicine for people with type 2 diabetes but the FDA cautions about its use in patients with kidney problems. Their reasoning is leading to people not using it that probably should, according to a new paper. 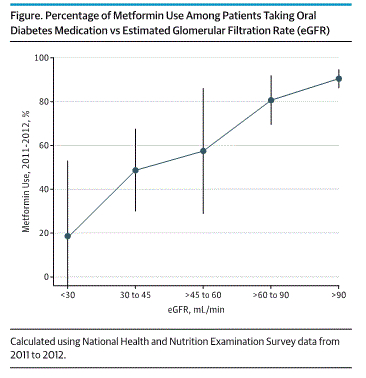 The FDA warning is different than the medical consensus because they are not using a metric that is accurate about the important thing that should be measured - true renal function - say the authors, and it means up to a million diabetic patients are not getting the best treatment (it helps control blood sugar but also improves cardiovascular outcomes) due to concern about lactic acidosis, when lactic acid builds ups in the bloodstream faster than it can be removed, possibly leading to liver failure or kidney damage.

The FDA caution is based on serum creatinine levels. If the measured levels in a patient exceed 1.5 mg/dL in men (1.4 in women), they believe that the kidneys are not working properly so they recommend against metformin, but the American Diabetes Association says the FDA is instilling a false sense of concern, since creatine levels are not the best measure of renal function. Doctors who use American Diabetes Association guidance instead measure flow rate of filtered fluid through the kidney - the estimated glomerular filtration rate (eGFR).

Using eGFR, if a patient is above 30 mL/min then their kidneys are functioning properly and they can take metformin, but 30 mL/min is about a 2 mg/dL serum creatinine level, well above the 1.5 level used as normal renal functioning by the FDA.

Since 10 million out of 25 million Type 2 Diabetics are taking it that is already a big chunk of patients and no one is going to lobby for people taking unnecessary drugs - but Professor Sean Hennessy of the University of Pennsylvania and Dr. James H. Flory of Weill Cornell Medical College wanted to know if the gap in labeling was causing a gap in care and thus adding patient risk. Using the National Health and Nutrition Survey
from 2007 to 2012, they found that metformin rates were between 48 and 57 percent for patients with eGFRs between 30 and 60 mL/min, the gray area between diabetes experts and the FDA.

If renal expert guidelines were used instead, with GFRs up to 90 mL/min (mild impairment) another 985,000 patients would be able to use it without fear.

According to their statement, FDA citizen petitions were filed in 2012 and 2013 requesting that the FDA revisit metformin and use the GFR measure but no amendments have been made.

"The FDA is overdue to revisit the contraindication to metformin use in patients with mild to moderate renal insufficiency," says Hennessy, "which is worsening the care of almost 1 million patients with type 2 diabetes in the U.S."