People who knew me in the 1990s always marveled at my classic, parted-on-the-side, immaculately coiffed style. It was retro, just like the term "marvelous' is today. Prior to that, I had a classic Caesar no-part look. He showed up in the television show "E.R." sporting that and I dismissed it as coincidence but when he then jumped onto my "Mad Men without the goop" look, I became suspicious and switched again, to a slicked-back "1980s martial arts villain" look, before changing to what I have now; a random part, more California, less Northeast serious. When you are young, it is a struggle to be taken seriously in the physics and engineering world but I am older now, so it's all cowboy boots and casual.

He became a giant star with that look so he is stuck with it now. My hair is safe. My language, not so much.

I've been forced to reinvent my catchphrases due to pop culture glomming onto those also. 20 years ago, "awesome" was my emotive of choice. It was bombastic, it was exaggerated, it was hilarious - there is nothing awesome about getting a band-aid in your breakfast at King's in Monroeville, that is why using the term made my kids laugh when it happened. 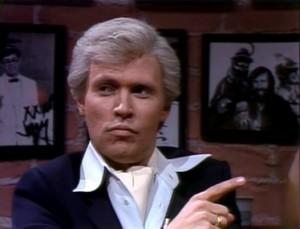 That means I can no longer use it.

In hindsight, I should have seen this coming when the character "Barney" on the television show "How I Met Your Mother" practically made "awesome" his trademark. At first it made me laugh, since I used it a lot. I then flirted briefly with rejuvenating "totally" but I wanted to see how the 'awesome' thing played played out.

What happened in the UK, that marvelous was the default choice for understated British humor and yet is now a relic? Professor Tony McEnery of Lancaster University says British culture is now George Clooney-ing America when it comes to language. A team from Lancaster and Cambridge has created Spoken British National Corpus 2014, which wants to track the changes in common language over time. And those are the results so far. It is an ill omen.

Imagine if an entire island copied my haircut. It would definitely have to go. So rest in peace "awesome", I am "marvelous" now.

What will I do if George Clooney brings "marvelous" back in style?

I don't know, it will be a totes awky mo mo, though.

Note: Want to send .mp3 recordings of how you talk to the project for posterity? Email the file corpus@cambridge.org.
Science 2.0
More Articles All Articles
About