Hank Campbell
In 2012's "Science Left Behind" I noted something that was perfectly obvious to anyone who was not in a progressive ideological bunker - that while both the American left and right were each anti-science about some things, only the right wing got any science media attention about it. And that was despite the fact that the left's anti-science beliefs are far more dangerous.

Global warming? Okay, in a hundred years it will be a problem. Skeptics are still conserving energy and recycling just as much as ardent believers right now.  Evolution? So what? If some crackpot school district tries to teach that evolution is fake their parents will just have to co-sign student loans for basic biology classes in college. No one is dying if they don't believe in evolution.

But the left is way ahead in denying science about things that will kill people; vaccines, medicine and energy.

It's not even close. In 2012, I noted, you could go to the neighborhood around a Whole Foods and you were going to find wealthy people who voted mostly the same way (80 percent of counties with a Whole Foods chose the same candidate in 2008, an unprecedented landslide, nearly the votes Rep. Nancy Pelosi gets in her district in San Francisco) and undermined agriculture, vaccines and conventional energy.

Though this obvious correlation was widely denied in 2012(1), it can't be denied any more. And some groups are making their hatred of farming science the rallying cry of their distrust of science across the board.

"March Against Monsanto" is one example but they're almost all like this. If you are reading anything from a group that has ever gotten money from Organic Consumers Association, e.g. Moms Across America, US Right To Know, but there are about 300, or has been endorsed by Sourcewatch, your skepticism filter should go way up, because they are simply political groups who have opened up a new ideological war. 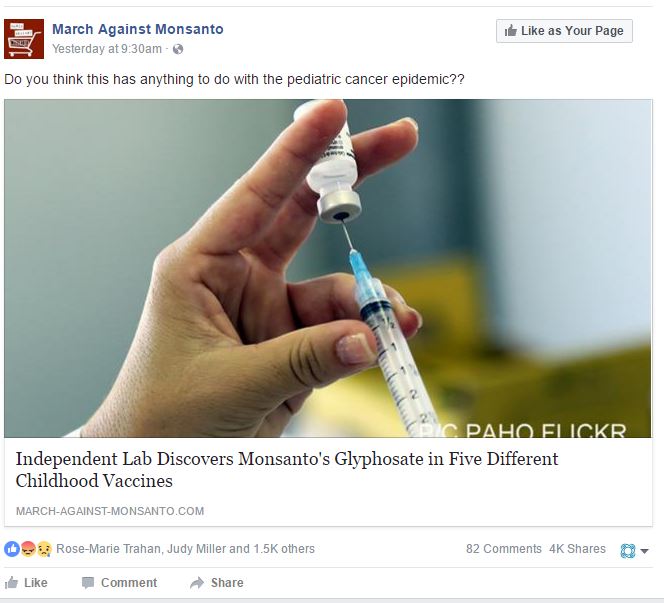 See how they have mastered their framing? They invent an epidemic, misuse how a common test works (2), and then propose a solution to the epidemic they created, which just happened to be what these well-funded groups are against.

And note the circular self-citation of their fellow lunatic:

According to a recent article from EcoWatch.com by Zen Honeycutt, MAA’s founder, five childhood vaccines were sent by the group to an independent lab earlier this year, and all five tested positive for glyphosate - with the controversial MMR (triple dose) vaccine showing levels 25 times higher than other vaccines.

Then they endorse "Vaxxed", the movie about a known fraud who was trying to sell a vaccine of his own, so he cherry-picked some kids and claimed the vaccines he wanted to compete with gave them autism. They have even invented authoritative-sounding groups to parrot them, like the Center for Disease Prevention and Reversal. Yes, you can prevent and reverse cancer with organic food, they believe.

Here is the real kicker.

"The vaccines tested by Moms Across America and shown to contain glyphosate were the following:

Wait, this was an independent lab, right? No, it's the same Zen Honeycutt.

That kind of nonsense will get you on Dr. Oz, but it's not science. It is so incredibly stupid that you wouldn't be completely crazy if you suggested conspiratorially that maybe someone working for seed companies created this as a front to make the anti-science community look insane.

That was not some just some dopey unpaid intern who is the only with that remembers the password to the Twitter account. They do this stuff all of the time: 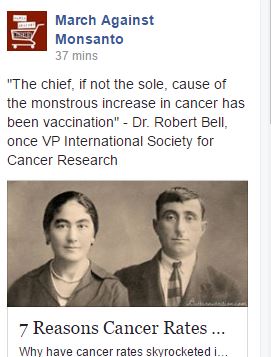 It's election season so a lot of otherwise people have bats in the belfry every four years, but these folks have a chronic intellectual condition. And they're dangerous in a way deniers for other issues can never be.

'Some people think that way, but not our elites' - and then a warning label on GMOs had 52 signatures out of 55 in Congress be Democrats.

'That denial is bipartisan' - about denying vaccines. Except a school in Marin County had 75% vaccine denial and only 20% Republicans.  And the top three vaccine denying states are Oregon, California and Washington - . Red states like Alabama and Mississippi have basically non-existent vaccine exemptions.

I could go on but I don't want to hijack my own article with 100 articles I have already written.

(2) In this case, the supposed independent lab refuses to answer any emails. Rather than using the herbicide detection kit on water, the only way it is valid, they just randomly used it on other compounds and wrote down the false positives as conclusive.
Science 2.0
More Articles All Articles
About