PLOS Removed Its Hatchet Job Against Kevin Folta - But The Problem Of Media Spin Remains
By Hank Campbell | August 24th 2015 10:16 AM | Print | E-mail 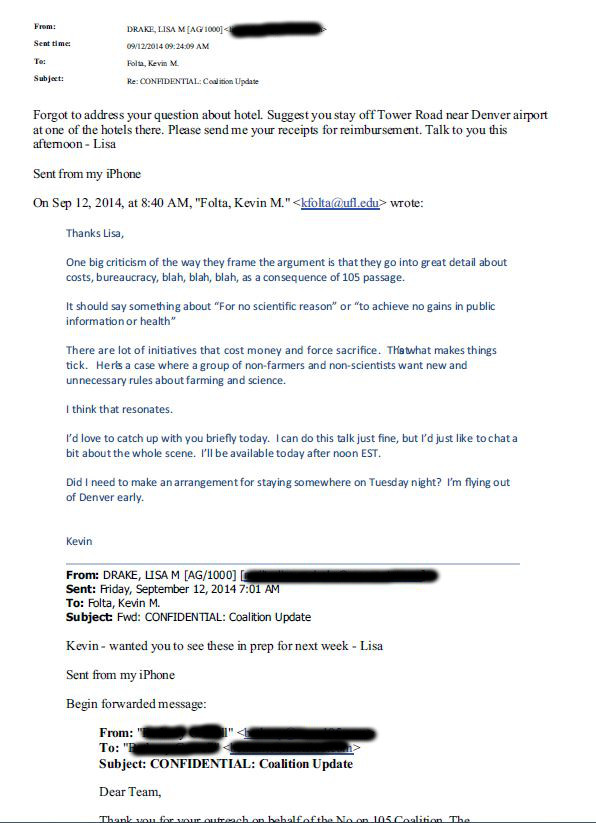 In February, a blogger at journal publisher Public Library of Science (PLOS),  issued a random, unsubstantiated smear against the organization I now run, the American Council on Science and Health - she claimed, bizarrely, that we lost our credibility decades ago by being shills for Big Tobacco. Ironically, she is an award-winning journalist. The American Council on Science and Health is famous for being anti-smoking - any journalist who was worth a darn would spend five seconds researching and know that. The walls are quite literally adorned with anti-smoking ads - but I was not at ACSH then so I said nothing.

Then in April PLOS was in the news because a man kicked back a paper to a female author, ironically telling her that her paper would benefit from a man's insight. But I was not a female so I said nothing.

Well, finally I had to speak up, for an obvious reason; invoking Pastor Martin Niemöller, if I don't speak up now there will be no one left when they come after me.

In that case, the clunky, unsubstantiated smear job was about Professor Kevin Folta of the University of Florida, a molecular biologist and proponent of genetically modified foods.That he was being bought off by Monsanto really surprised me, but there it was, written by a journalism professor and printed in the cultural darling of American science academics, PLOS.

I was surprised because he moderated a science journalism panel I was on in early June. Now, I wasn't paid a nickel to be there, not my gas money, not a hotel, nothing. I guess I got free coffee, I don't recall. And I was surprised in hindsight to learn he had been bought off by Monsanto because he didn't have a car and driver ferrying him the 100 feet from the hotel to the conference room, like rich California elites do when they visit Cannes, and he wasn't carrying a diamond-studded walking stick or a fur cape - basically, he was in defiance of the fat cat corporate-funded shill stereotype that is usually portrayed by anti-science groups.

You would never have known that he was a toadie for Monsanto, the way Mother Jones is considered to be a toadie for the Natural Resources Defense Council.

Those who play with the devil's toys will be brought by degrees to wield his sword.

In early June, the news had not broken that Monsanto had donated $25,000 to a UF education fund. Even after I read it I thought, 'This is the company organic food conspiracy types think is controlling science? Their marketing group is as dumb as a box of rocks.'

I thought that not because Professor Folta is not a good guy to have communicating GMO science, if they controlled him - he really is, when I have struggled for context or to create the perfect metaphor I look to his work - but because he won't have the reach to make a difference. And they got him for $25,000? I'd make goat noises and put their email all over the Internet if a $14 billion company thought they could buy me for $25K.

If Monsanto were really as Machiavellian (in ways anyone who has actually read The Prince understands) as portrayed, they would not hire Ketchum - we've all made fun of Monsanto for the bumbling incompetence Ketchum has displayed in trying to do science communication - and they would not try to pay off Folta, much less pay him a paltry $25,000. He already has a job. They'd instead try to buy off a writer like me, who has reached 60 million people and was losing money funding Science 2.0, and someone at Wired and then Carl Zimmer at the New York Times or another publication equivalent in reach, people who could really move the needle in the audience.

And they would do so at any cost because once they have you, they have you. They can then slowly dry up the funding and psychologists say you will try harder in hopes it will come back. That is what that Buckminster Fuller quote above means.

Yet none of those things happened. Despite Folta getting some coach-class airfare to do things he was going to do anyway, and me getting a free coffee at a conference I drove to, not much changed. He still talked about science and I still ridiculed that guy who calls himself Health Ranger and bought macaroni and cheese at the Whole Foods deli on Friday.

I don't blame PLOS culture, despite opening with anecdotes about letting their contributors get away with lax command of facts and even though they have been a lightning rod for bizarre behavior in 2015. I don't blame them because one of my favorite science communicators on Earth is Berkeley professor Mike Eisen, the co-founder of PLOS - and he is on Folta's side when it came to the hit piece in PLOS Blogs because he knows, invoking Martin Niemöller again, that if we let humanities people, or lazy-brained journalists, smear us, it becomes hypocritical and then perhaps impossible to object when the sleaze is turned on us. Eisen quickly started turning the guns on the people cackling that Folta must be on the take led by, of course, the official magazine of the anti-science community, Mother Jones.

Eisen created the PLOS culture, the last thing he wants is to have the image that PLOS is a way for humanities academics to undermine the ethics of scientists without any evidence, or for journalists blogging there to undermine ACSH because they don't accept some science we support.The real issue is that our culture has gotten intellectually lazy. All someone has to do is ask about funding and a giant swath of people will dismiss the work.

Of course, it is not just the anti-GMO and anti-vaccine contingent, almost everyone does it, without considering the ramifications and while rationalizing their own behavior. I have seen plenty of academics who think they are shielded from criticism while launching it against others. In medical stories, it is common to castigate anyone who takes funding from the medical industry without being able to show flaws in the work. In the Science 2.0 audience, if some anonymous commenter does not like an article they will ask who "funds" it, never imagining how bizarre it would sound if we implied that because they had a job their manager was controlling the content of their comment.

And you probably see now what I was doing when I called Mother Jones a toadie for the Natural Resources Defense Council while defending someone from that same charge. Wasn't that clever of me? Yet a whole bunch of people will believe it just because it makes sense and because I wrote it. I don't need evidence, I can rationalize that as what must be happening because every two years they vomit up the same "industry-funded" hit piece against the American Council on Science and Health. Skeptics know instead they should "follow the money" from NRDC and its $300 million in the bank and wonder why Mother Jones has never asked NRDC about that money - and skeptics also quickly realize why that never happens.

Professor Eisen, the co-founder of PLOS, made the same point when he noted on Twitter that true Freedom of Information Act fairness would mean issuing a FOIA to have a look at all the emails anti-science writers trade with Big Organic and NRDC and Union of Concerned Scientists and Environmental Working Group and all the rest.

also think @tomphilpott, who is as much advocate as journalist, should disclose all emails he's received from anti-#GMO organizations

What would happen to journalists if they had to put Conflict of Interest disclosures on what they write? It would no longer be open season on public health advocacy groups like ACSH or molecular biologists in academia, that's for sure.

But they will hide behind the letter of the law and also say FOIA-type transparency is not important - for them - much in the way anti-GMO yogurt magnate Gary Hirshberg weaseled, when asked about what was in the "natural" flavoring of his organic yogurt, “We’re complying with FDA laws.”

Too many journalists are no longer part of the Fourth Estate, too often they have become part of the problem.
Science 2.0
More Articles All Articles
About