Hank Campbell
The Red Lady burial site in El Mirón cave, outside Ramales de la Victoria in Cantabria, Spain, dates back to the Upper Palaeolithic 16,000 years ago. The archaeological site was discovered in 1903 but it wasn't until 2010 that bones were discovered at the back of the cave, in a small space between the wall and a fallen block. Both the bones and the sediment under them were reddish.

The remains turned out to be of a woman, between 35 and 40 years of age, and because of the color the Red Lady mystery was born. The reddish color means the use of ochre and ochre has been linked to religious symbolism in various cultures.

The Egyptians had formal religion in 4,000 B.C. and Hinduism is the oldest religion still practiced today, but religious symbolism is much older than both - as of 20,000 B.C. there were probably burials with ornamentation and weapons, but it is difficult to be sure how widespread it was because Paleolithic burial sites lacking contamination are rare. The Red Lady site even had fossilized pollen so what might be speculation about religious symbolism in other sites might be based on solid evidence there. Pollen means flowers and that there were flowers in the tomb at all seems to modern sensibilities like religious symbolism, but we may be filtering it through our culture and desire for Actualism - flowers to ancient people may instead have been to ward off the smell of decomposition. They could even have been food.

Lots of religious symbolism started with a more practical purpose. Jesus turned water into wine in The Bible but that may have been desired for health reasons as much as anything - microbes were not discovered in water until centuries later but ancient people knew beer and wine were going to be safe to drink if local water was suspect. So flowers on a grave may have had a similar practical purpose, like warding off a smell, that later morphed into symbolism. Yet ochre didn't have a practical purpose so the case for ancient religious ceremony becomes more compelling with that factored in. 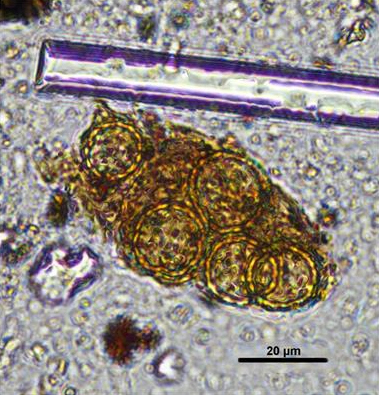 Fossilized Chenopodiaceae pollen from the Red Lady.
Credit: University of the Basque Country.

The flowers tell a story that adds to the symbolism aspect. Though there was a variety of pollen, spores and microfauna in other areas of the cave, the remains in the sepulchral spot instead contained a high concentration of pollen from Chenopodiaceae (called Goosefoot in the U.S.), which was nowhere else. In that Cantabrian region during the Lower Magdalenian portion of the Paleolithic, the area around El Mirón cave was dry and very cold. Tree coverage was sparse.  Since Chenopodiaceae evidence was not found anywhere else, it probably did not grow nearby, which would mean someone brought them to the cave.

'Why?' becomes the interesting question. Chenopodiaceae can be used as food, quinoa is a well-known species in the taxon, but no one was bringing a salad to a tomb so if it was not symbolism it was for hygiene, like warding off a smell. It's easy to over-symbolize ancient behavior. If they were a ritual offering rather than for hygiene, though, the presence of so many common symbols across areas as far apart as Spain and Wales offering intriguing possibilities about a neo-religion that is still undiscovered.