Hank Campbell
NPR, National Public Radio, is in a tough spot - they are constantly accused of liberal bias (and, let's be honest, they have never done a story on how taxes hurt poor people or how much better the environment is than 40 years ago, so there is something to that perception (1)) and no one who gets taxpayer money likes being a political football and having people in government asking what they do with the money but that is the price of taking government money.

When I was young, PBS, the Public Broadcasting System, which is the television brother of NPR and the other big project of the Corporation for Public Broadcasting, was a much different animal.   You could fund only specific programs you liked and you knew they were telling the truth about what they did with the money.    I enjoyed watching Andy Hardy movies and Boston Blackie and whatever else they showed when I was young.    They didn't waste money on a lot of original programming because people were getting it from the big networks.    As PBS did more original content and also became more political, that bond of trust with and affection from the public was lost.(2)

As an adult, and given the more politically charged climate, I still don't think the US should fund a national newspaper...and that means they also shouldn't fund a national television or radio station either.

Science Friday, hosted by Ira Flatow, is on NPR and is a good show.   Is it good enough to make it in the commercial world?   Maybe we'll see.  I learned only today it is not an NPR show but is privately produced and taxpayer funded.  And NPR doesn't seem to like them much while the NSF doesn't want to be a continual piggy bank for content (who knew they ever did?  You think I'd deal with advertisers if I could get NSF funding??).

Ira Flatow wrote to Jim Fruchterman of the Huffington Post (errrr, a leftwing blogsite, so you see what detractors mean about NPR bias):

We at SciFri are facing severe financial difficulties, i.e. raising money. NSF [National Science Foundation] has turned us down for continuing funding, saying they love what we do, we are sorely needed, but it's not their job to fund us. At the same time, NPR has said the same thing, telling us that if we want to stay on the air, etc, we now have to raise all our own money.

Despite what listeners may think, NPR only gives us about 10 percent of our funding.

Well, the NSF is right, it isn't their job but it's a funny thing for NPR to say - NPR is basically telling them they aren't very good.   Or that science is not popular.   It may be that freedom of expression and social tolerance, hallmarks of NPR, appeal to the audience but science does not.  Indeed, if that is so, "Science Friday" should take its program elsewhere.(3)

But who is the NPR audience anyway?    Poor, left-wing hippies you might assume, as I once did.   Once you know, you might agree that perhaps NPR needn't fund "Science Friday" but you might also agree that you shouldn't fund NPR.

It turns out that while insisting they can only do their quality independent programming utilizing the taxes of the middle class, NPR media salespeople will happily tell you how wealthy and educated their demographic is.   Here are some examples (edit - Internet archive now, they deleted the page after my criticism):(4)

Listeners are affluent, active consumers, business leaders, and involved in their communities. Nearly 70% of all listeners are ages 25-54 with a median age of 42.

That's the average NPR listener, folks, that's almost as much as members of Congress, and that is an even more educated audience than we have, despite our being a science site.   Oh, and we get no government funding of any kind, if you didn't notice me mentioning that a few paragraphs up, yet here we are.

If those are NPR listeners, why does NPR need taxpayer money at all?   NPR executives note that the money they receive from CPB's $400 million budget is only 16% of their total but that again leads to another question of why they need funding from taxes.   Plenty of non-government businesses in America deal with 16% drops in revenue and are forced to work around it.

Likewise, if "Science Friday" is losing the money they get from NPR and NSF, it's a bad idea to claim it's an insurmountable obstacle - it means their costs are too high and they need to do what businesses do and cut costs.   Or go to actual commercial radio instead of the faux-non-commercial radio NPR pretends to be.

However, if you listen to NPR you are likely in that $150,000 income range they like to brag about so you can instead support "Science Friday" directly by going to their donation page.

(1) The last time a Congressional subcommittee voted to cut CPB funding, Moveon.org, Common Cause, and left-wing media pressure groups set out to halt that - it is unlikely they would have done that if Fox News lost money.

(2) Not that they don't have fine stuff.  I just watched Ken Burns' "The Tenth Inning" but are we to believe no network would have paid for it?   Only PBS can produce this thing or Ken Burns would only work if it was on PBS?  Complete rubbish that only American taxpayers will pay for a documentary on baseball, America's pastime.

(3) There is a 100% chance that I could get financing to do a nationally syndicated radio block of daily science shows and make it work financially, and people would listen to it the same way they do sports or politics.  So, Ira, if you want to discuss, give me a call.

(4) Partisan elites rejoice that Newsweek and The New Yorker are specifically mentioned as stuff you read if you listen to NPR. 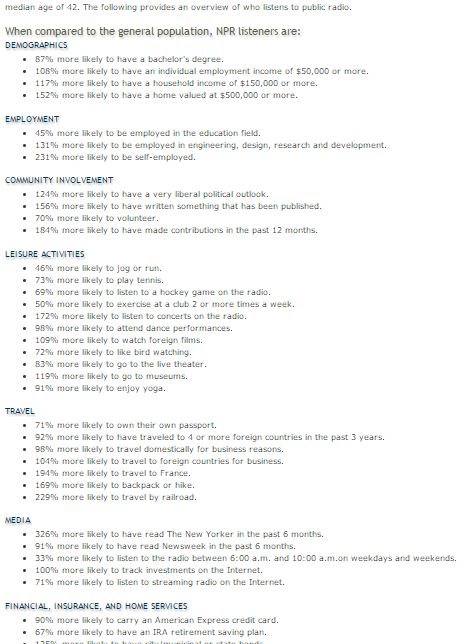