Hank Campbell
Thomas Edison did a lot right but there is one thing he got very, very wrong.

Namely, a talking doll that was sure to be an inspiration for generations of future horror movie fans.   It was a bold idea, of course, Edison had a lot of those, but sometimes even a marketing juggernaut can't make something work for the public given technological limitations - we are also talking to you, 3-D movie makers.

The doll was a collaboration between Edison and William Jacques and Lowell Briggs, who started work on miniaturizing the phonograph in 1878.   This doll from 1890 was the first attempt to use sound in a toy.   Unfortunately the tiny phonographs were pretty sensitive and easy to damage - decades later manufacturers would try to put record players in cars also, with no success there either. 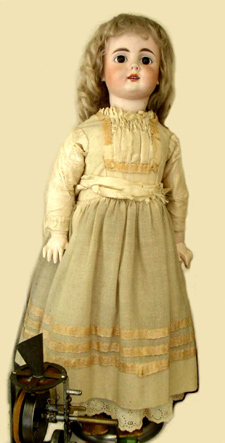 The sound technology wasn't very good even when it worked so the hissing and scratches and pops indicative of early recordings were downright eerie when combined with a sweet voice doing a nursery rhyme.    Here is a sample of “Little Jack Horner”from one of the actual dolls, courtesy of the Thomas Edison National Historical Park and GE Reports.

That recording is the only thing that would have made "The Ring" even scarier than it was.   And, this was for kids, and kids don't always follow instructions.

“To operate the doll you had to turn the crank by hand, turning at the perfect pace to keep the right count,” says Robin Rolfs, a collector of Edison dolls and co-author of “Phonograph Dolls&Toys.”

Anyone reading this site knows exactly what happened when a creative kid with a bit of mad genius got the thing - they did the same thing we would all do.  They sped it up and slowed it down to make it sound as creepy as possible.  They took this 4 lb. metal behemoth apart.  And if you were paying $25 back then, the average salary for a month, you did not want kids taking it apart.


The crank mechanism up close.   The wax disks in the mini phonograph wore out quickly. The hand crank is on the right after being removed from one of the dolls. Images: Courtesy of Robin and Joan Rolfs.

More reading, should you choose: 10 Inventions by Edison you never heard of.    And a hat tip to GE Reports, for always sending me the best stuff.
Science 2.0
More Articles All Articles
About