Home > Archaeology > The Science of Motherhood

Kimberly Crandell
Archaeologists have made a discovery in Egypt, which fills in a missing piece of history in the Old Kingdom ancient burial ground of Saqqara.  The newest discovery, found in the sand south of Cairo about two months ago, most likely housed the remains of Queen Shesheshet.  Shesheshet, the mother of King Teti, ruled from 2323 BC to 2291 BC and founded Egypt's Sixth Dynasty -- over 4,000 years ago.

Egypt's antiquities chief, Zahi Hawass, identified the significance of the pyramid through the process of elimination.  "The only queen whose pyramid is missing is Shesheshet, which is why I am sure it belonged to her," said Hawass. "This will enrich our knowledge about the Old Kingdom." (1)

Hawass said the headless, 5m-high pyramid had originally reached about 14m, with sides 22m long.  The monument had originally been covered in a casing of white limestone brought from quarries at nearby Tura. Archaeologists plan to enter the pyramid's burial chamber within two weeks, although most of its contents have most likely been taken by thieves.

The pyramid, which is the 118th found in Egypt, was discovered near the oldest pyramid at Saqqara -- a burial ground for ancient Egypt's rulers located some 30 km south of modern-day Cairo. 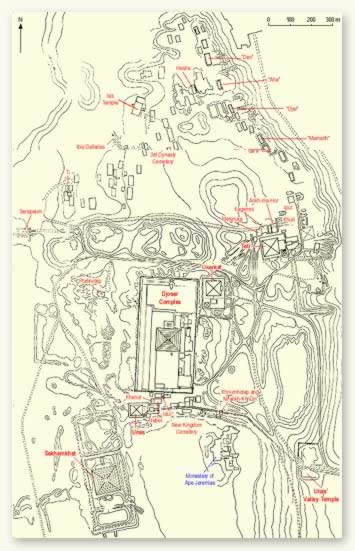 While Memphis was the capital of Anchient Egypt, Saqqara served as its necropolis. Although it was eclipsed as the burial ground of royalty by Giza and later by the Valley of the Kings in Thebes, it remained an important complex for minor burials and cult ceremonies for more than 3,000 years, well into Ptolemaic and Roman times. (2) View of Saqqara necropolis, including Djoser's step pyramid (center). The mound to the far left
is the Pyramid of Unas; the one on the right is the Pyramid of Userkaf.
The step pyramid at Saqqara was designed for King Djoser (c.2667-2648 BC). It is the oldest complete hewn-stone building complex known in history. It is also where the tomb of King Menes, the first pharaoh of Egypt lies.
The Science of Motherhood
More Articles All Articles
About