Camillo Di Cicco
At Cairo museum, on Queen Hatshepsut’s tomb in Deir el Bahari,it shows the chief Parihou with his wife Ati, Queen of Punt, (an area not still geographically established: Yemen, Somalia, Ethiopia, Eritrea, Sudan?) while they offer gifts to the Egyptian Queen Hatshepsut (1516-1481 BC).

A naval expedition to the mysterious land of Punt was undertaken in the summer of Hatshepsut’s eighth year as queen; she sent a fleet of five ships, headed by her Chancellor Senenmet. The Queen of Punt shows a rugged face, gluteal and femoral obesity, hyperlordosis and symmetrical deposits of fat on the trunk, limbs and thighs. 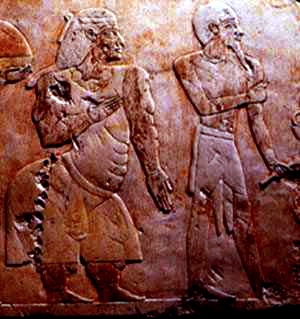 Bioanthropological and medical geneticists have studied the Queen of Punt, even though she died nearly 34 centuries ago, in order to place a precise diagnosis, but with difficulties such as not having a mummy for such disposition. Moreover the clinical picture seems to be a single phenotype grouping several dermatologic pathologies (Launois Bensaude’ Lipomatosis, Neurofibromatosis, Lipodystrophy, Dercum disease, Achondroplasia, Proteus syndrome and X linked dominant hypophosphatemic rickets, Familial obesity) therefore I share the same opinion of Farag, Sabry and Iskantar and consequently hypothesize that it can be coined a new pathology named “Queen of Punt Syndrome.” (Abstract)

References:
1.TI Farag, MA Sabry, A Iskandar,1999. Journal of the American of Human Genetics, October, Supplement Abstract#803.
2. Bradbury Louise.1988."Reflections on Travelling to 'God's Land' and Punt in the Middle Kingdom". Journal of the American Research Center in Egypt 25:127-156.
3. Kitchen Kenneth Anderson. 1971."Punt and How to get There". Orientalia 40:184-207.
4. Meeks Dimitri.2003."Locating Punt"In Mysterious Lands,edited by David B. O'Connor and Stephen G.J.Quirke. Encounters with Ancient Egypt 5. London:Institute of Archeology, University College London and Press. 53-80.ISBN 1-84472-004-7.
Scientist
More Articles All Articles
About