Continuing from the prior article... “The Sun Ain’t Yeller”, cries the heliochromologist.  Undaunted by tradition, dogma, or tens of thousands of erroneous magazine and textbook images of our Sun, heliochromology, a colorful heterodox, is winning the day because the Sun is what it is, color and all, regardless of other’s puerile incognizance.

The answer is not a vague, subjective one, but an objective one, as sure as red apples are red.  Heliochromology is our path to enlightenment that will bring resolve to this color conundrum -- a subtle polemic that has been dormant to all of astronomy for hundreds, nay thousands, nay nay, tens of thousands of years, perhaps since mankind first discovered the Sun and its daily color metamorphosis.

We know not who the sagacious sapien may have been who indubitably made the first astronomical discovery of all time – the Sun.  Yet, dare none to ask its color?  Who knows what color lurks hidden behind the blaze of Sun? The heliochromologist knows!

The Sun is certainly a worthy topic of study, one with a dynamic and powerful past. Our star has no equal as an observable object and it is even an object of great worship.  Consider Ra the Egyptian god.  “Ra Ra shish cum bah” – where do you think that mantra comes from?  Even today our host star is worshipped, especially during the spring equinox when thousands stretch along miles of beach and soak in excesses of radiation, possibly proportionate to their beverage consumption.  Yet, ask them the color of their god and they only offer wild guesses, more often than not yellow is their response.

So, as other worthy scientists have been marching ahead including astronomers, solar physicists, helioseismologists, nuclear physicists, and others, let us now join our color paladins, heliochromologists, as they enter the tail of this triumphant science parade and learn of their brooming efforts that has helped make a cleaner and more colorful path for all. [/corn]

Why ain’t the Sun yeller?  There are two strong elements that come together to reject any yellow argument:  the Sun’s color we observe here, under appropriate attenuation, and the colors that were scattered away by our atmosphere (extinctions).  This simple finding was not expected initially but was realized after much stumbling along my amateur way.

A number of attempts were made in trial and error fashion to help get a handle on what might and might not advance this color quest.  The following are most of the examples:

1)      The SAD -  Solar Attenuation Device consisting of a black painted paper plate with a pencil glued to its center.  A 0.5 mm slot was made in the plate that allowed me to observe the Sun with a 99.9% attenuation while the plate was spun by a cordless drill.  [It costs about 15 cents to make as all parts were used.  Perhaps it is the worlds cheapest scientific instrument.]  The Sun was still too bright to determine its color, as seen terrestrially.

2)      Random orientations of quality 3 inch convex lenses and prisms were tried but produced little toward any progress.  Worse, it did manage to catch my blue jeans on fire.  [When a restaurant hostess now asks me if I smoke, I say “No, except when I’m on fire.”]

3)      Invention of the asterochromograph.  This device uses a simple, calibrated mask that alters the Sun’s spectrum that has been dispersed by a prism -- one with five place accuracy of refractive index – to obtain the matching energy for each wavelength of that of the AM0 spectral irradiance data found from space observations. 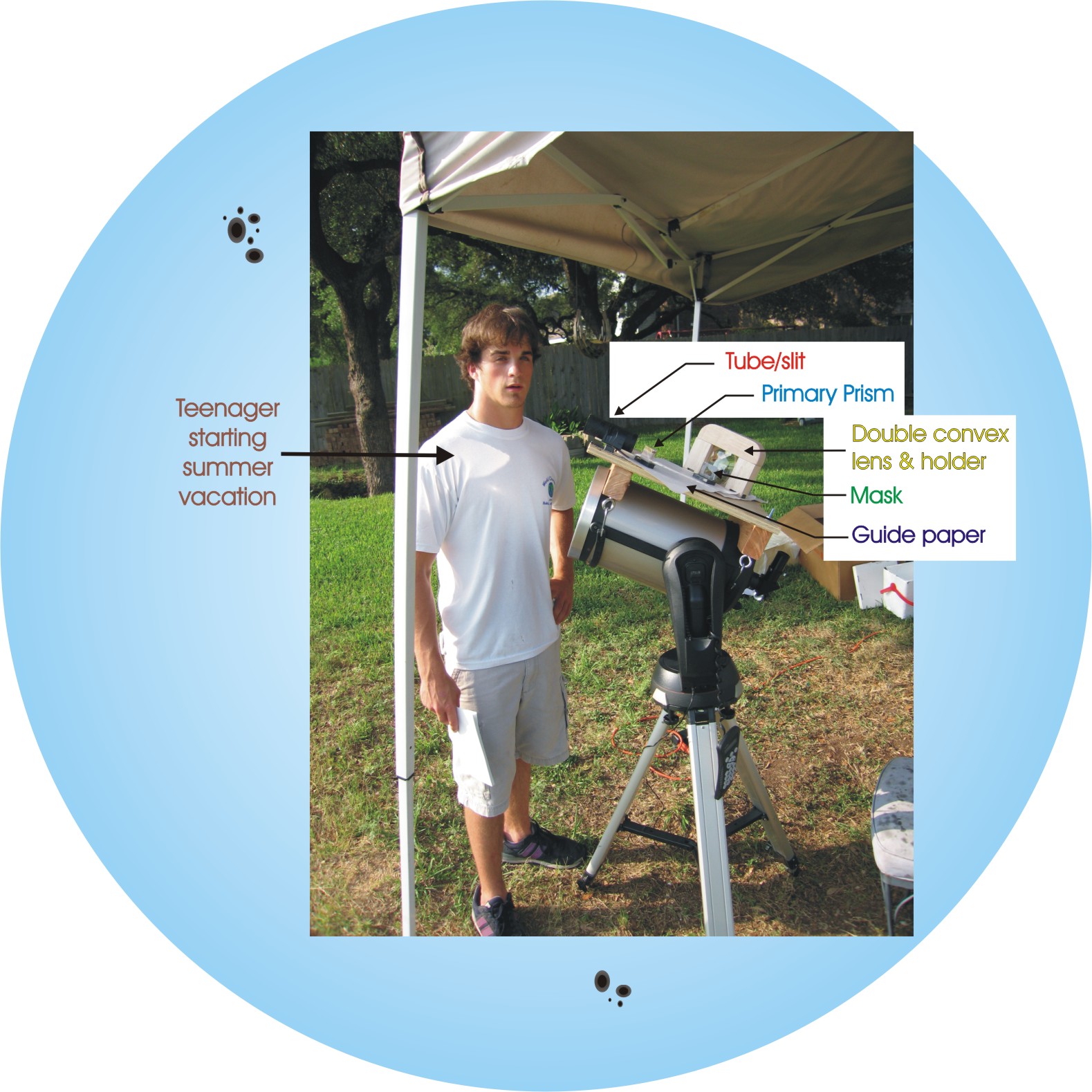 This adjusted spectrum is then scrambled and homogenized into a small dime-sized spot to allow us to simply see the color of any object with known spectral irradiance data.  This spot’s color accuracy can be easily verified with a simple spectrometer.  The original prototype was made and mounted onto my 8” SCT to provide Solar tracking.

4)      Taking advantage of Kitt Peak’s great AOP (Advanced Observing Program) for the public, I did an all-nighter with their technician Roy Lorenz.  [What a fun time, an event I recommend to everyone.]  Roy was very helpful and patient as he helped me obtain images of solar twins.  The following image is of 18 Sco and uses a astrophoto technique known as progressive defocusing.

Taking the image progressively out of focus while altering the tracking rate allows the color of a celestial object to be revealed.  Stefan Seip is a photographer who has produced beautiful images using this technique. Here is one of his images.

5)      Using various computer color programs we can determine color given the known spectral irradiance data.  Of the few that I found, none seemed to work.  One model can be found at this site, but claims the Sun is peachy pink!  Is our Sun a girl star???  [Actually, peach pinkish is the author's color descripton, but I’m in this for the fun, as well as, truth.]

6)      Observing the simple objects such as clouds, the Moon, and other objects.  If the Sun were, say, green, wouldn’t the Moon look green?   Wouldn't clouds look green, too?  They all look white, don’t they?  Look at the color of this astronaut:

He not only looks white, he is white….Ed White!![He was the first US astronaut to walk in space.]  [I had the pleasure of meeting him and hearing his speech.  Every time he referred to his cockpit companion by saying “Jim and I”, people laughed, but I was too young to catch the pun (Gemini).]

7)      Finally, the best of all evidence:  The Solar image of the Sun from Kitt Peak taken by Roy Lorenz and Dr. Drew Potter.

This last one came days after the all-nighter with Roy Lorenz, and while my wife slept in the Spartan astronomer’s dorm – that was also the night of our 25th wedding anniversary (thanks again Honey!).  The next day, after I had no sleep, I took her on the late morning tour through the McMath Pierce observatory, world’s largest Solar telescope.   Their main projection table had a small image about the size of a dime or nickle cast upon it.  This intrigued me and I asked what it was.  The person who was adjusting the tracking system said it was Venus.  Venus in broad daylight was impressive enough, but here was a reasonable nice disk of it, too.  He said you can do a lot when you have a f50 telescope.  Their other and smaller projection table had a nice, bright solar image upon it, though I saw no sunspots.  I was intrigued with the observatory more than I was cognitive of my original goal. On the way out of Tucson, and after some sleep, it finally hit me what I missed.  The color of the Sun was flooding down on me and I had overlooked every drop!  The Solar projection table had the proof that refuted any claim whatsoever that the Sun is yellow.   This, however, was  predicated on their telescope not using any filters.  I later confirmed with them that they were not using any filters, which could have easily altered their Solar image.

Remember me saying that if we knew the color of the Sun seen terrestrially that we could add the colors back into this image in proportion to those scattered by our atmosphere.  This would be rather tricky except for the fact that the Sun’s image on the table was white -  all white, from limb to center.  This makes the non-yellow claim extremely strong.  Why is that?  Well, recall that our atmosphere scatters blue light far greater than any of the longer wavelength colors.  [Rayleigh Scattering describes this and shows that this scattering is inversely proportional to the fourth power of wavelength.  Blue is not quite half the wavelength of red, and it scatters blue photons about 8 or 9 times more than red photons, depending on which wavelengths of those colors you want to compare.  This scattering effect is why the sky appears blue.]  So, if we add primarily blues to a white object, could it ever cause it to become yellow?  Nope, not no way, not no how.  The Sun ain’t yeller, indeed.

But could it be a blushish-white star since we are adding blues to this white object?  I doubt it since the amount of blues, along with all the other colors in diminishing amounts, are not enough to cause us to see anything but white.  Part of this reasoning is supported by another eye phenomena known as color constancy.  Our brain likes to make light sources appear to be white.  Turn your car’s headlight on during a sunny day and notice how it appears yellow, but turn it on at night and our eyes see it as white.

Since the Sun is alone in space no other light source will trick us in seeing anything other than a white star. Yet there is more evidence for a white Sun.

The Sun is a ball of gas and the layer that we see is the photosphere.  As we look into the central portion of the Sun’s disk we are able to see deeper into its atmosphere.  As we peer into deeper regions of the Sun, we are seeing hotter and hotter gases.  The Sun’s surface temperature is about 6,390K in the central zone.  As we look to the limb of the Sun, we see only the very top of the photosphere where the Sun is only 5,000K.

This temperature gradient is part of what is known as the center-to-limb variation (CLV).  It is important to us because if the Kitt Peak image is not yellow at the limb, at 5000K, then there is really no hope, once again, of the Sun ever appearing yellow.  [In 4 or 5 billion years, that will be a different story.]

But, what happens when we add those atmospheric blues into the hotter, central disk region.  Will this portion of the disk appear bluish white?  I don’t think so, but there is that possibility.  Color models do indicate that objects at this temperature should look blue.  Until someone goes up into space and uses some simple attenuator (a SAD, perhaps) we may never know.

Nevertheless, until that day, our Sun should be regarded as a white star as it illuminates the entire solar system.    Hopefully, artists will take it from here and will occasionally portray it in its true color.  Hopefully, also, they don’t always do this since I also like seeing a colorful Sun, just not all the time, please.

Allow me to leave you with a somewhat true color representation of our Solar system, for even the planets (especially Venus) are portrayed poorly by most others.]

BTW, the fun doesn't end here. Since the Sun is still classified as a yellow dwarf, yet it is really white, now what? Pluto was an easier correction. :)