Dan Peterson
Here’s a question for your buddies at the next golf outing or bowling league night: Are we more active because we drink more or do we drink more because we’re more active? Recent research showed that there is a correlation between the two, but could not offer a solid reason.

Either way, another study claims the combination of moderate alcohol use and exercise will help our hearts more than just choosing one over the other.

Michael French, a health economics professor at the University of Miami, and his colleagues dug into data from the 2005 Behavioral Risk Factor Surveillance System, a yearly telephone survey of roughly 230,000 Americans, and found a surprisingly strong positive correlation between the levels of alcohol intake and exercise.  For both men and women, those who drank at least some alcohol exercised 7.2 minutes more per week than non-drinkers. 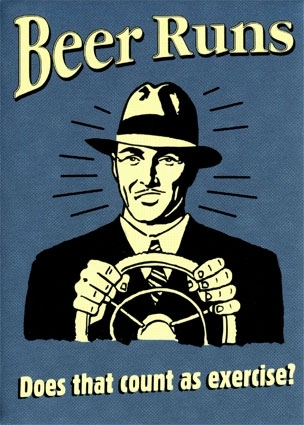 While that may not seem like much, the study showed that the more booze, the more minutes spent sweating. Light, moderate, and heavy drinkers worked out 5.7, 10.1 and 19.9 minutes more per week, respectively. Also, drinking resulted in a 10.1 percent increase in the probability of vigorous physical activity.

Now, that doesn’t mean that these folks were drinking while exercising, nor that it was necessarily good for them to engange in more than light drinking. Instead, French and his team, who have studied many facets of alcohol abuse and its triggers, are trying to make sense of this correlation that seems too strong to ignore.

French suggests that heavy alcohol use may be masked by the appearance of a healthy lifestyle and cautions physicians not to jump to conclusions.

“For example, taking into account only the patients’ levels of physical activity and perhaps diet would overlook potential alcohol use problems that could be detected and treated,” French writes. “Physically active individuals who engage in problematic drinking are often ‘‘healthy looking,’’ because alcohol use consequences are sometimes delayed.”

The study appears in the September/October issue of American Journal of Health Promotion.

Maybe we exercise more because we know how many calories those beers and mixers are adding to our waistlines. Even so, Danish researchers found that we’re still better off combining moderate alcohol consumption with exercise.

Morten Gronbaek, epidemiologist with Denmark’s National Institute of Public Health, and his team surveyed 12,000 people over a 20-year period to determine the cardiovascular effects of alcohol use and exercise. They divided the population into four groups: those who did not drink or exercise; those who had both moderate levels of alcohol use and exercise; and those who either just drank or just exercised at moderate levels.

The group with the highest risk of fatal ischaemic heart disease, a form of heart disease characterized by a reduced blood supply to the heart, were the non-drinking, non-exercisers. Choosing either moderate drinking or moderate exercise provided a 30 percent decrease in risk factors. However, drinking and exercising, (not necessarily at the same time), showed a 50 percent lower risk.

Their findings were detailed in the European Heart Journal.

“Being both physically active and drinking a moderate amount of alcohol is important for lowering the risk of both fatal IHD and death from all causes,” Gronbaek concluded.  Of course, the key is moderation, defined in the study as one drink per day for women and two per day for men. Also, Gronbaek warns that there is no heart benefit until a certain age.

“You wouldn’t advise everyone to drink,” he said. “You shouldn’t even think about doing it until age 45 or 50. There’s absolutely no proof of a preventative and protective effect before age 45.”